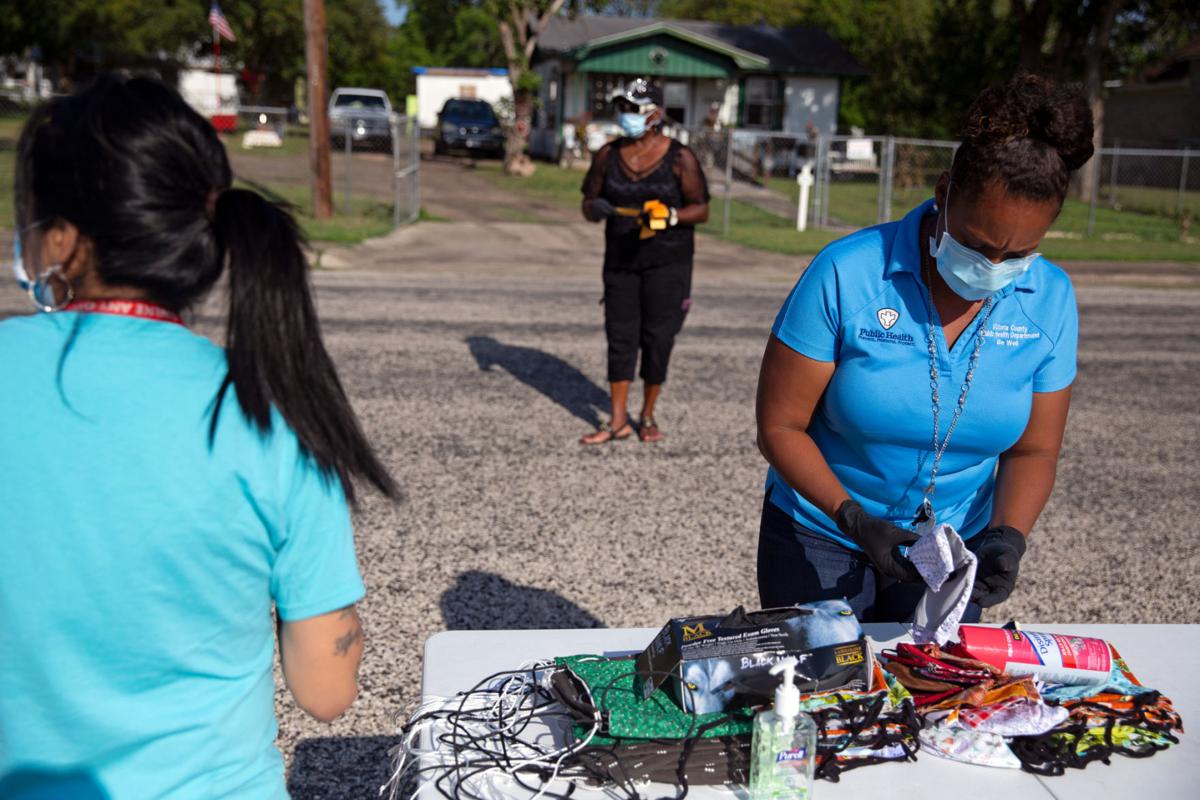 Jodi Sandoval, community health worker at Victoria County Public Health Department, right, with the help of volunteers work to distribute face masks to members of the community near F.W. Gross Elementary School on Victoria’s Southside. The mask distribution was May 14. 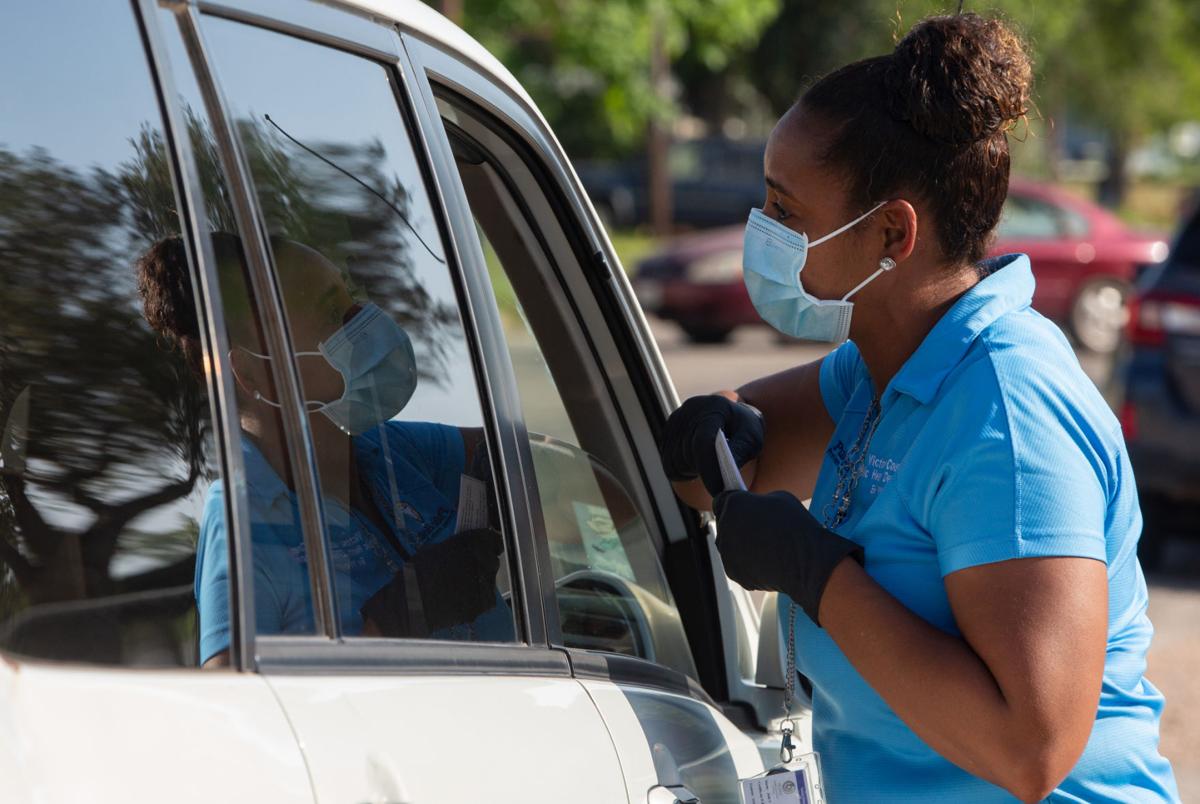 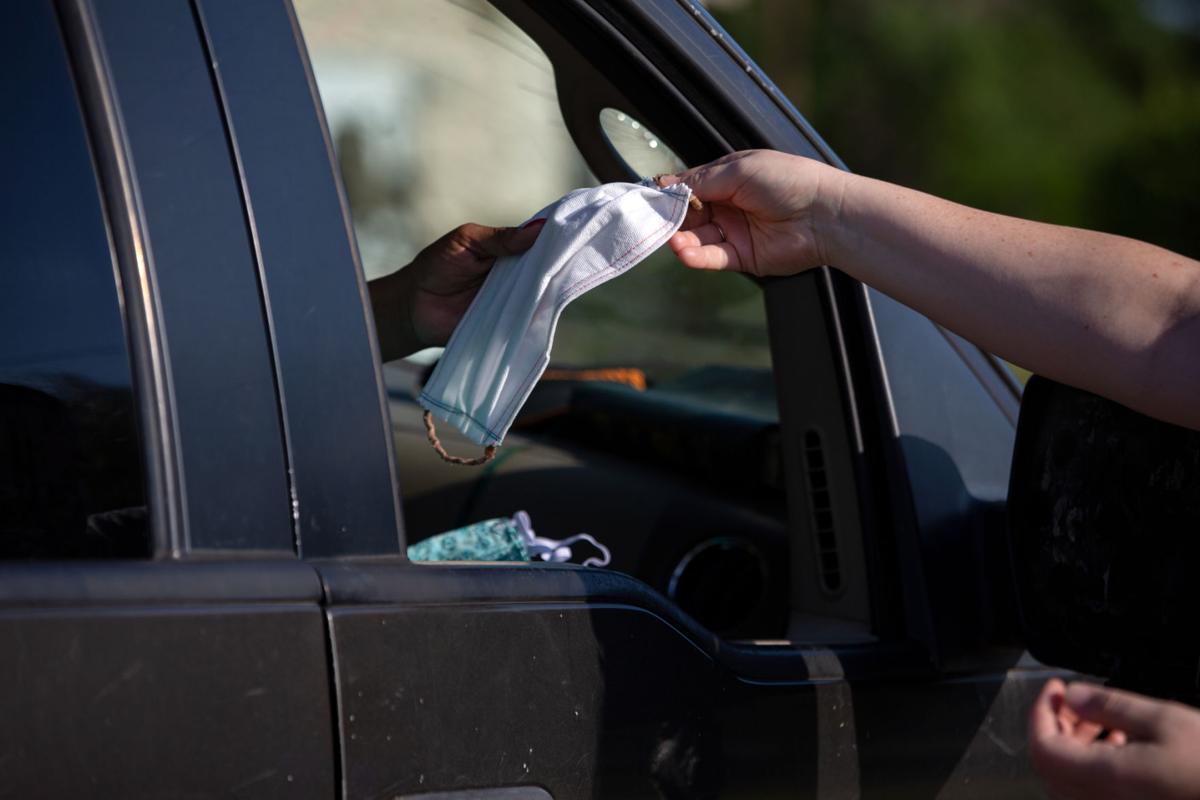 A volunteer hands a face mask to a driver in a pickup near F.W. Gross Elementary School on Victoria’s Southside. The mask distribution was May 14. 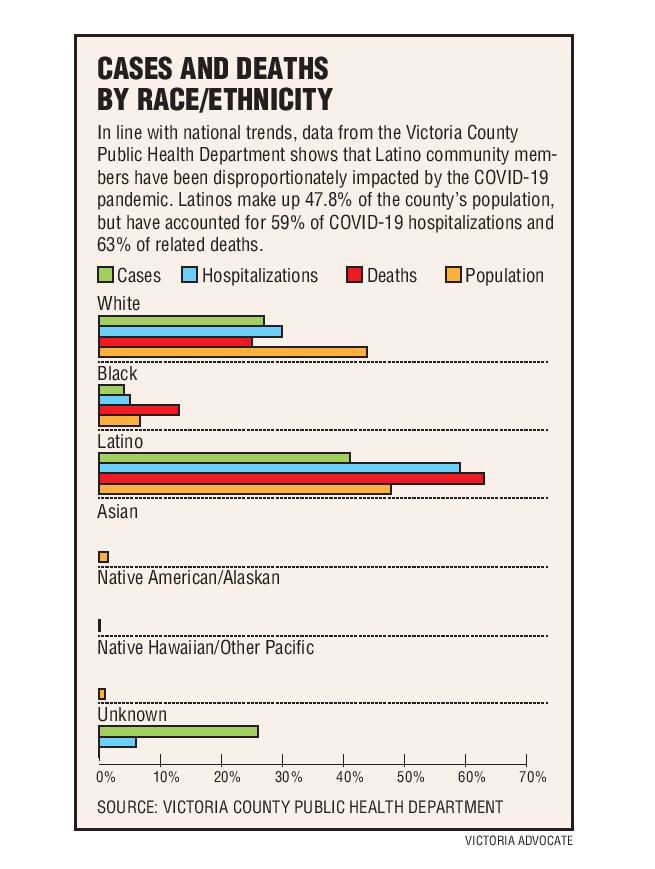 Jodi Sandoval, community health worker at Victoria County Public Health Department, right, with the help of volunteers work to distribute face masks to members of the community near F.W. Gross Elementary School on Victoria’s Southside. The mask distribution was May 14.

A volunteer hands a face mask to a driver in a pickup near F.W. Gross Elementary School on Victoria’s Southside. The mask distribution was May 14.

“When this thing first started, I didn’t personally know of anyone that had the virus,” she said. “But now that the numbers are getting higher, all of a sudden it is just people all around me.

“It is frustrating because this was preventable. This shouldn’t be happening.”

As of Thursday, at least 20 to 25 of Ramos’ friends, family members and acquaintances had contracted the virus, she said.

Some were hospitalized, others quarantined at home. All of them are Latino community members, she said.

“A lot of Hispanics are diabetics; we’re known for that. But the people who I know who have been hospitalized with the virus, they didn’t have that,” she said. “They didn’t have underlying conditions.”

As the number of COVID-19 cases in Victoria County increased by more than 400% in June, data shows that residents of color have been hospitalized with COVID-19 and died of the virus at higher rates than their white counterparts.

Latino and Black community members, in particular, are bearing a disproportionate brunt of the pandemic.

Latinos make of 47.8% of Victoria County’s population, according to the U.S. Census Bureau. But data from the health department showed that they accounted for 59% of COVID-19 hospitalizations and 63% of residents who died with the virus, as of Thursday.

Making up 6.6% of the county population, Black residents accounted for 4% of COVID-19 cases and 13% of deaths.

Non-Hispanic white residents, who represent 43.9% of the population, accounted for 27% of COVID-19 cases, 30% of hospitalizations and 25% of deaths.

Those figures do not include 26% of the cases that are pending investigation, including 6% of hospitalizations, said David Gonzales, director of the Victoria County Public Health Department.

“Disproportionately, Hispanics have been more affected by hospitalizations, mortality and in general,” said Brittney Burgess, the county’s epidemiologist.

Burgess said county investigators ask each patient what their race or ethnicity is during the investigation process and explain that the information is used for surveillance.

“One of the immediate things we use it for is obviously pretty early on we noticed that we had a large Hispanic population, and so we ensured that at least two or more of our investigators were Spanish speaking,” she said. “If we have patients who only speak Spanish, we want to make sure they’re getting the same investigation standards and follow up.”

When the pandemic started, some politicians and public figures called COVID-19 “the great equalizer.” Researchers who study health disparities, and many individuals who experience them every day, knew that would not be the case.

The disproportionate impact on communities of color is not the result of biological underpinnings, behavioral failings or moral failings, said Dr. Wizdom Powell, a trained population health disparities research scientist and clinical psychologist.

Powell serves as the director of the Health Disparities Institute at the University of Connecticut.

“What is actually happening is that it is the conditions where racial and ethnic minorities find themselves living, working, playing, praying, getting their education and getting health care that puts them at higher risk,” she said. “These are longstanding, systemic issues.”

These issues have led ethnic minorities to more likely find themselves living in crowded households and food deserts, working in essential roles with more risk of exposure and lacking access to affordable housing, transportation and adequate health care, she said.

Real-time demographic data of COVID-19 cases is critical right now and in the months ahead, Powell said, because it pinpoints disparities and needs that are going unmet.

“It helps us become not only more precise in our response, but also reduce unnecessary expenditure waste,” she said. “If you want to achieve a good outcome, you have to have a proper diagnosis and the data is the diagnosis if you want to put it in medical terms.

“When we design solutions that are not taking into account the most vulnerable, we exacerbate disparities. The lack of access to clinics and services right in your backyard is a key catalyst.”

In Victoria County, the Victoria Community Health Center is the only clinic designed to serve the uninsured.

During 2019, more than two-thirds of the center’s patients did not have health insurance or had Medicare or Medicaid, according to data provided by Rafael De La Paz, the CEO of Community Health Clinics of South Central Texas. The majority of its patients were people of color.

Smaller, more rural communities tend to have fewer resources, De La Paz said. And even when the resources are there, a lack of community education can create a barrier between a resident and a resource.

That is an issue CHC of South Central Texas hopes to tackle in the near future, De La Paz said. The organization plans to add community health workers who will serve as links between the community and available health care and social service resources, he said.

“One of the things that we’re honing in on is value based payment or value based reimbursement, so a lot of this work really revolves around looking at social determinants of health,” De La Paz said. “That is one key component of health care that we sometimes forget, you know, what is that access to transportation, food security, housing and so on?”

Since the pandemic started, area nonprofits, organizations, groups and even the Texas Military Department have mobilized to try to meet underserved needs.

The Texas National Guard performed more than 1,200 COVID-19 tests at the Victoria Community Center and handed out stacks of masks to each patient.

With the help of other organizations, Christ’s Kitchen has been feeding up to 700 people daily and the Victoria school district has provided thousands of free meals to children.

Among other initiatives, Be Well Victoria and the Southside Community Coalition handed out masks in May to residents on the Southside of Victoria, which has been marginalized and underserved for decades.

Justin Urbano, who came up with the idea, said he wanted those residents to know someone cared about them. But there is a lot of needs that are still going unmet, he said.

“I think that we just need more leaders,” Urbano said. “We need people out front to show the disparities, to lead the way and help the community understand what is going on.”

Jodi Sandoval, a community health worker at the Victoria County Public Health Department with Be Well Victoria, has become one of those leaders on the ground during the past few years.

The Be Well Victoria coalition is a grant-funded initiative designed to address the issues that affect community members’ mental health and well-being. Since the program started, Sandoval said the focus has slightly shifted from mental health needs to addressing the environmental conditions that affect both mental and physical health.

Through her work, Sandoval said she has learned that the gaps between resources is what greatly prohibits access for Victoria residents who have been marginalized.

A person with diabetes, for instance, might get assistance to visit a doctor and get the insulin they need, but cannot keep it cold because they don’t have a home to live in, she said.

“Sometimes you can be so disconnected from the people you serve because you’re not allowed to go out and really hear what’s going on, so you’re coming at it from a top level of what we think people need,” she said. “And then when it gets down to the people that need it, for instance, having money to go to the doctor is great, but if I don’t have anywhere to put my medicine, then that doesn’t really help me.”

While environmental conditions have been a focus in the academic world of public health for a long time, Powell said a shift in the public perception of health is necessary for communities to fully address disparities.

“We have to stop thinking about health as just purely the consequence of a rational choice. These rational choice prisms or frames actually limit our capacity to think about the things outside of an individual’s control,” Powell said. “We need to move beyond simplistic explanations about why these disparities exist and embrace the fact that we are all impacted if these issues don’t get resolved.”

Sandoval, who said she would like to see more community workers on the streets connecting residents to resources, echoed Powell’s sentiment.

“The biggest thing to me is really just understanding that people can only choose from the choices put in front of them,” she said.

For Gulf Bend case worker Reese Justice, helping someone with their mental health can start with a simple conversation.