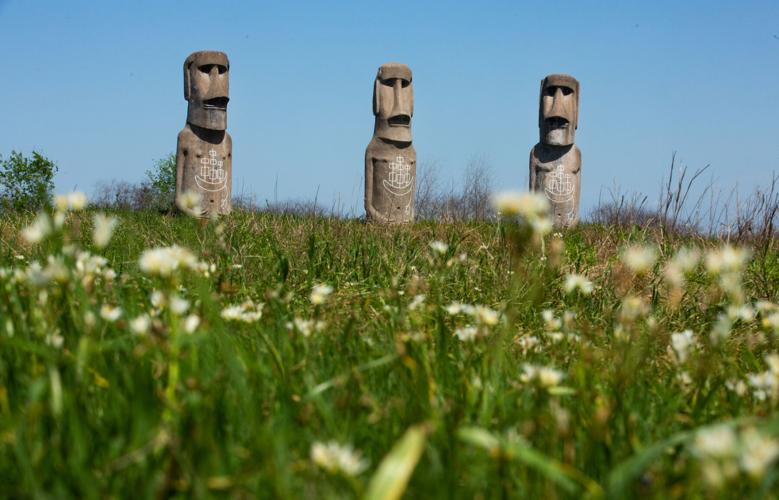 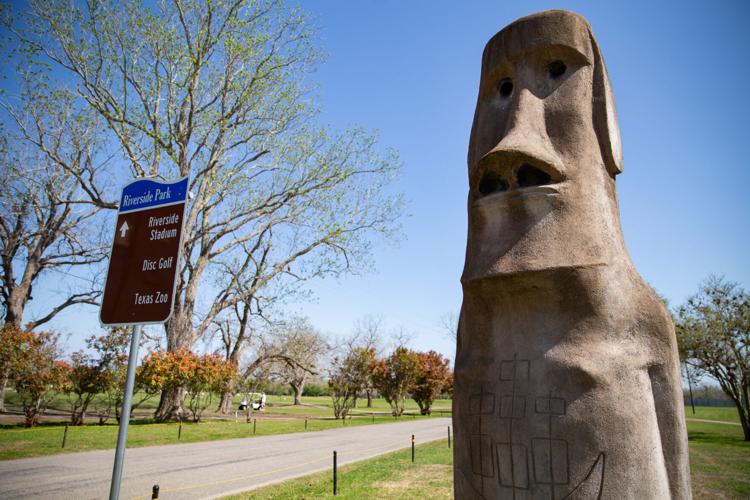 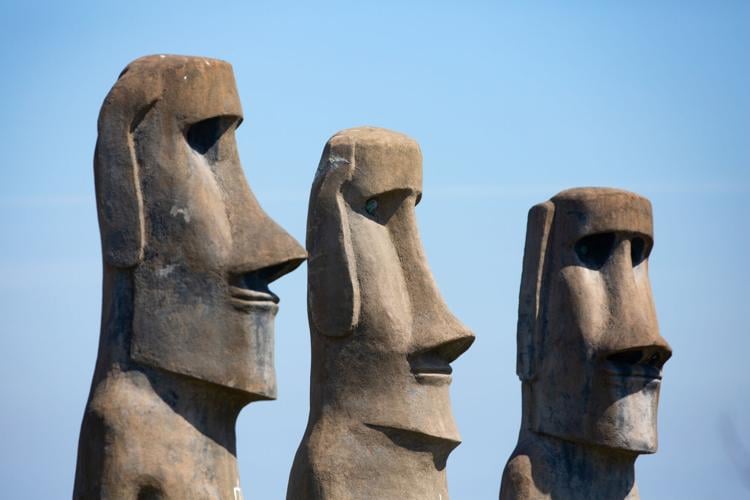 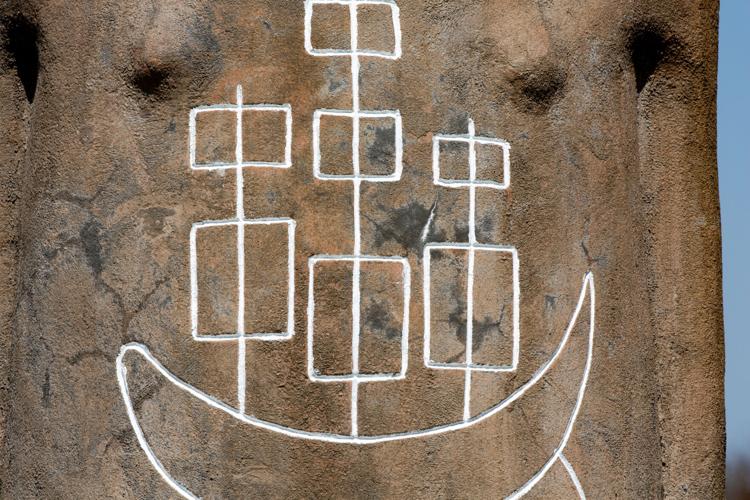 A marking depicting a ship on one of the Easter Island replica statues on Friday near Zac Lentz Parkway. 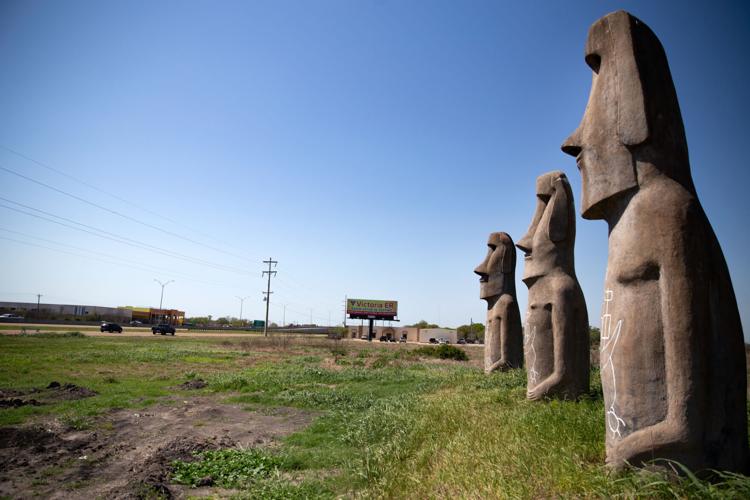 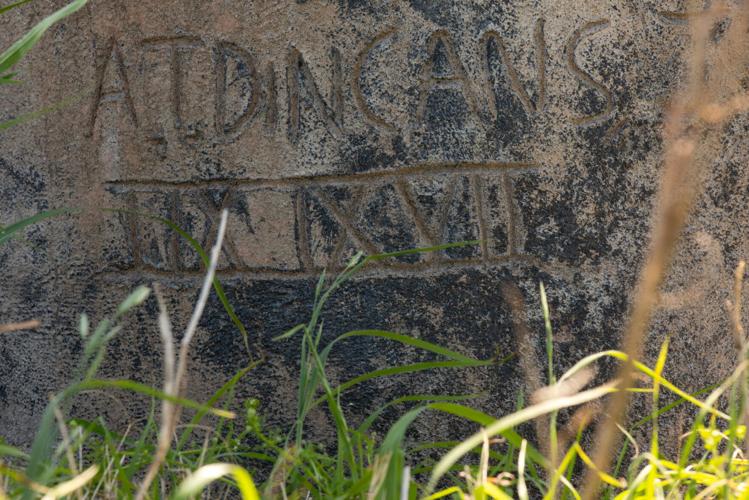 Etched into one of the Easter Island replica statues is the name of its designer, A.T. Dincans, along with the date of construction in Roman numerals.

Mystery has long surrounded the giant concrete heads that loom large along a Victoria highway.

Weighing in at 13,000 pounds each, the giant sculptures for decades have remained concealed in the Crossroads on one man’s private property while others have hidden in plain sight.

Although much smaller than the more than 30-foot-tall originals, the statues in Victoria and elsewhere in the Crossroads are nearly identical in shape to the original relics on Easter Island, a remote Chilean island in the southeastern Pacific Ocean about 2,200 miles off the coast of continental South America.

And just as much of the original statues’ history has been forgotten throughout the centuries, some of the history surrounding the statues in Victoria has escaped its creator, too.

Alvin “A.T.” Dincans, an 85-year-old Victoria native, said although he began building the stones as early as the 90s, he’s forgotten many of their surrounding details. Three of the 13-to-15-foot statues were made in the past few years.

As Dincans ages, he does not anticipate building more. The process requires many hours of work, lots of cleaning and the mixing hundreds of pounds of concrete.

Dincans has made 15 Easter Island replicas, all of which stand in the Crossroads.

Three are visible along the northeastern side of Victoria’s loop, just south of the intersection of Zac Lentz Parkway and Salem Road. Five are at Dincans’ Seadrift bay house and six are on Dincans’ ranch. In Riverside Park, drivers might easily miss the one that stands just north of Riverside Stadium at the intersection of Memorial Drive and McCright Drive.

Dincans cultivated a fascination for the Easter Island statues during adulthood, and that fascination inspired him to make his own versions of the heads.

“I can admire what other people have done,” he said.

Unlike the original volcanic rock statues, the replicas were sculpted from concrete, which should allow them also to stand the test of time.

Once his concrete has set, it would take a jack hammer to try to take them apart, he said.

While transporting one statue to his bay house, a statue fell onto the roadway. It didn’t even get a scratch, he said.

Dincans grew up on a ranch with about 500 head of cattle about 12 miles from Victoria. The longtime businessman has owned various businesses and properties throughout the years, including a pecan orchard as well as boating and plumbing businesses.

Over the years, the statues have stayed hidden right under the noses of many Crossroads residents.

Karen Peterson, said she and her husband have lived in Victoria for years and never noticed the statues. They didn’t have any idea how they got there or who built them.

Jo Ellen Adams, who works as an office manager at Jung Granite & Tile next door to the statues along the loop, said she and the owner of their business didn’t know how the towering concrete mysteries had gotten to the empty lot just south of them. The only thing they knew was that their creator’s last name was “Dincans.”

But a cryptic enscription on the park’s sculpture yields some answers.

On the back of that statue, the roman numerals “I IX IX VII” stand for each number in the year 1997 — when Dincans built the statue. Also carved into its back in Arabic numerals is the date Dincans donated and moved the statue to the city of Victoria’s Riverside Park — Feb. 24, 1998.

Strangely, it wasn’t until Dincans erected his statues along Zac Lentz Parkway about six to eight months ago that the city began receiving inquiries about the giant stone heads in town.

Other callers have inquired about purchasing a statue or having one commissioned, to which Dincans said he will not do. When he first began building them, he said people would contact him about buying one. Now, it has been years since anyone has asked him.

To build the statues, he said, you have to like doing it.

When Dincans first became enthralled with the faraway structures, he checked out a book from the Victoria Public Library to learn everything he could about their design and history.

One design element he focused on was the drawings on their bellies that depict ships and turtles with fishing lines. This is similar to what the residents of Easter Island, or the Rapa Nui people, had painted or etched into their statues as far back as 700 to 850 CE, according to Encyclopedia Brittanica. The chiseled facial structures and long ears, also featured on Dincans’ creations, are design elements from the original Polynesian statues.

And similar to the Polynesian statues, Dincans does not think his statues are going away anytime soon.

3 Easter Island statues on the loop:

It is facing north at the intersection of Memorial Drive and McCright Drive and north of Riverside Stadium.