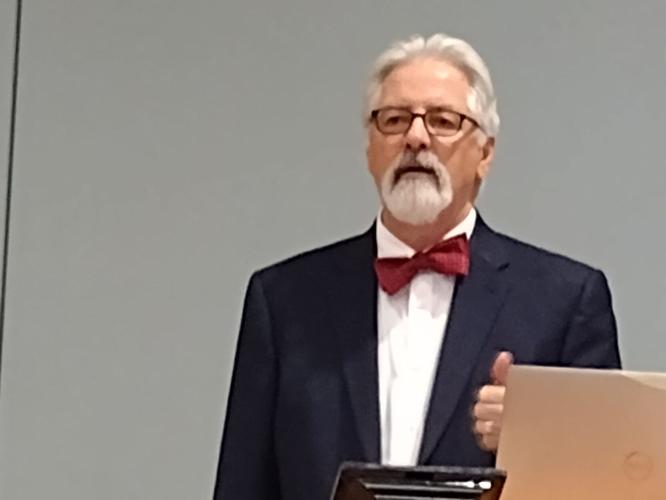 Tom Long, managing director of San Antonio's SATX economic-development group, talks to the Victoria Economic Development Corp. about what is possible in Victoria. He spoke at the VEDC's annual meeting on Thursday, Nov. 3, 2022, at the University of Houston-Victoria. 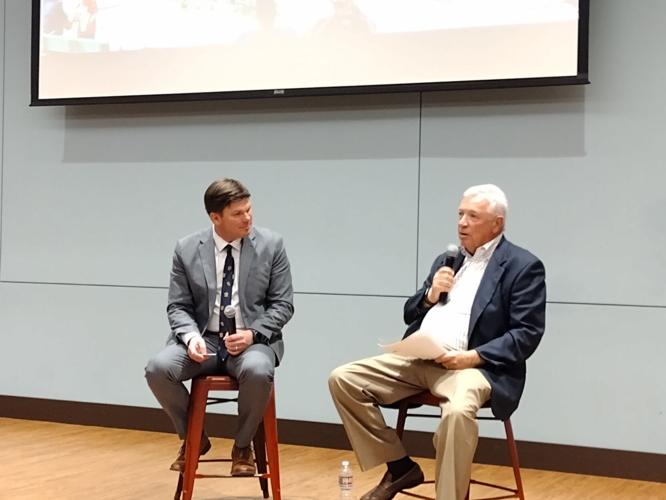 Jonas Titas, left, president of the Victoria Economic Development Corp., speaks with the groups founding chairman, Lee Swearingen, about its formation 40 years ago. They spoke at the VEDC's annual meeting on Thursday, Nov. 3, 2022, at the University of Houston-Victoria.

Victoria's public-private economic-development group learned a bit on Thursday evening about its past, and where it might be heading.

Taking a look at a crystal ball, the Victoria Economic Development Corp. invited Tom Long, the managing director of a similar public-private agency in San Antonio, SATX, to talk about what is possible, where his agency began and what can happen in a community like Victoria. Members also heard from the group's first chairman, Lee Swearingen, about its formation 40 years ago.

The discussions were at the VEDC's annual meeting Thursday at the University of Houston-Victoria. Beyond the discussions, a slate of directors and bylaw changes were approved.

SATX was launched in 1974, Long said, about eight years before the Victoria group. The two groups have many parallels in their origins and in their direction. His discussion detailed how a city having development problems could overcome them and attract new business and industry. Sound familiar? He thought so.

"The big corporations in town, picture USAA at that time, and Frost Bank, and others, said, 'Look, San Antonio cannot be a tourism town and a military town. Only. Forever. We need to diversify. And they put their money where their mouth is."

At the time, the San Antonio group had no public funding or public input. But that changed when businesses started leaving for bigger cities in Texas.

"I guess it was 2008. Something happened in San Antonio that the city woke up and said, 'Wait a minute, we need to be taking care of the businesses that are here in town. Anybody remember what happened? We had this small company in town called Southwestern Bell that grew into AT&T that overnight decided San Antonio's airport was too small for them. They had outgrown San Antonio, they moved to Dallas," Long said.

New public safety building could open by 2025, then Victoria City Hall will be revamped

So the public-private partnership was formed. Then a strange thing happened a few years later.

"Developing San Antonio, improving quality of place, I guess is the best way to say that, yes, from the city standpoint, that's infrastructure, that's roads, water, wastewater, that sort of stuff," Long said. "But to us, it's also the airport, and trying to do something to help enhance the airport. So that's an area we're into now as well. Again, AT&T said you're airport's too small, we're moving to Dallas."

Like the Victoria organization, his group took a regional approach to attracting business. That is a key goal of VEDC President Jonas Titas, who said at the annual meeting there are a few billion-dollar type deals on the precipice of success for the Crossroads as a region.

The regional approach, Long said, is the future for areas like Victoria.

As to the economic development corporation's past, Titas spoke with Swearingen. He said the VEDC came about because local business leaders noticed companies were not relocating to Victoria.

The former head of the Victoria Chamber, John Mosley, told it this way to Swearingen. "He said, 'Some reason, we're getting calls from companies but they never call us back. And people come into our office and get information. We never hear from them again."

Swearingen said he met with a manager from Central Power and Lite, which, at the time had a major role in any economic development, and one of his assistants.

He asked, "'How come we aren't getting any of the expansions that are going on and stuff has been talked about in Corpus and other places?' They sat here and he said, 'I'm gonna tell you guys one thing. I will never bring a person back. I will do everything in my power to make sure no companies locate in Victoria.'

"So anyway, that kind of inspired us to try to figure out what was happening," Swearingen said. Apparently, Victoria had developed a reputation that wasn't conducive to attracting businesses, especially those seeking concessions.

"One of the problems was that Victoria had a reputation if somebody walked into town with their hand out wanting anything, the city, the county, banks, they told them to take a hike on down the road. We're not a community that gives out."

The city needed to rebrand itself, Swearingen said.

Business leaders met in the offices of Tom O'Connor and recruited an economic-development expert from The Valley, John Roberts, and agreed to form the VEDC with a $200,000 infusion and a two-year commitment from Roberts.

Roberts said he was impressed. "He said that's the kind of leadership a community needs when the money steps up and says you got it and we were able to hire him. By the way, at that time Victoria wasn't known anywhere, on any map as far as economic development. We didn't exist. Those site-selection people knew nothing about us or anything like that."

Since then, the VEDC has helped attract major companies and employers, such as Caterpillar. And leaders said among the community's assets that helped attract such powerhouses is Victoria College, the University of Houston-Victoria, hospitals like Citizens Medical Center and DeTar Hospital.

Titas said to keep an eye out, because from the past, moving to the future, there's more economic development to come.

Planning agency more than a bunch of bureaucrats — it runs 911, bus system and more

Founded in 1968, the GCRPC helps seniors, operates the 2-1-1 hotline, runs the 9-1-1 dispatch center, helps member agencies and groups with planning and economic development and even dabbles in assisting with Homeland Security.