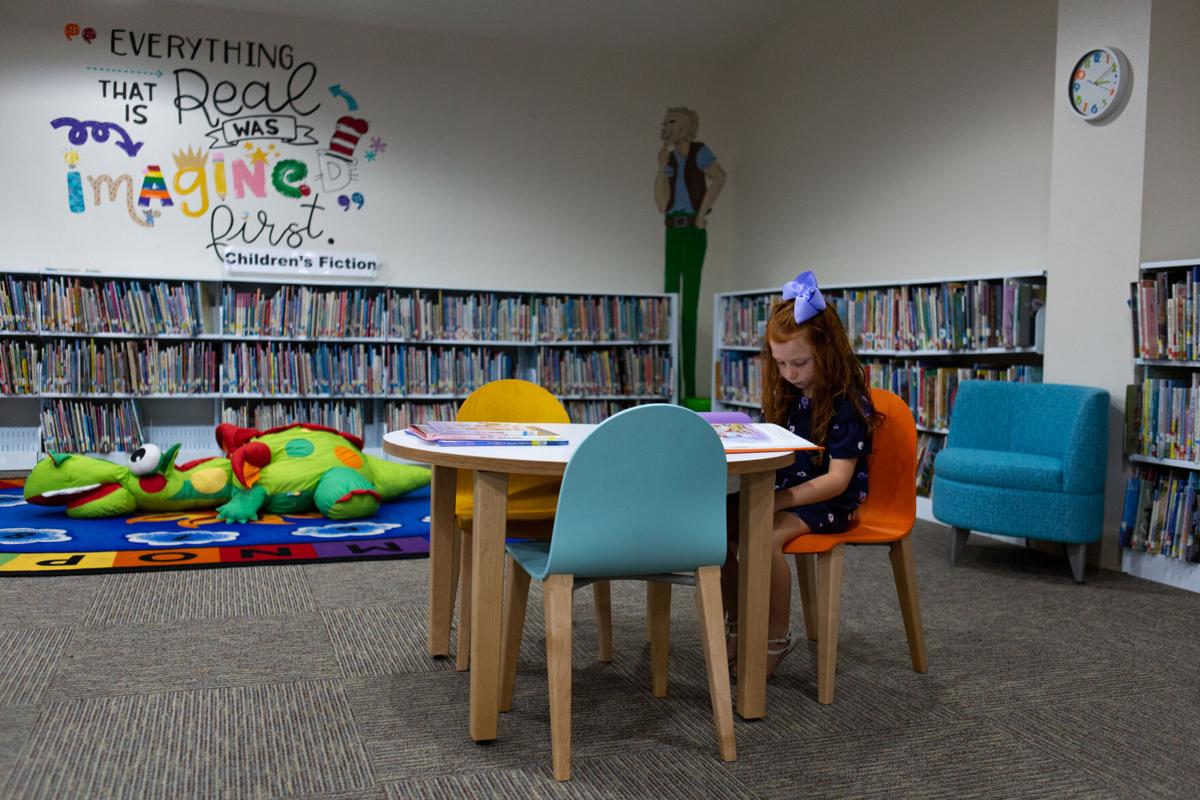 Maddox Wallace, 5, reads a book in the children’s section at the Goliad County Library on Thursday. 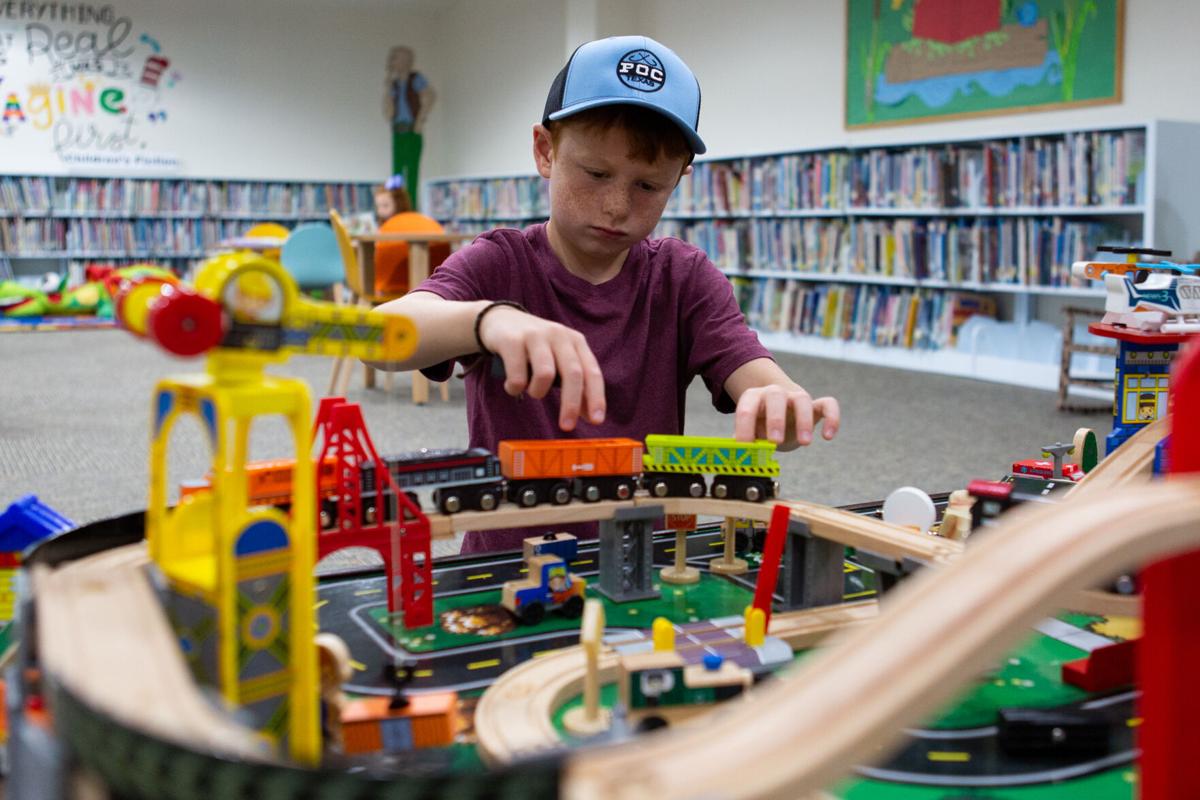 Corbin Wallace, 8, plays with a train in the children’s section at the Goliad County Library on Thursday. 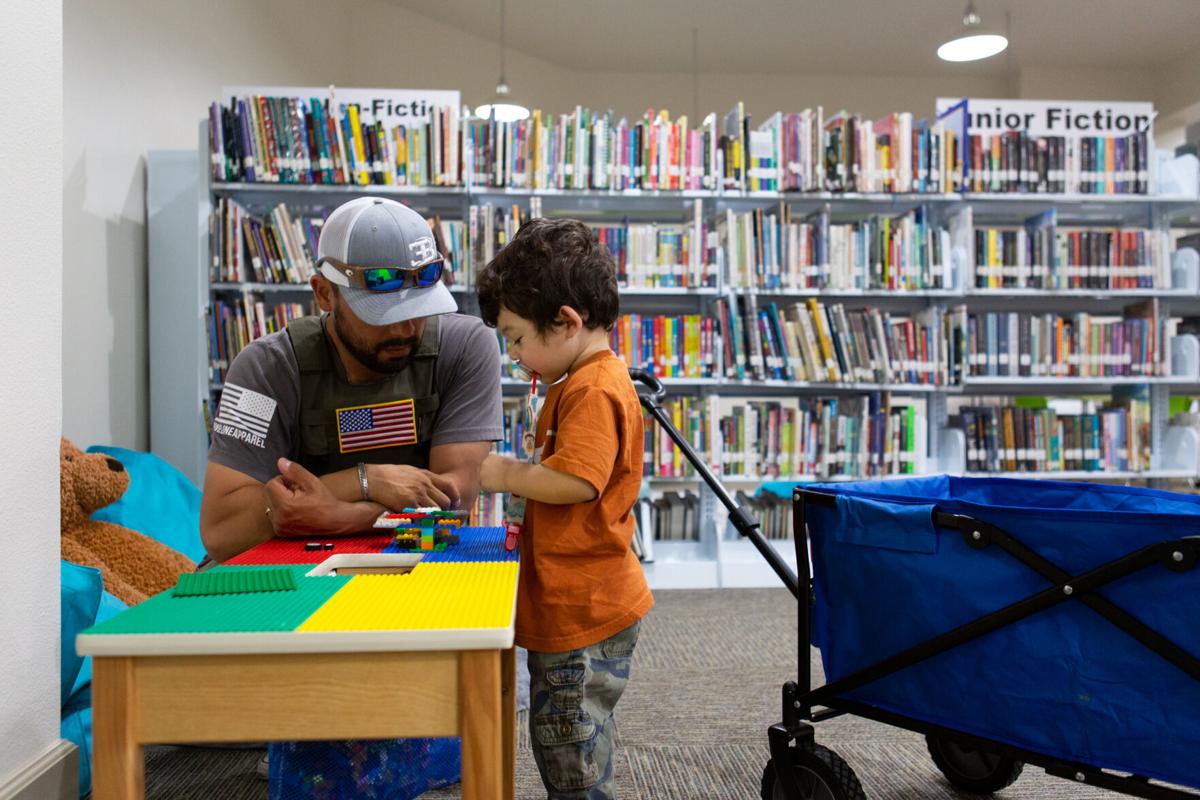 Ezra Olvera, 2, plays with Legos with his dad, Saul Olvera, in the children’s section at the Goliad County Library on Thursday. 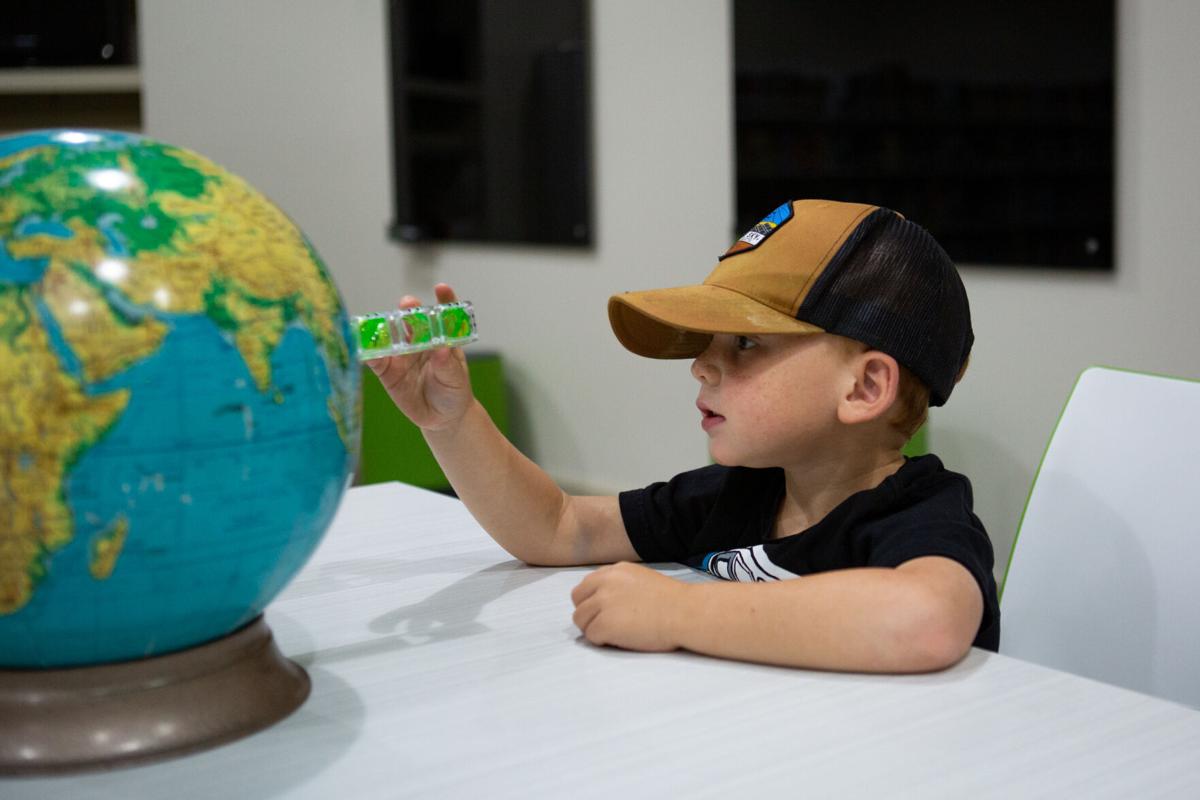 Landon Wallace, 4, plays with a globe inside the Goliad County Library on Thursday. 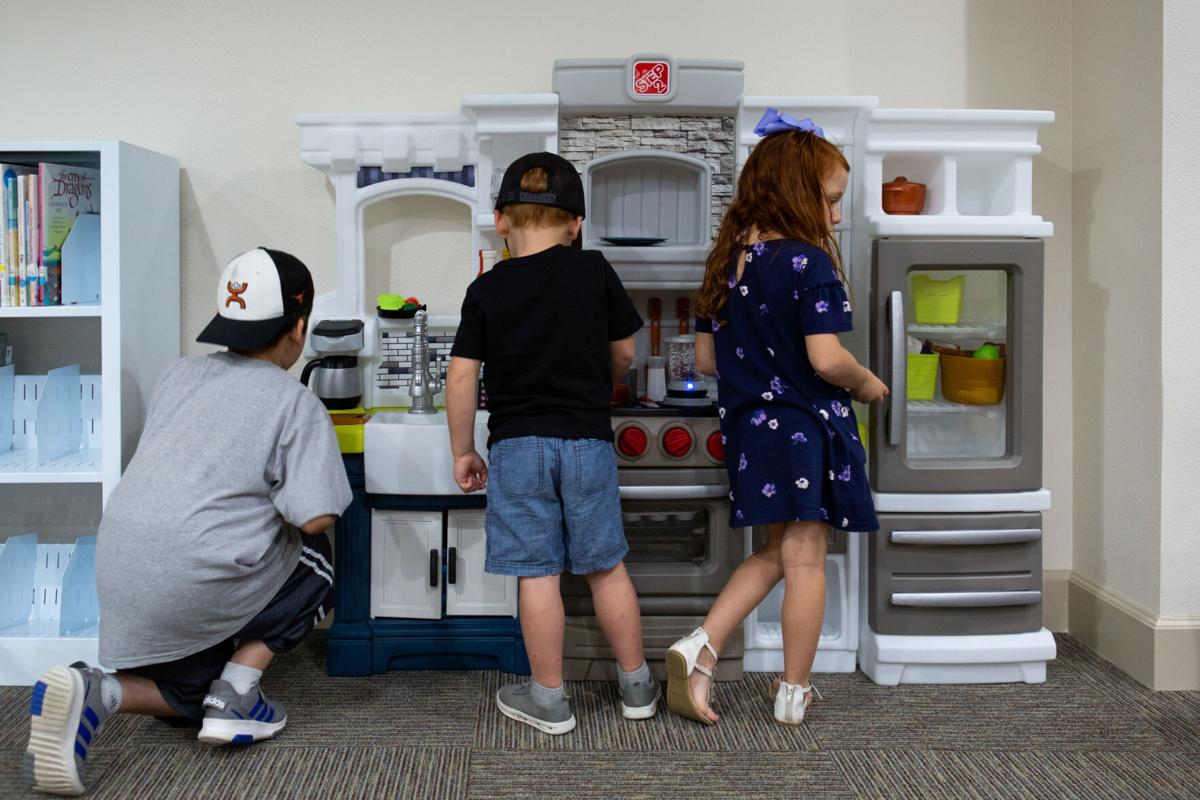 Caleb Olvera, 7, left, Landon Wallace, 4, middle, and Maddox Wallace, 5, play at the kitchen set in the children's section at the Goliad County Library on Thursday. 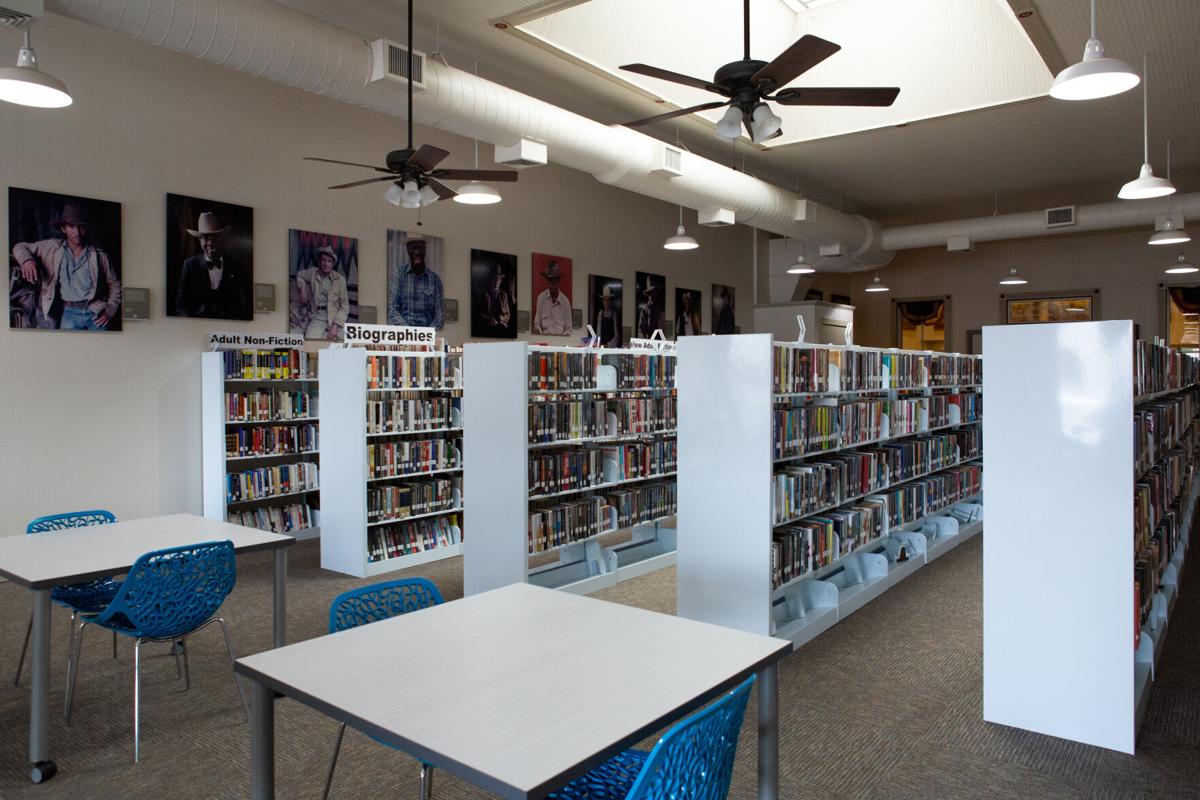 View of the adult book section inside the Goliad County Library. 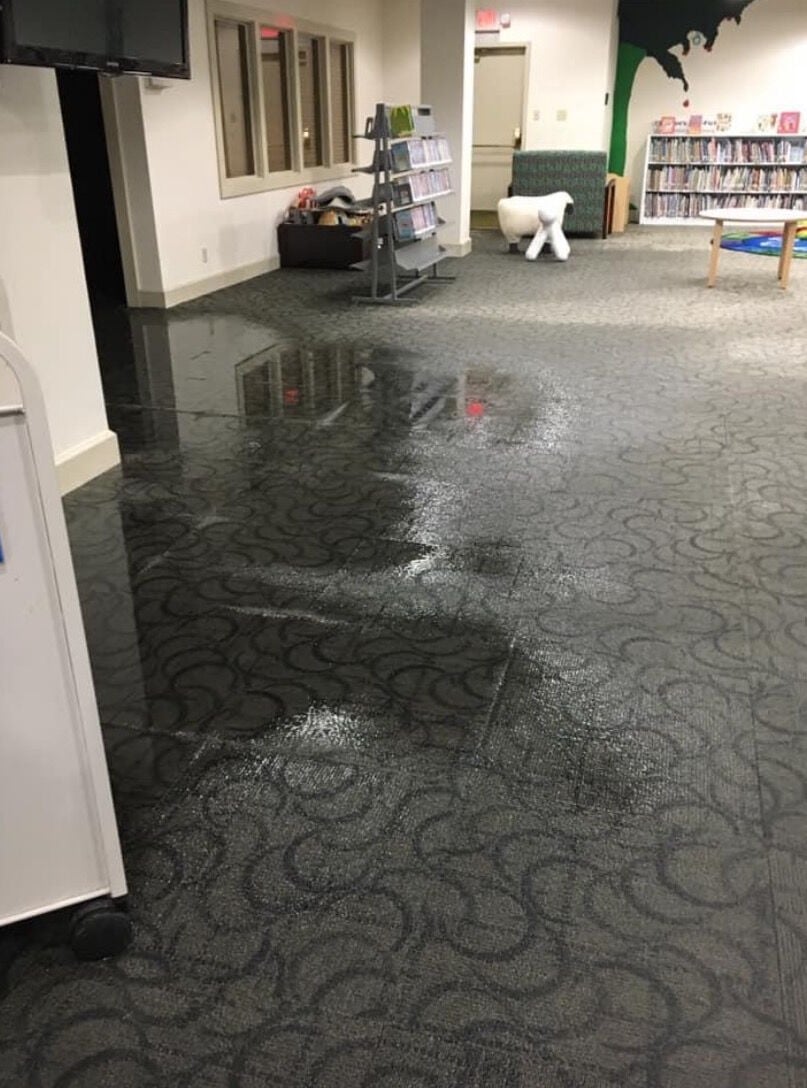 Maddox Wallace, 5, reads a book in the children’s section at the Goliad County Library on Thursday.

Corbin Wallace, 8, plays with a train in the children’s section at the Goliad County Library on Thursday.

Ezra Olvera, 2, plays with Legos with his dad, Saul Olvera, in the children’s section at the Goliad County Library on Thursday.

Landon Wallace, 4, plays with a globe inside the Goliad County Library on Thursday.

Caleb Olvera, 7, left, Landon Wallace, 4, middle, and Maddox Wallace, 5, play at the kitchen set in the children's section at the Goliad County Library on Thursday.

View of the adult book section inside the Goliad County Library.

GOLIAD — In late February, Claudine Janota walked into the Goliad County Library to find much of the building — including her office, the kitchen area and large children’s room in back — flooded with water.

“I look down there, and I think, ‘I see a lake,’” said Janota, the library’s director. “It was just devastating.”

During the weeklong winter freeze, which caused widespread power outages in Goliad and plunged the entire town into darkness, a water pump in the library malfunctioned, causing water to spew into the library for days on end. By the time Janota was able to check on the building, the damage was considerable.

But after several months of repairs and closures, Goliad’s library fully reopened to the community on Wednesday.

On Thursday afternoon, the library was bustling with patrons checking out books and children playing in the carpeted back area.

Among them were the two sons of Saul and Abigail Olvera, who recently moved from Brownsville to Goliad, where the father will be spending the next six months working on an oil pipeline.

As Caleb Olvera, 7, ran a make-believe restaurant at a table with another child who was spending the afternoon at the library, Ezra Olvera, 2, played with the library’s train set. Their father held a copy of “The Adventures of Tom Sawyer,” which he planned to read to his boys.

The couple had walked by the library several times, only to find it closed, so they were pleased when it reopened on Thursday.

“We didn’t realize that there’s all this space and options for the children,” Abigail Olvera said. “I’m enjoying this day.”

Caleb is homeschooled, so the library’s books and resources, including its 1,200-square-foot Texas history center, could be helpful with lesson planning, the mother said, especially because she wants her children to learn about the area’s history.

The construction of the history center, which was built in 2014 using money from a trust funded by the J.A. White family, indirectly led to the flooding that occurred this February, Janota said.

When that room, which features a restored 19th-century mural from a local dry goods store, was added, the contractor cut a pipe that provided water for the library’s kitchen, Janota said. The pipe eventually had to be rerouted up a wall, which required the installation of the pump that malfunctioned during the freeze.

The library’s kitchen was removed during the recent renovations in order to prevent the library from flooding again in the future.

“We’re not going to have that problem again,” Janota said.

Restoring the library to its current condition was a lengthy process, prolonged by both the sky-high demand for plumbing repair services after the freeze and negotiations with the county’s insurance adjuster.

In the days after the freeze, three of the county’s precinct crews helped pull up the wet carpeting. Eventually, the county was able to find a San Antonio contractor, the Gerloff Company, which not only replaced the carpet but cut and reinstalled the Sheetrock walls several feet above the floor level.

“We told them from the get go, we wanted it done right, and we wanted it done as quickly as possible,” said Rusty Friedrichs, the county’s auditor, who worked with Janota and other county officials to bring the renovations to completion. “I’m sure a lot of people are disappointed that it took that long, but considering everything that happened, I think it was done rather quickly, and it was done properly.”

The repairs ultimately cost about $145,000, Friedrichs said, all but $10,000 of which was covered by the county’s insurance policy.

The water damage forced the library to cancel its summer children’s program, which includes matinee movie screenings and presentations from educators and entertainers like the Texas Snake Man, for the second consecutive year.

The library’s staff had been looking forward to hosting the program, which previously drew about 100 children, in the newly expanded children’s area, Janota said.

However, the library is hoping to resume those activities next summer. In the meantime, the library’s history lecture series, which features presentations on local history, resumed in July. A presentation on the Karankawa tribe is planned for Aug. 19.

Friedrichs said he is glad to see the library fully reopened at last.

“In my opinion, they have done a really, really good job,” he said. “For a little town like Goliad, we have a really nice library.”

The Goliad County Library and the J.A. White Family Goliad Center for Texas History are hosting a history lecture series in the months ahead. All events are at the library, 320 S. Commercial St., unless otherwise indicated.

Sept. 16, 6 p.m. Donaley Brice on the Meir Expedition and the Black Bean Incident.

Sept. 30, 6 p.m. Patsy Light on the legacy of Dionico Rodriguez and the artisans of Trabajo Rustico.

Oct. 7, 6 p.m. at Oak Hill Cemetery An evening in the cemetery with various local speakers on the cemetery's "residents. Bring a lawn chair and comfortable shoes.