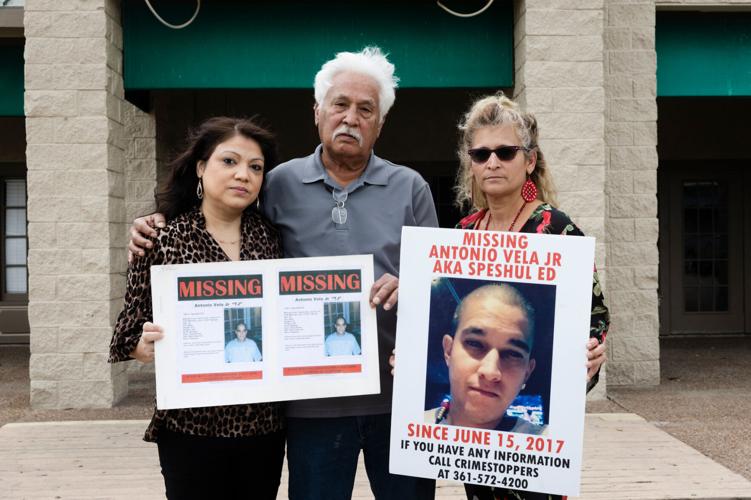 Kit MacAvoy/kmacavoy@vicad.com Michelle Vela, left, Antonio Vela, center, and Natalie Vela Thompson, pose with the posters they made after the disappearance of Antonio “TJ” Vela Jr., on Wednesday outside of Sports, the bar where he was last seen. 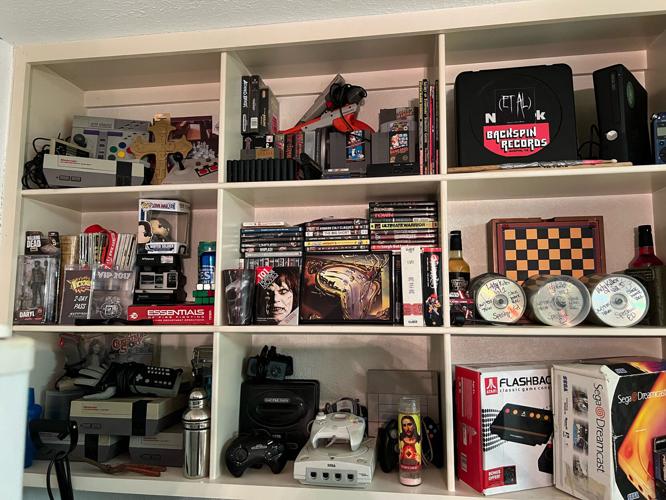 A collection of Antonio “TJ” Vela Jr.’s belongings are displayed at his family’s home in Mission Valley. 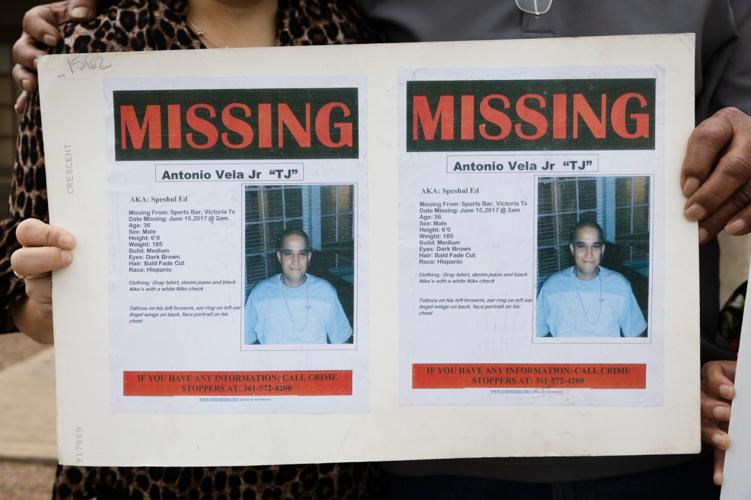 Michelle Vela and Antonio Vela hold up the flyers they made after Michelle’s brother, Antonio’s son, disappeared nearly five years ago. 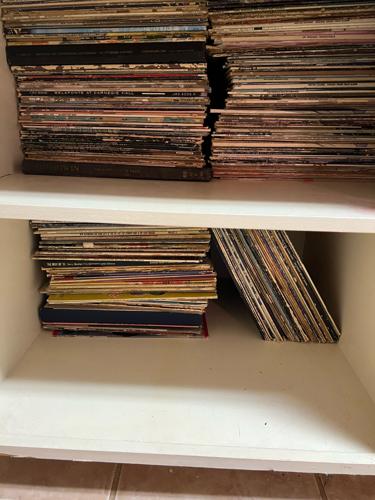 A collection of TJ Vela’s records. 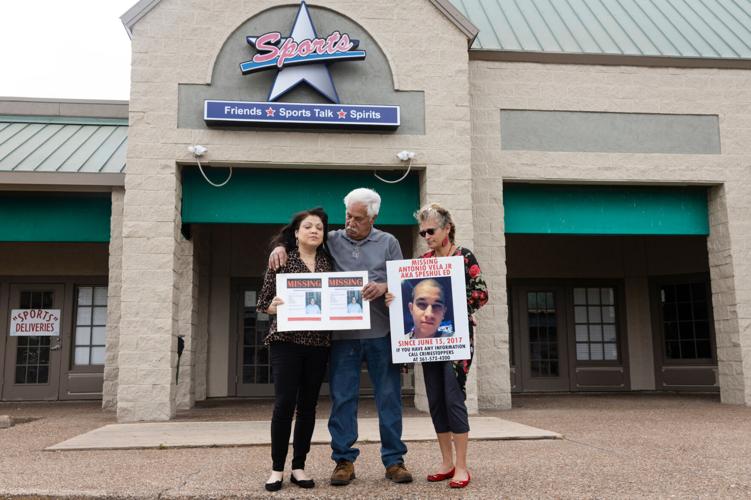 Kit MacAvoy/kmacavoy@vicad.com Michelle Vela, left, Antonio Vela, center, and Natalie Vela Thompson, pose with the posters they made after the disappearance of Antonio “TJ” Vela Jr., on Wednesday outside of Sports, the bar where he was last seen.

A collection of Antonio “TJ” Vela Jr.’s belongings are displayed at his family’s home in Mission Valley.

Michelle Vela and Antonio Vela hold up the flyers they made after Michelle’s brother, Antonio’s son, disappeared nearly five years ago.

A collection of TJ Vela’s records.

A day after he vanished, his car turned up in Inez.

A week after he vanished, more than 100 people bowed their heads in prayer at a Victoria bar, his last known location.

A month after he vanished, more than 30 people lined North Navarro Street, showing his photograph and the phone number for Crime Stoppers.

A year after he vanished, his family and friends returned to the site of his disappearance — and prayed again.

A year later, his family held a garage sale to pay for putting his face on billboards.

“Not knowing is what’s keeping the world from turning completely around for us,” said Natalie Vela Thompson, his older sister.

On June 15, 2017, Vela left Sports, a north Victoria bar, around 2 a.m. He told his friends he was going to get some food and head home. The next morning, his roommate found snacks and Vela’s cellphone on the floor of their garage. Vela and his car also were gone. He was 36 at the time.

In early April, Victoria Police Department officials said the investigation into Vela’s appearance was still open, and they are actively investigating all leads.

By most accounts, Vela, also known as “TJ” and “Speshul Ed,” was a popular guy. An avid and talented self-taught musician, he participated in rap battles around the state through the Texas Battle League.

But in the months that followed, his case came to the attention of Claudia Rivero, a Pennsylvania-based investigative journalist with a background in TV news who specializes in covering underreported missing persons cases. Rivero has spent years following Vela’s case, and she visited Victoria eight or nine months after Vela’s disappearance to investigate.

“I’ve always had an interest in these types of stories because, first of all, there are so many of them,” and the public only hears about a small percentage of them, she said. After someone disappears, it’s typical for media and public interest to move on.

But for families, she said, life stops in that moment.

Over the years and as attention waned, his family has made several attempts to put the spotlight back on Vela. They’ve tried to get on “Dateline,” “Nancy Grace” and even “Ellen DeGeneres.”

Then Rivero brought Vela’s case to “The Vanished.”

On March 14, followers of the podcast heard Natalie Vela Thompson share her brother’s story. It was the podcast’s 334th episode.

Rivero and Jones both stressed the importance of casting a wide net.

“In cases like this,” Jones said, “you never know where somebody’s gonna be that has information.”

Someone could have been passing through the area when they witnessed something without realizing its significance, she said.

With her podcast platform, “you have a chance to reach someone and jog their memory,” she said.

Vela’s case is one of many.

The National Crime Information Center had 93,718 active entries across the country in its annual Missing Person and Unidentified Person Statistics report. But few of these cases receive nationwide attention or capture the interest of internet sleuths.

“What’s important, again, is to get the story out there” to remind people that this person is still missing, and a family is waiting for answers, Rivero said.

Jones said that any piece of information — even if it seems irrelevant — might be the thing that helps investigators connect the dots.

“We’re not law enforcement,” Jones said. “We shouldn’t be the ones filtering what’s important and what’s not.” If the thought has crossed your mind, she said, you should report it.

Claudia Rivero said everyone should take a moment to put themselves in the shoes of the family of a missing person.

“Sometimes it’s hard to wake up,” said Vela Thompson. “You get to go on through your day, and you’ve got to keep on living life,” while hoping for something to change.

“He’s always in the back on your mind,” said Vela’s father, Antonio Vela. “It’s hard to not know something. Especially if you can’t see their face, or hear their voice.”

To remind herself, Vela Thompson listens to the music Vela recorded or watches the videos he uploaded to YouTube.

“Just to hear his voice,” she said. “He’s playing music. He’s playing the piano, just practicing on the piano. Just listening to and watching him with his fingers. It’s just these facial expressions, just to see that.”

Friend of missing man: 'We have no answers'

A year after Antonio “TJ” Vela Jr.’s disappearance, his family show no signs of slowing down in their search for answers.

I'm a staff photojournalist at the Victoria Advocate. I was raised in Virginia and went to the University of Oregon School of Journalism and Communication.