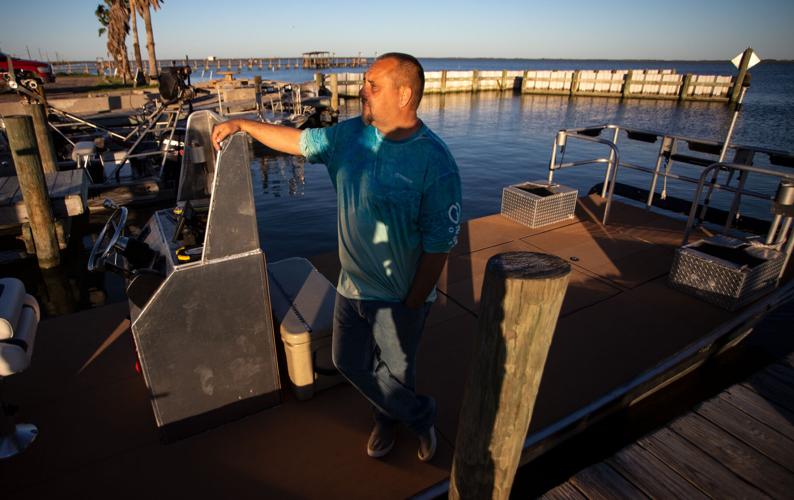 James Parbst stands on a boat watching the sun set Thursday at the St. Charles Bay Boat Launch in Rockport. 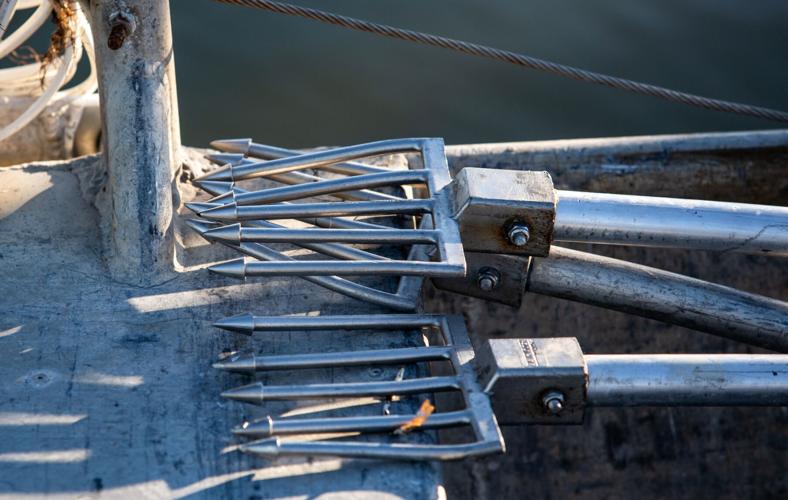 A set of flounder gigs used to spear flounder on James Parbst’s boat Thursday at the St. Charles Bay Boat Launch in Rockport. 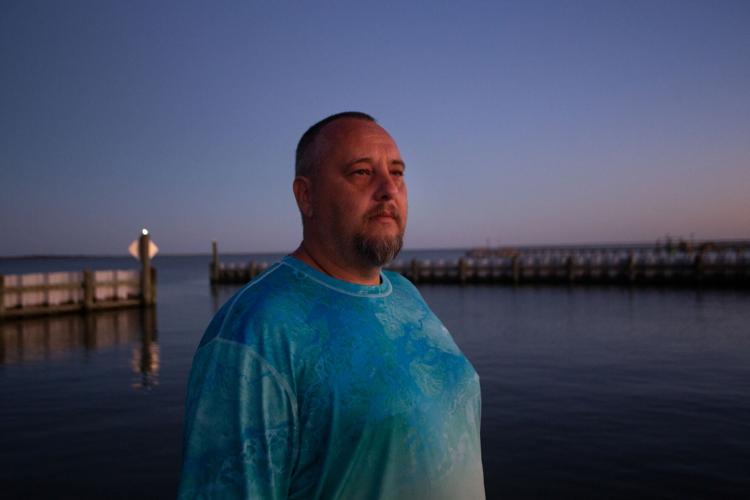 James Parbst looks out at the sunset Thursday at the St. Charles Bay Boat Launch in Rockport. 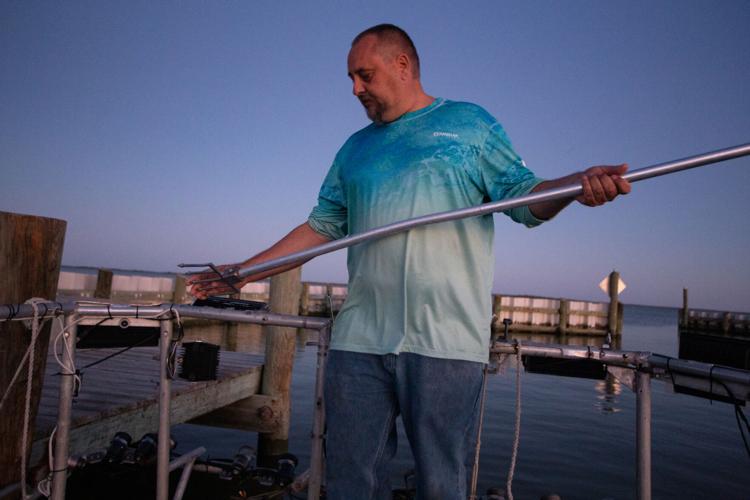 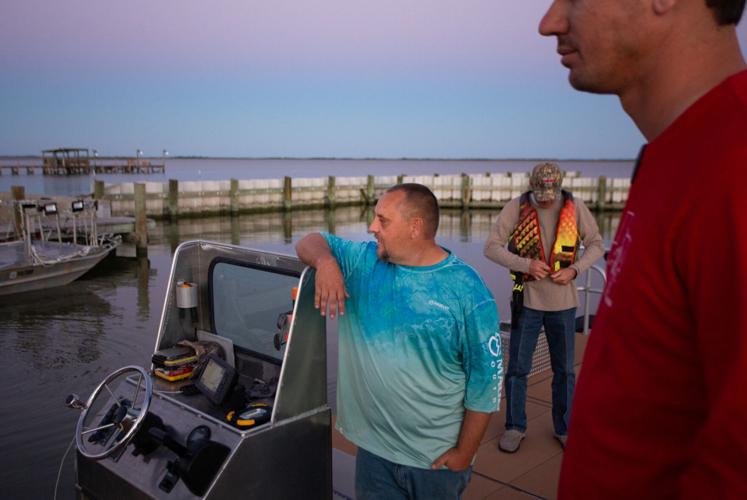 James Parbst hangs out with other fishermen Thursday at the St. Charles Bay Boat Launch in Rockport.

James Parbst stands on a boat watching the sun set Thursday at the St. Charles Bay Boat Launch in Rockport.

A set of flounder gigs used to spear flounder on James Parbst’s boat Thursday at the St. Charles Bay Boat Launch in Rockport.

James Parbst looks out at the sunset Thursday at the St. Charles Bay Boat Launch in Rockport.

James Parbst hangs out with other fishermen Thursday at the St. Charles Bay Boat Launch in Rockport.

ROCKPORT — As the sun set behind him, Capt. James Parbst stood with a handful of others at the St. Charles Bay boat launch Thursday evening, waiting for their customers to arrive. Friends for years, they passed the time inspecting each other’s boats, bemoaning the lack of some supplies on store shelves and roasting each other in good-natured fun.

Each of them gig flounder — a nighttime fishing method that catches the flat-bodied, saltwater bottom fish by staking them with a four-pronged spear, known as a gig. For many of them, leading guided gigging trips is their sole source of income.

However, for flounder fishers and guides like Parbst, this Sunday will mark the last day of the season before the Texas Parks and Wildlife Department enacts a new regulation that will close all flounder fishing from Monday to Dec. 14. The closure coincides with the fish’s annual fall migration from the bays to their spawning grounds in the Gulf of Mexico and is done in an effort to increase flounder populations.

The seasonal closure of flounder fishing is nothing new. However, this year brings new regulations and further restrictions.

According to the parks and wildlife department’s resource monitoring data, flounder populations have seen a long-term decline over the years, in part due to warmer winters over the last several decades. That decrease is something local anglers can talk about about even without the research.

“One thing for sure is the population has declined over the years, quite significantly,” said Parbst. “There’s only a fraction of the fish there was four, five years ago.”

Hang around the fishermen long enough and you’ll also hear them bemoan other changes in the area — dirtier water, crowded bays, ineffective regulations. However, Parbst isn’t necessarily against the closures.

“The additional closure is actually a very, very good thing because it’s gonna give almost all those fish a chance to go out there and spawn instead of making them easy pickings,” said Parbst.

However, the additional two weeks of closure will mean a possible monetary strain for many guides. Parbst charges anywhere from $450 to $700 for his trips, which can last anywhere from four to five hours. He takes people out nearly every night that weather allows, he said. He estimates the six week closure could mean missing out on anywhere from $20,000-50,000, when you include tips.

The declining fish populations have affected the industry in other ways as well, said Parbst. Most gigging guides used to do two trips a night, he said, and have up to six customers.

“Now, because there’s just so less fish in these bays, we all run one trip of up to four people,” he said. “So, ideally we would like to see that population somehow increase.”

Capt. Dan Pike, also known as Dan the Flounder Man, has been guiding gigging trips since 2009. He has been commercial gigging since 1981.

In fact, Pike said he can’t remember a year that was this bad before. Not only have flounder been scarce, but multiple weather related disturbances caused him to cancel a number of trips.

He is also frustrated with Texas Parks and Wildlife, saying he thinks they have done too little too late to help the flounder population. He said he’d like to see the two bag limit extended year round for flounders.

Both Pike and Parbst said they are concerned with another rule change that occurred in 2020. Then, the department changed the minimum size a flounder must be to be kept from 14 to 15 inches. Both men said they were concerned the change was resulting in more dead flounders.

“I think what Texas Parks and Wildlife Department has created is a big influx of fish mortality among fishermen in the early spring, just trying to find that 15 inch fish,” said Parbst. “Because when you look at a fish in the water, you just cannot tell whether he’s 14½ or 15.”

He said this is particularly bad in the spring when fish are generally smaller to begin with. He said he’s been behind boats and counted as many as 17 dead flounder that were just a smidge under the size limit. Both him and Pike said they would rather see the bag limit decreased to two or three year round in an effort to decrease the mortality.

“That’s not something we could ever potentially regulate,” said Julie Hagen, a spokesperson with the parks and wildlife department’s coastal fisheries division, of the possible increased mortality. She said they know there will always be byproduct, fish that are killed that don’t meet the size limit.

“But as far as population trends significantly decreasing by anglers catching the wrong size and throwing it over, we will never be able to get definitive scientific data on that,” she said. She urged anglers to be cautious and become familiar with the size requirements. But, she said, if you do catch one that’s the wrong size and throw it back into the water that’s not terrible for the ecosystem.

“You’re feeding the ecosystem,” said Hagen. “You put it back into the resource where you found it. Other animals are going to get that and you’re going to help other fish populations because now they have a free dinner.”