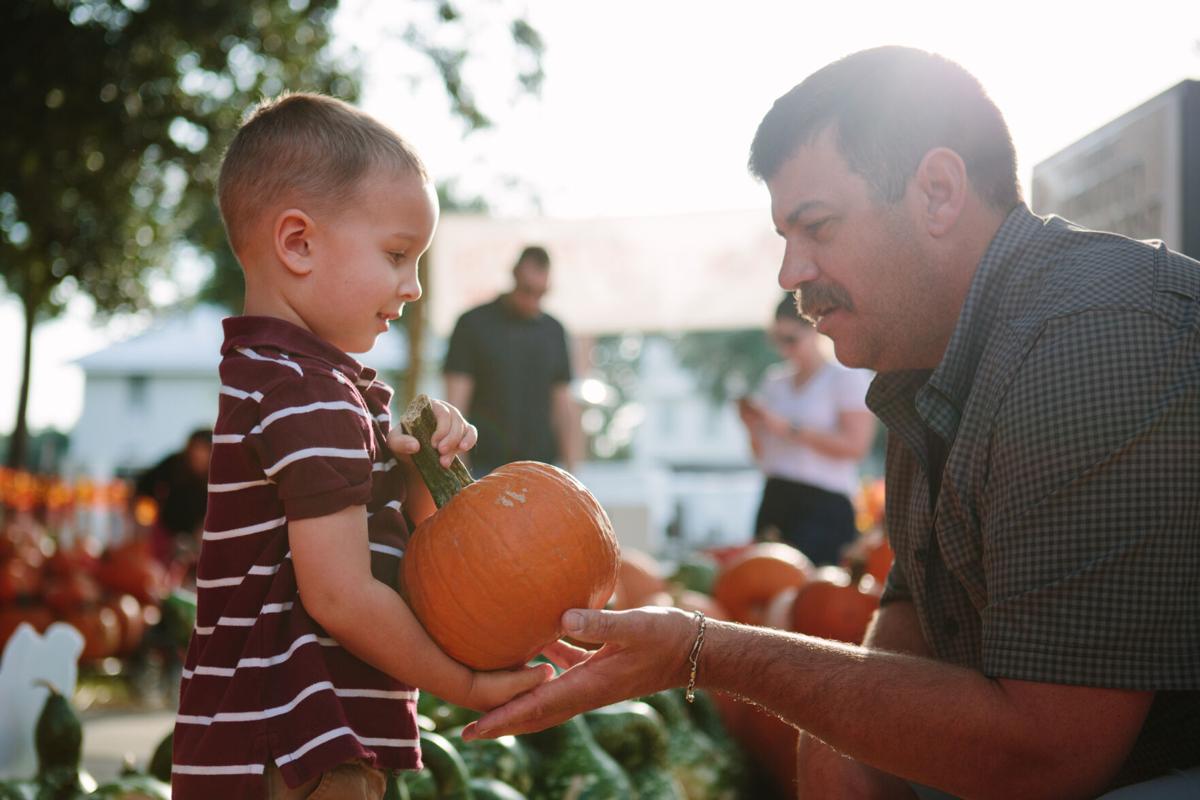 Grady Bundick, 2, hands his dad Jim a pumpkin while visiting the pumpkin patch at First United Methodist Church in Victoria on Monday. 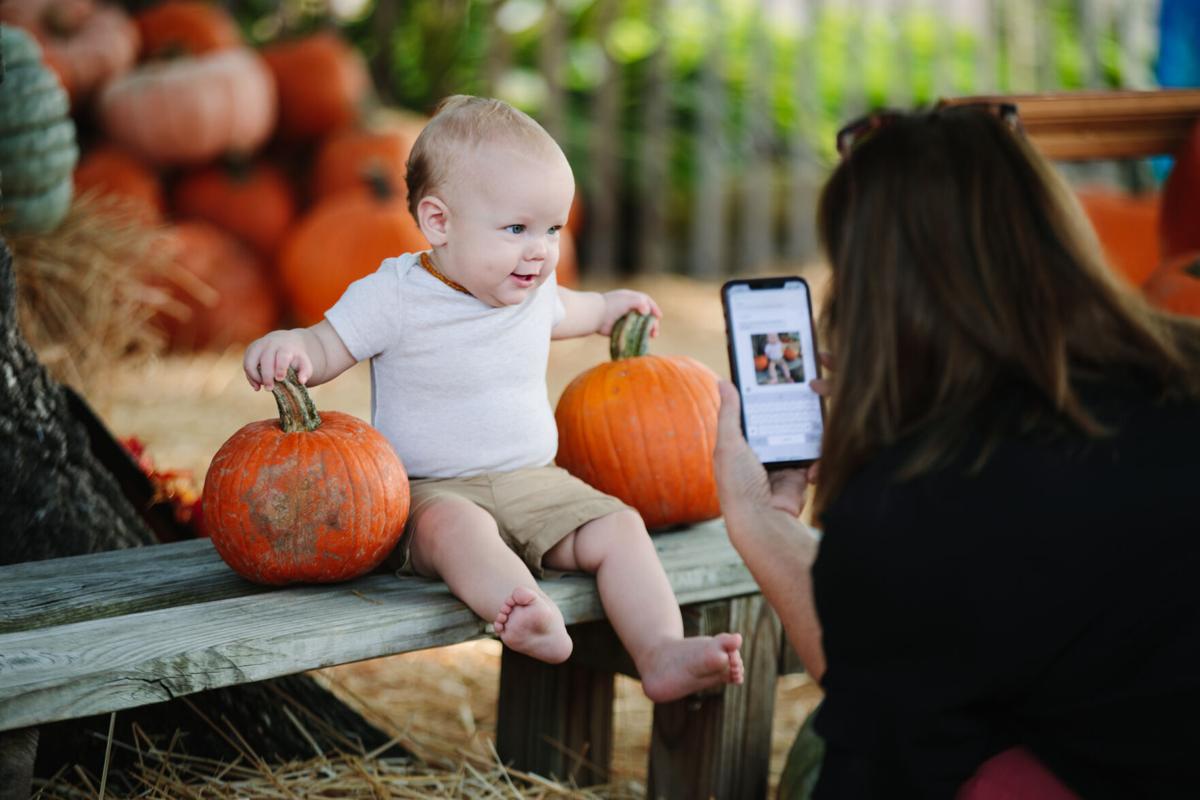 Carol Madden takes a photo of her 9-month-old grandson Connor Couch at the pumpkin patch. 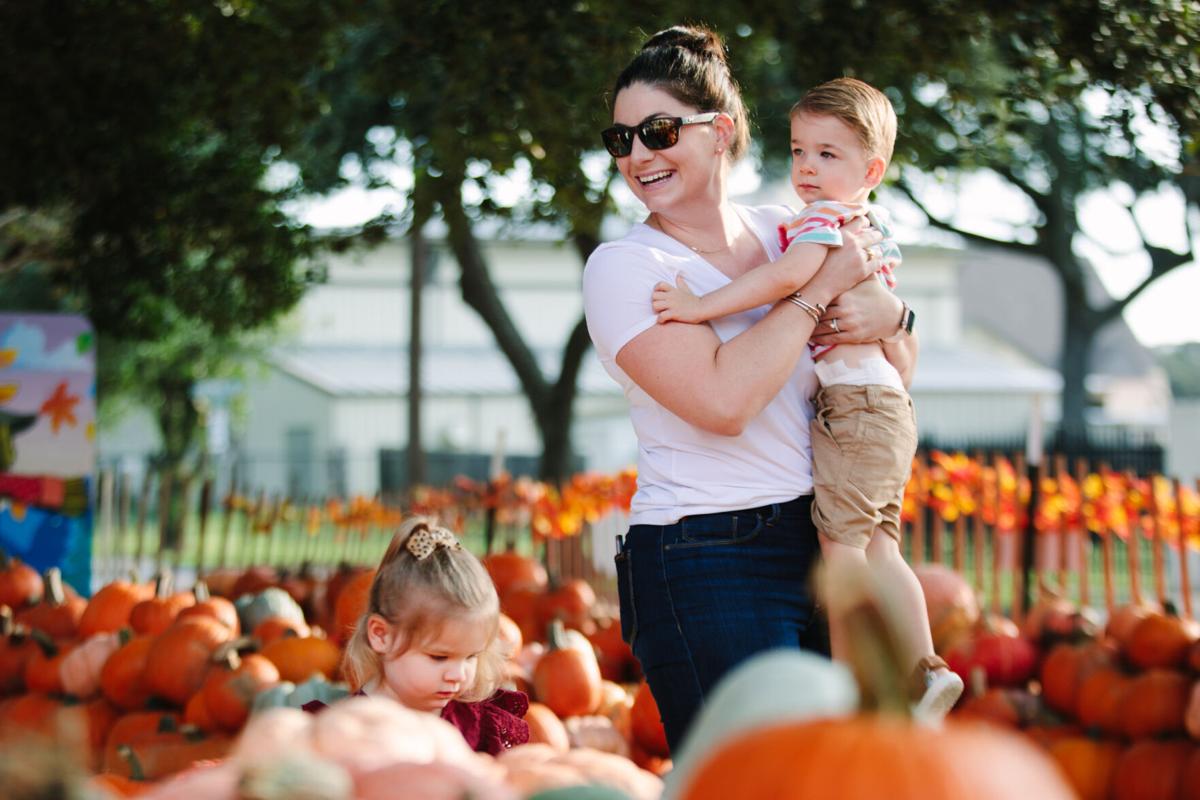 Lesley Edgerton walks around the pumpkin patch with her twin children Wells, right, and Henley. 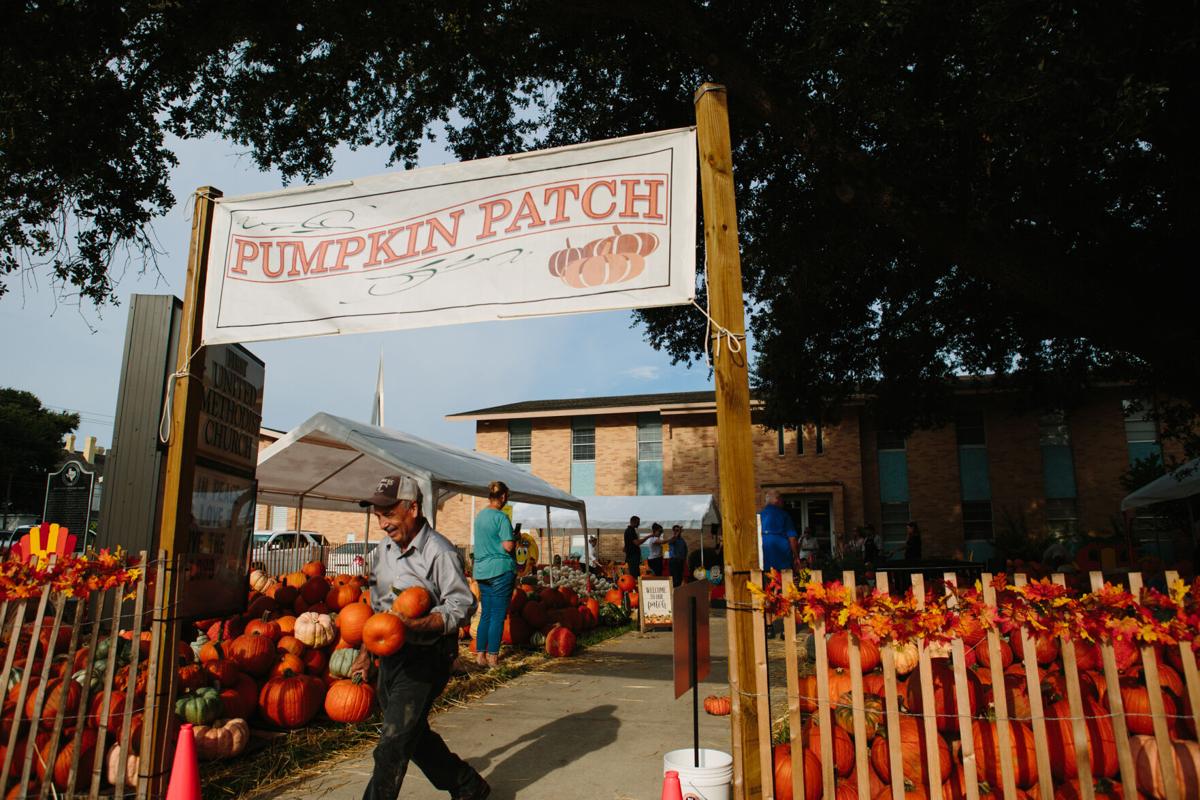 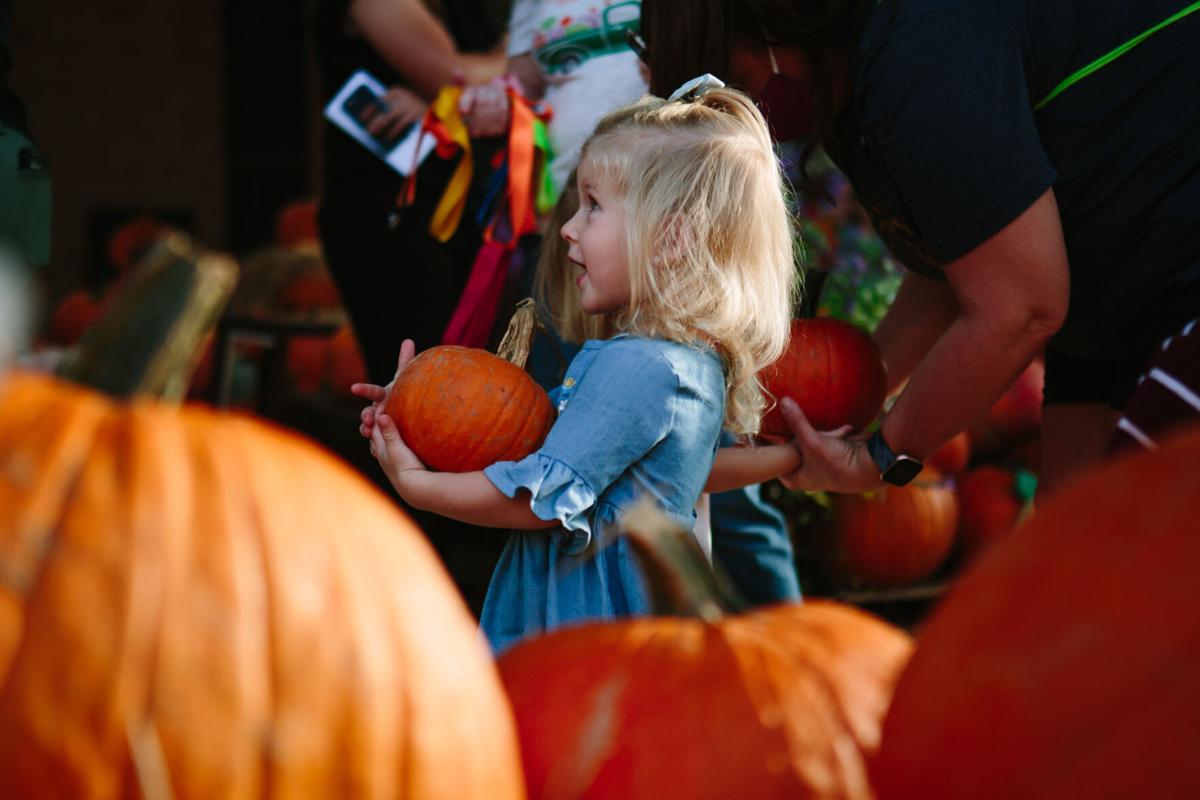 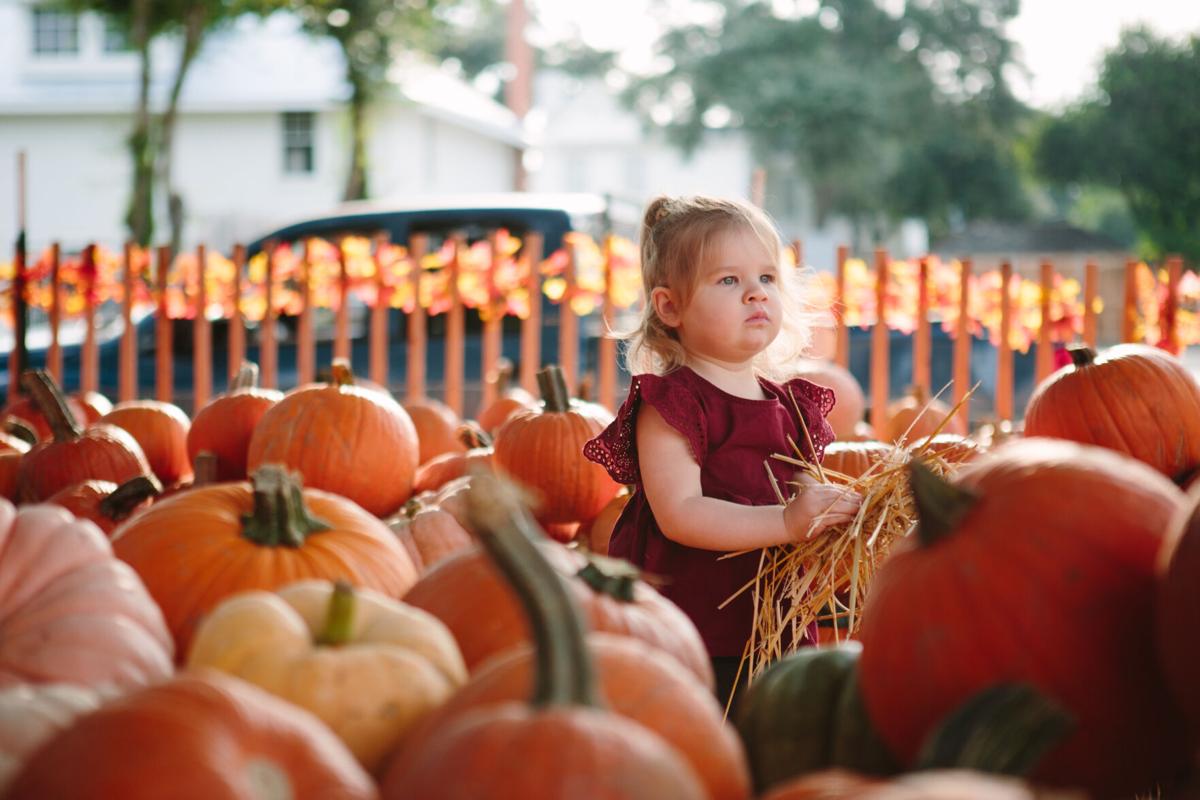 Grady Bundick, 2, hands his dad Jim a pumpkin while visiting the pumpkin patch at First United Methodist Church in Victoria on Monday.

Carol Madden takes a photo of her 9-month-old grandson Connor Couch at the pumpkin patch.

Lesley Edgerton walks around the pumpkin patch with her twin children Wells, right, and Henley.

In a few hours, the rising sun would burn off the cool and return the 90 degree weather, but as the kids wandered into the pumpkin wonderland, it felt like fall.

Each of the Day School’s classes go on an annual pilgrimage to the First United Methodist Church pumpkin patch. Parents, guardians and family members are invited to come along each year, and each year a majority do.

Rounding the gate, a few kids squealed with excitement. Several ran off to lay their hands on the first pumpkin they could get to.

Nicolas Sahualla was on a mission, though. He walked toward the “corn table” — a handmade table with raised sides full of dry corn kernels, a yearly favorite with all of the 2-year-olds, said their class teacher Connie Moose.

“He’s only two,” said Nicolas’ mother Jaqueline Alvarez, 40. “When COVID hit, we were at home for the first year, and he didn’t socialize. So this has been great for him.”

While he occasionally has trouble sharing, Alvarez said, as Nicolas trundled off with all the toy backhoes he could fit in his tiny hands, being around other kids in this environment has been a great way for him to learn how to interact with others.

Alvarez was a nurse in the Edinburg area before moving to Victoria two years ago. When they got here, just before the pandemic, Alvarez quit nursing to stay home and be with Nicolas. She said, when the pandemic began, however, it was difficult to stay away from the hospitals.

“I felt guilty at the beginning, you know, kind of, I want to go back and do my part,” she said. “But who takes care of your kids? I was here (in Victoria). I didn’t know anybody.”

As she stays home, Alvarez is continuing to take nursing classes and preparing to eventually return to the field.

While the children enjoy the games and their parents take advantage of the photo opportunities, others stop by the patch merely for the purpose of purchasing pumpkins.

Joe Mumme, 73, is from Houston. However, he has a client in Victoria who’s property he helps to take care of and decorates during the fall holiday season.

“We used to bring pumpkins down from Houston, then I found out this was going on, so I’d rather buy them locally,” he said. With the help of two others, he filled the back of his truck with more than a dozen pumpkins, varying wildly in sizes.

“We probably see anywhere from 200 to 300 (customers) a day,” said Joan Mathieu, a member of the pumpkin patch team, which oversees coordinating the patch each year. “If we keep up at this pace, we are probably going to exceed $30,000 by the end.”

The money that is raised by the pumpkin patch goes to fund several mostly youth-oriented endeavors by and partnerships with the church, including youth mission trips, children’s summer camps and Boy Scout Troop 363, she said.

But the pumpkin patch is not just a way of raising money, it’s also meant to be an enjoyable experience for the community.

“We do have a lot of picture takers. And we encourage that. If they don’t want to buy, that’s quite alright,” said Mathieu.

On weekdays and Saturdays the pumpkin patch is open from 9 a.m. to 7 p.m. On Sundays, the patch opens at noon and stays open until 7 p.m. Admission is always free.