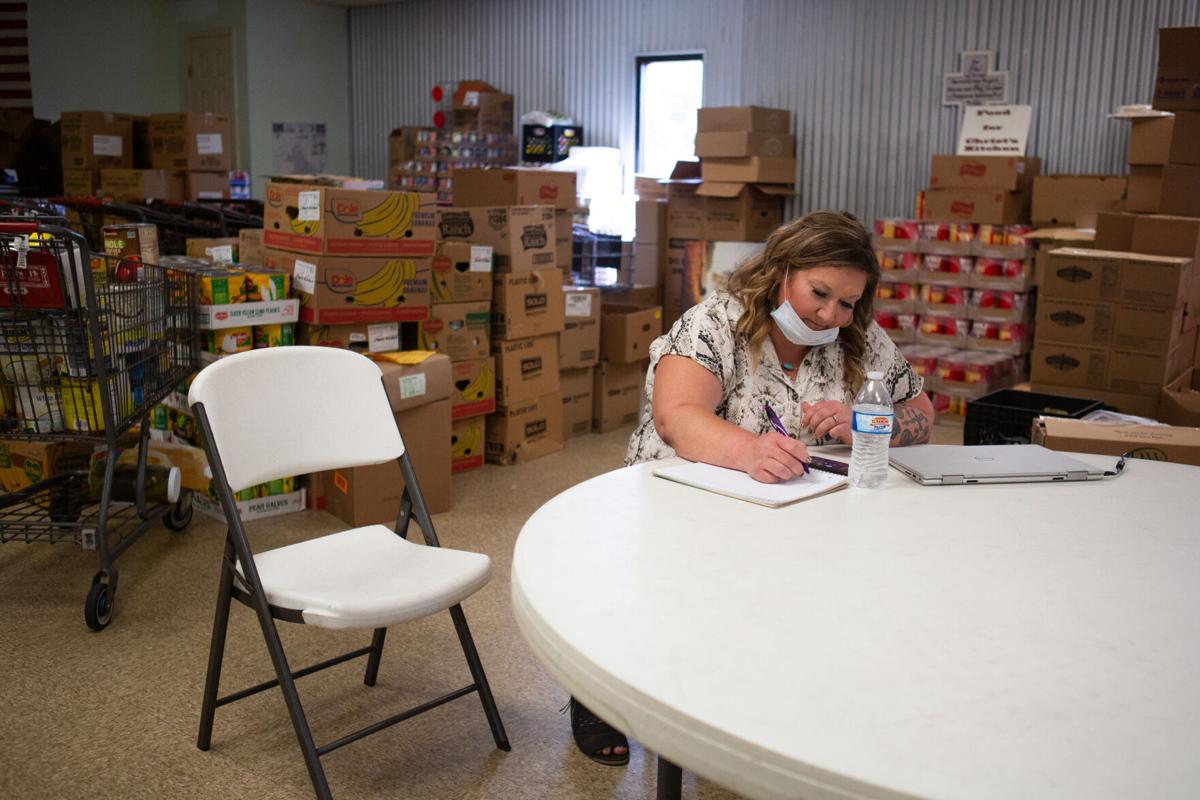 Anna Harris takes some notes while on the phone to ask about a court date for one of her clients at Christ’s Kitchen. 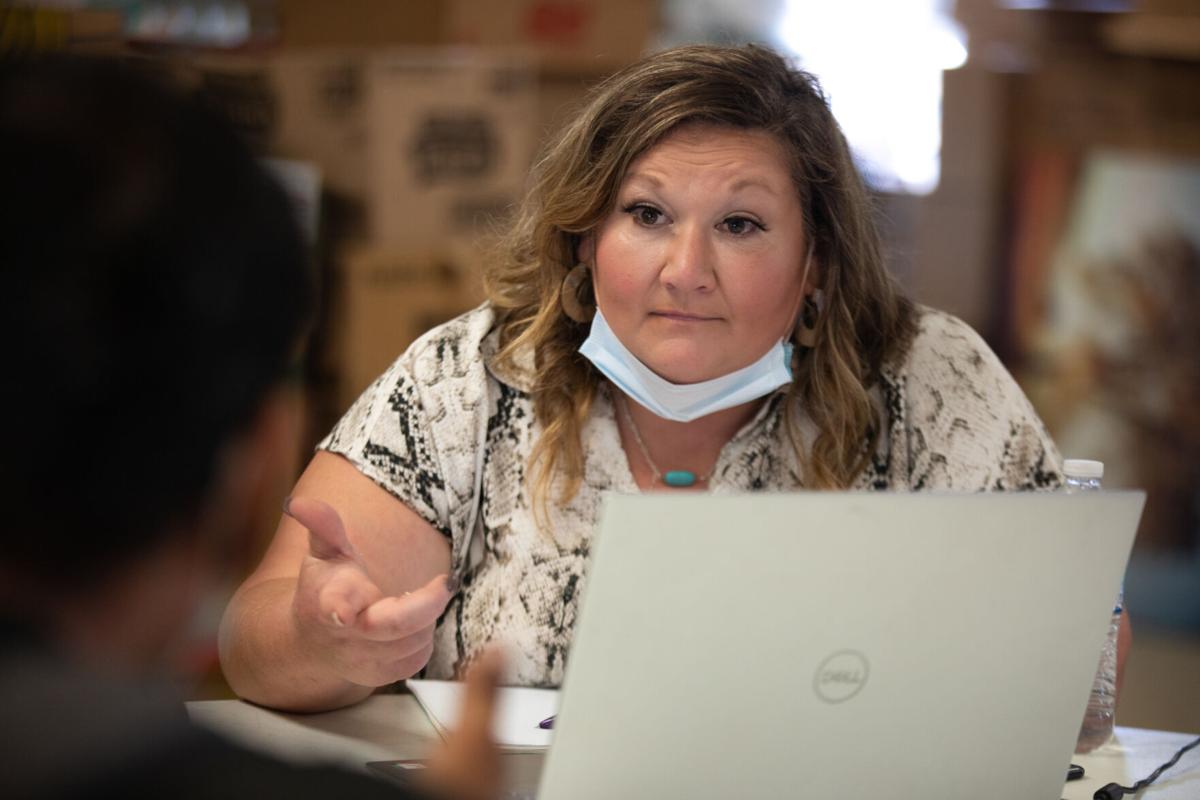 Anna Harris talks with a client at Christ’s Kitchen. Harris doesn’t make appointments with her clients, but often works with them on Wednesdays at the soup kitchen. 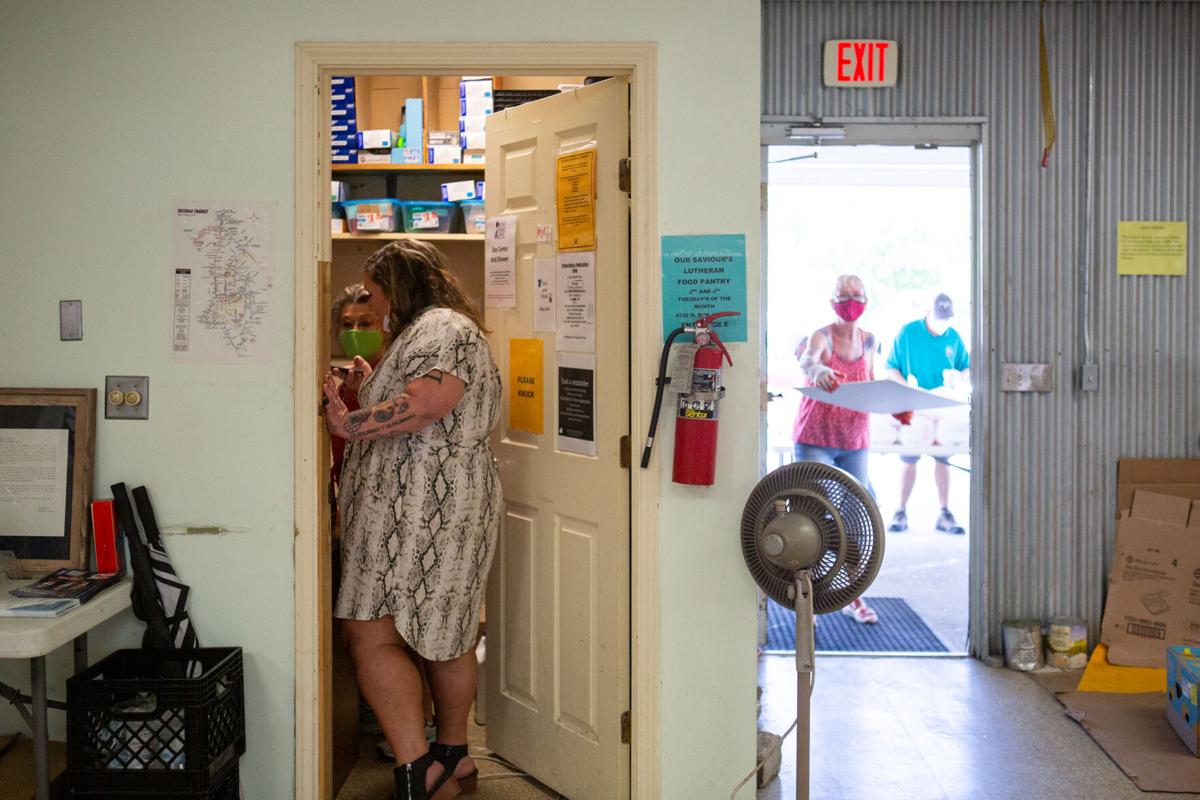 Anna Harris talks with some volunteers a the office she uses at Christ’s Kitchen. 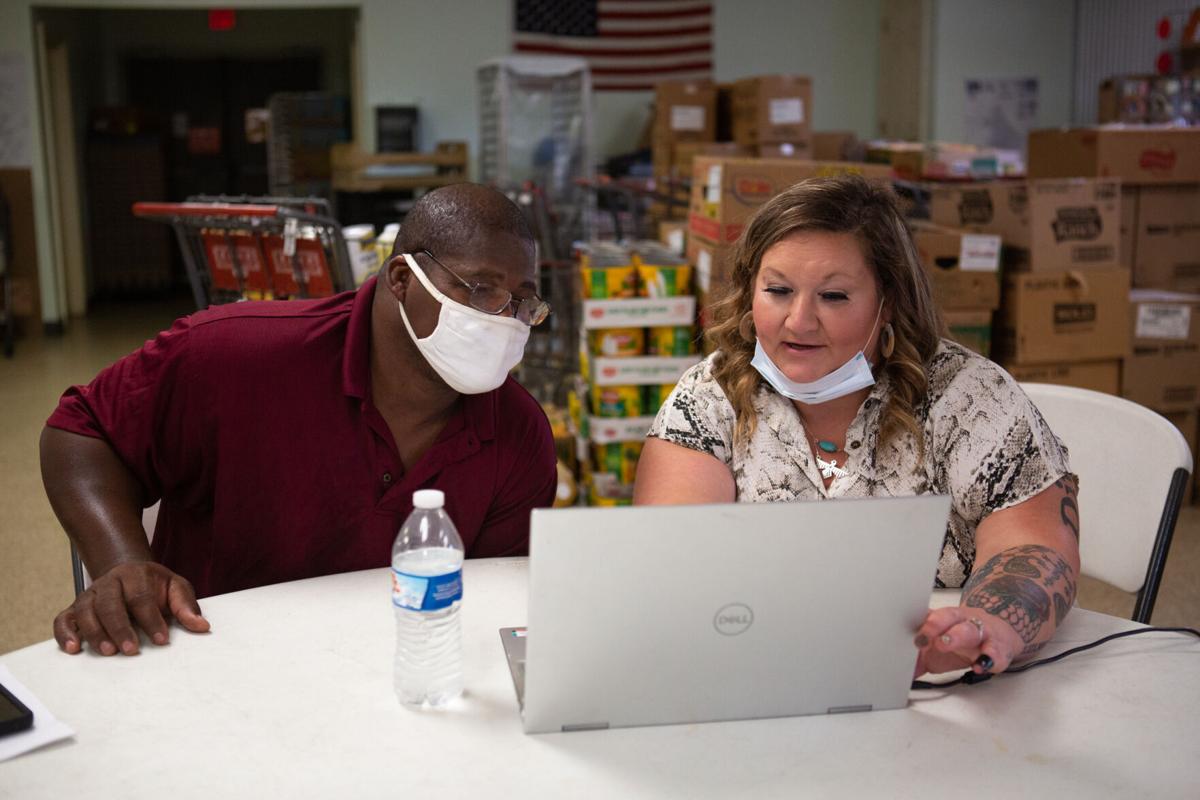 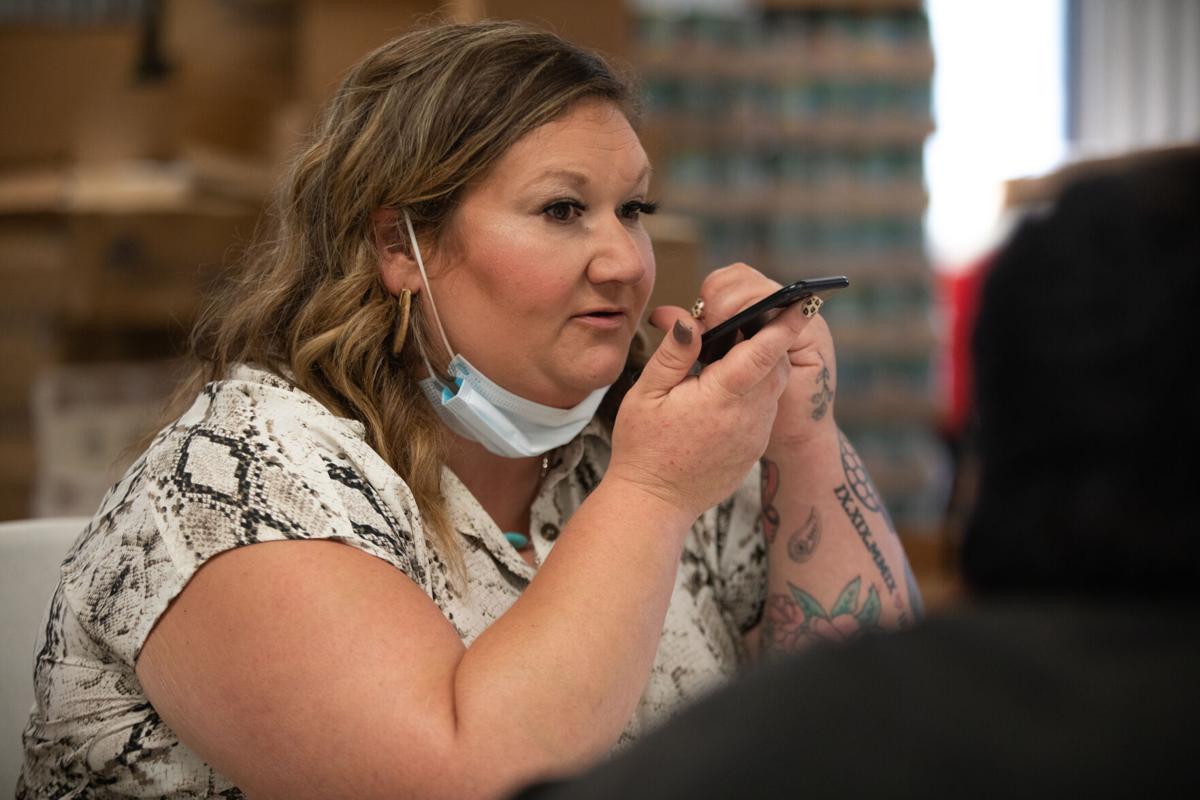 Anna Harris talks on the phone to ask about a court date for one of her clients at Christ's Kitchen.

Anna Harris takes some notes while on the phone to ask about a court date for one of her clients at Christ’s Kitchen.

Anna Harris talks with a client at Christ’s Kitchen. Harris doesn’t make appointments with her clients, but often works with them on Wednesdays at the soup kitchen.

Anna Harris talks with some volunteers a the office she uses at Christ’s Kitchen.

Anna Harris talks on the phone to ask about a court date for one of her clients at Christ's Kitchen.

Anna Harris admits she takes an unorthodox approach to criminal justice advocacy. She said that is what it takes to get results.

That approach was apparent during a recent Wednesday morning at Christ’s Kitchen, where she often meets with her clients as the bustling soup kitchen roars around them.

During the informal sessions — which are filled with laughter, crude jokes and expletives — she reminds them of their upcoming court dates, explains legal concepts and sometimes makes phone calls for defendants who don’t have a reliable means to contact court clerks. She makes jokes about her own criminal record, which she says gives her a unique perspective on the criminal justice system.

“It’s tough love sometimes. I don’t play around,” said Harris while she was placing a phone call for a client that morning. Because her client was charged with a Class C misdemeanor, he was not entitled to a court-appointed attorney. “I know what it feels like to not know what is going on with your case.”

Harris, 39, has worked with dozens of indigent criminal defendants in the Crossroads, helping them navigate the criminal justice system, comforting their families and being a “watchdog” over their court proceedings, she said. She also informs defendants of diversion programs for drug addiction or mental health and the availability of expert witnesses for their proceedings.

Some local attorneys have accepted her services, but most have not, she said.

However, some Crossroads legal professionals, including Victoria County’s district attorney, local lawyers and a district judge, have said Harris’ work could be hurting defendants’ cases. In August, a murder trial was postponed after it was determined Harris had been speaking with the defendant without the court’s knowledge.

Harris said she came to Victoria County after inmates from the jail reached out to her organization, JUST-US Participatory Defense, which advocates for criminal defendants in rural counties, and the Texas Jail Project, another nonprofit that focuses on improving jail standards that she’s worked with for nearly two years.

Harris is focused on pushing court-appointed attorneys to do more for their indigent defendants, she said. Because the attorneys are from private practices because Victoria County does not have a public defender’s office, Harris worries they are not following every avenue available for their clients. The county considered opening a public defender’s office in 2019, but ultimately turned it down.

“Not all court-appointed attorneys are equal. Anna is like a cattle prod for them,” said Krish Gundu, the executive director of the Texas Jail Project, a nonprofit that advocates for the rights of criminal defendants held in county jails. “Some attorneys need to be nudged.”

“The system works for some counties,” said Burkhart, speaking broadly of indigent defense and not specifically of Victoria County. “However, some court-appointed attorneys are great while some, unfortunately, are not so great.”

At least one attorney, Charles Nesmith Jr. who works in Victoria County has worked with Harris as a paralegal, but others are unaware that she is in contact with their clients.

That was the case for Neal Connors, a Beeville attorney representing Christopher Isador Varela Jr., who is charged with murder. In August, when that case was set to go to trial, Victoria County District Attorney Constance Filley Johnson and Connors agreed to postpone the proceedings after discovering Harris had been in contact with Varela without their knowledge, according to court documents.

“If someone is injecting themselves into the representation of Mr. Varela, someone who is not a licensed attorney,” District Judge Garza said in court documents. “And if the defendant relies on other advice than what his attorney gives him, his rights could be prejudiced.”

Those concerns by both the defense and the state led to the case being postponed until November.

Harris said she is careful not to provide legal advice, acknowledging that would be wrong. Although she is reminding defendants of their court dates and explaining legal concepts to them, she refuses to hear anything about the specifics of their cases, as those conversations are not subject to attorney-client privilege, meaning they could be used against them in court.

“I shut it right down when they try to talk about their case. I am not a lawyer, and the last thing I want is for them to turn state’s evidence,” she said during the Wednesday morning at Christ’s Kitchen. “I try to make that as clear as day — I am here to help, but I am not your attorney.”

In the days following a trial that saw Harris called to the stand and admonished by the judge, Garza signed a now-rescinded trespass warning barring her from some county facilities after she made a TikTok video in one of the courthouse conference rooms. That trespass warning led to Harris filing a First Amendment lawsuit against the sheriff and district attorney.

“You are talking to people that are having the worst days of their lives ... You have to find a way to cope with that. My videos help me cope,” she said of the video, which shows her dancing on a judge’s bench to a Destiny’s Child song.

After filing the lawsuit, Harris was arrested by deputies on suspicion of littering and failing to signal a lane change, according to jail records. Those charges were dropped the next day, according to an attorney representing the county in the federal lawsuit, which Harris said she has no intention of dropping.

“These people need someone in their corner,” she said. “I don’t mind being that person.”

The officials named in the lawsuit declined to comment on the situation because of pending litigation.

After a more than 10-year career working for the Texas Department of Family and Protective Services in various roles, Anna Harris started her nonprofit, JUST-US, after a close friend was charged with intoxicated manslaughter in Bastrop County.

Harris, who holds a master's degree in criminal justice and is a licensed paralegal, said she felt her friend's court-appointed attorney was not doing enough in the case, so she started looking at options to help. Soon after, other inmates from the jail started contacting her for help, as well.

"It was at that point I realized my passion," she said.

She said she is effective in her job because defendants easily relate to her, in part because of her own run-ins with the law, which, most recently, includes pleading guilty to felony theft of livestock in Hays County in 2017. She said her experience with the criminal justice system — as an outsider and a defendant — give her a unique perspective.

"I even have my mugshot framed. I own it, and I think that makes all the difference when working through this with people," she said.

A Victoria murder trial set to begin Monday was postponed, leading a criminal-justice activist who was barred from the Victoria County courtho…

She hurt the defendant in at least one recent trial, distracting the jury by staring at them and passing notes across the bar to the defense attorney in the middle of testimony. If she’s trying to help, she should sit with the defense and not make Google eyes at the jury.