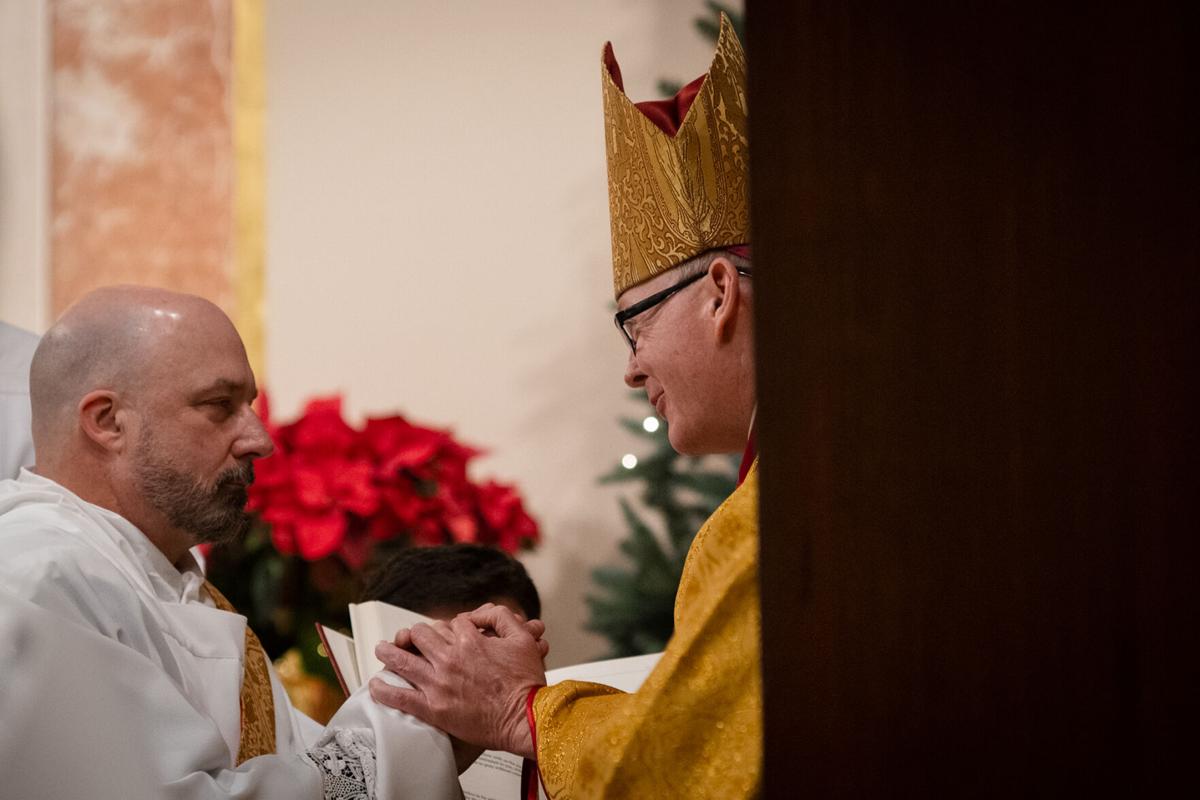 The Rev. Richard Barfield kneels before the Most Rev. Brendan J. Cahill during the Rite of Ordination Mass on the morning of Jan. 8 at the Cathedral of Our Lady of Victory. 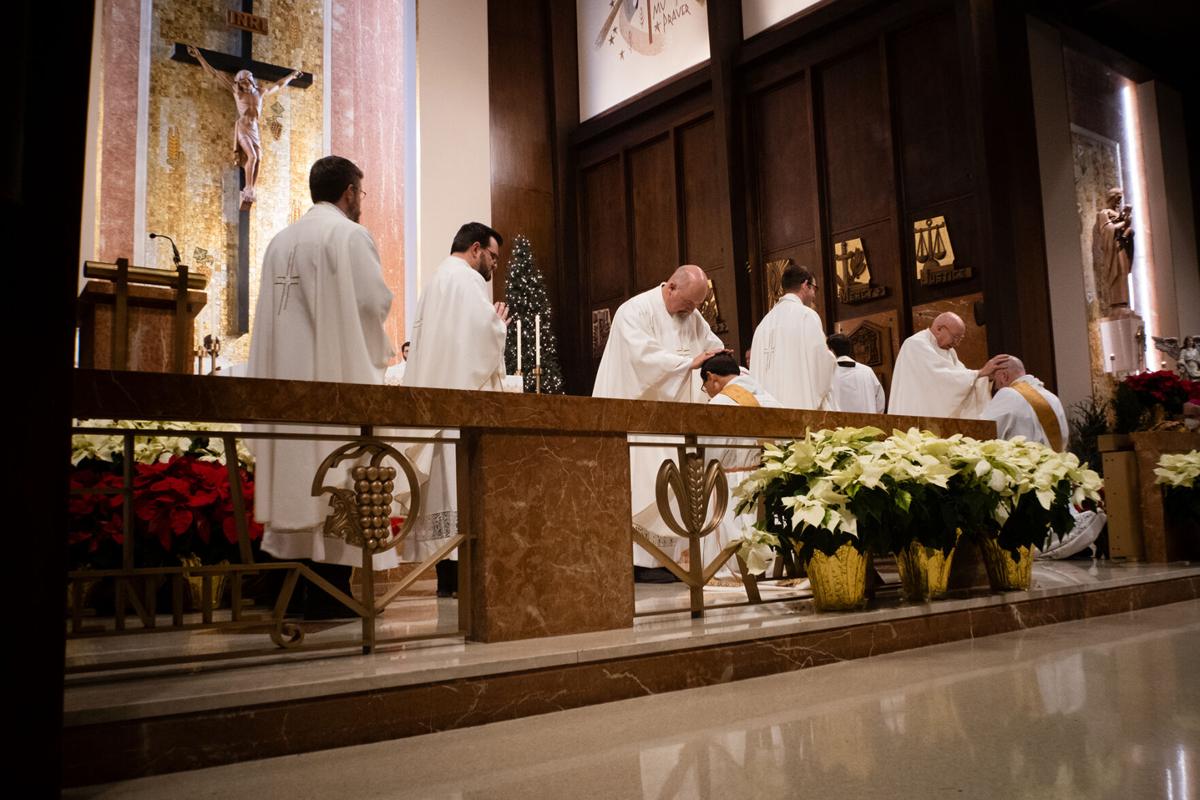 The assembled priests lay their hands on the heads of Revs. Tran Dinh, center, and Richard Barfield, right, during the Rite of Ordination on the morning of Jan. 8 at the Cathedral of Our Lady of Victory. 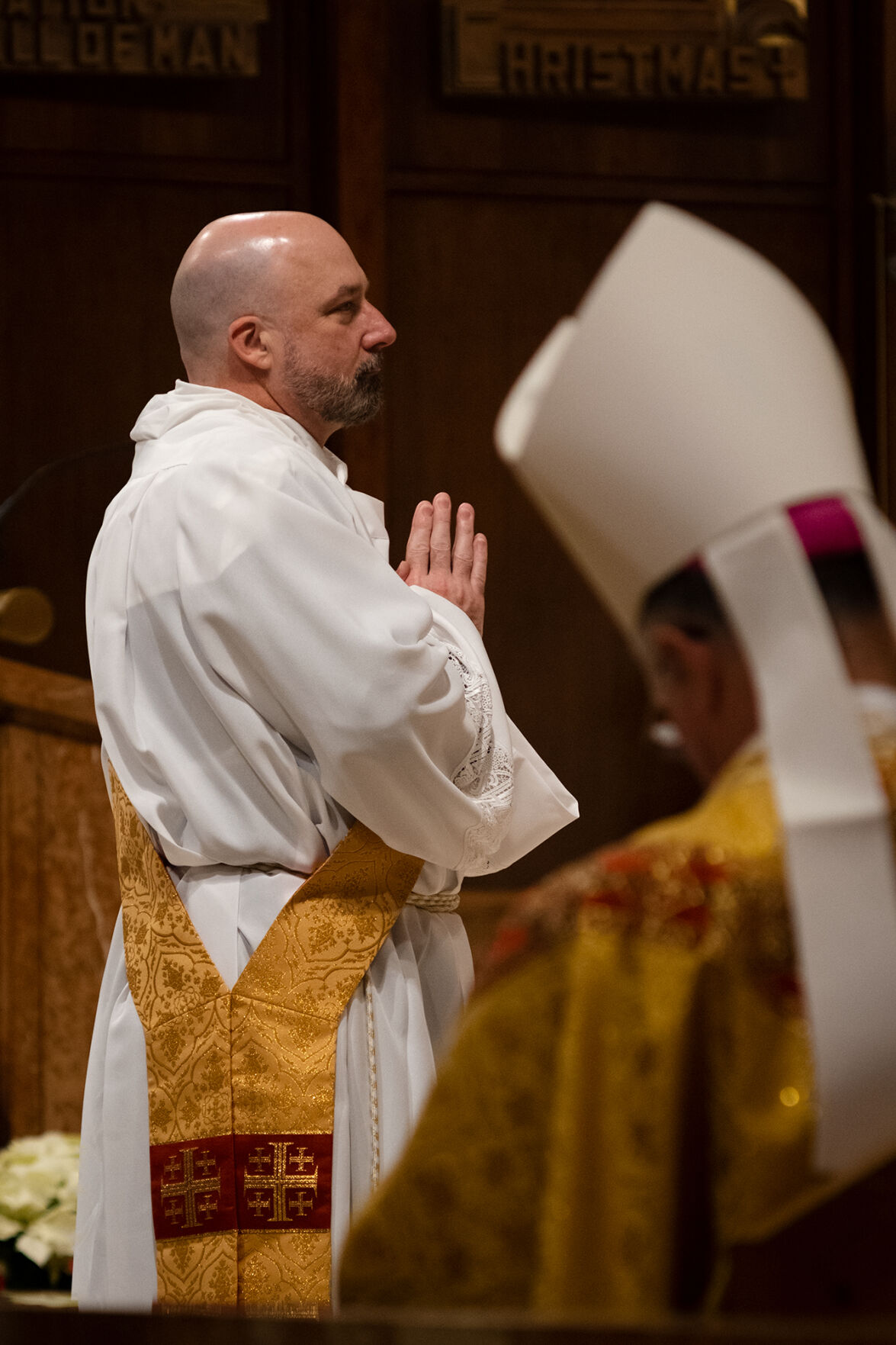 The Rev. Richard Barfield prepares to kneel before the bishop during the Rite of Ordination mass on the morning of Jan. 8 at the Cathedral of Our Lady of Victory in Victoria. 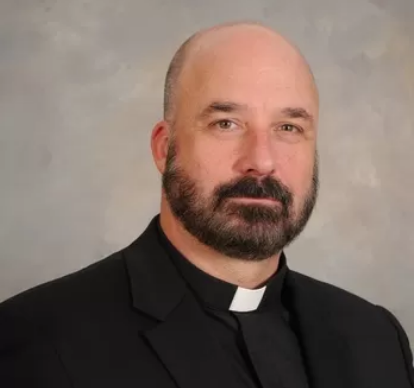 The Rev. Richard Barfield kneels before the Most Rev. Brendan J. Cahill during the Rite of Ordination Mass on the morning of Jan. 8 at the Cathedral of Our Lady of Victory.

The assembled priests lay their hands on the heads of Revs. Tran Dinh, center, and Richard Barfield, right, during the Rite of Ordination on the morning of Jan. 8 at the Cathedral of Our Lady of Victory.

The Rev. Richard Barfield prepares to kneel before the bishop during the Rite of Ordination mass on the morning of Jan. 8 at the Cathedral of Our Lady of Victory in Victoria.

There’s probably only a hundred or so married Catholic priests in the U.S., and now the Crossroads is home to one of them.

On Jan. 8, the now Rev. Richard Barfield completed an important milestone in a years-long spiritual journey that had led him from his Protestant roots to serving as a priest for the Diocese of Victoria. Barfield, who began the process to become a priest when he was already married, said his ordination ceremony felt like a homecoming.

In a two-hour ceremony, Barfield was ordained that day along with the Rev. Tran Dinh, who will serve at St. Mary’s Catholic Church in Victoria. Barfield will serve as many as 1,000 families in Calhoun County by praying daily, celebrating Mass and organizing other spiritual activities.

With a little more than 400,000 priests serving throughout the world, married priests like Barfield are “very unique,” said Victoria Diocese Bishop Brendan Cahill.

Born in Van Vleck and raised Baptist, Barfield’s journey to the priesthood was not a simple one. That journey began when Barfield was serving as an Army chaplain attached to the 82nd Airborne in Haiti after the devastating 2010 earthquakes. It was about then when he began to feel like the Army was more concerned with soldiers’ service to the military rather than to God.

“The boat was in the water in Haiti, and the sails were set in seminary, but in Afghanistan, that’s where it really launched,” he said.

When Barfield was shipped out to Kandahar Airfield in Afghanistan to serve with the 7th Special Forces Group, he found himself working closely with four Catholic priests. Barfield admits he had reservations about Catholicism then, but he already had begun to realize many of those reservations were actually misconceptions.

“It’s not the devil, and it’s not a heretical institution,” he said has since learned.

As those misconceptions were dispelled, he was simultaneously drawn to Catholicism after learning about the early history of the Bible. It was Catholics, he said, who were responsible for compiling the original texts, something that he had missed in his earlier religious education.

After a lot of questions and personal study, Barfield eventually began to think about joining the Catholic Church. A conversation with an archbishop got Barfield thinking about the Victoria Diocese after the archbishop mentioned he knew Cahill and that the bishop “would be open to (him).”

Cahill was there to help Barfield constantly throughout the long and difficult process required to becoming a priest, Barfield said.

First, Barfield completed a discernment process that required him to examine his reasons for joining the church and make peace with his former Protestant church.

After sending a special letter to the Vatican, Cahill was instructed that Barfield could become a priest despite his marriage. But he would first be required to be simply a Catholic for at least three years.

And although Catholic priests are normally required to take vow of celibacy, they would allow Barfield an exception as long as he did not remarry.

Celibacy is not just a symbol of a priest dedicating their life to God. It’s, more importantly, an active demonstration of that dedication, Cahill said.

“It’s a powerful tradition, but exceptions can be made,” Cahill said.

The process was difficult for everyone involved in more ways than one.

Cahill joked, saying he was sandwiched with navigating paperwork for two of the biggest bureaucracies in the world, the U.S. military and Catholic Church.

But it was also the novelty of the situation that initially had the bishop wondering whether it was even possible.

Barfield faced years of study, and at the age of 51, changing denominations was not an easy task to wrap his brain around.

In fact, he was told in the military there were about a half dozen other Protestants chaplains wanting to become Catholic, but they were choosing not to simply because the change was too hard, Barfield said, adding he hopes his transition will serve as an example for those service members.

Although Barfield said he has since fallen out with some of his former Protestant acquaintances, he has not witnessed any negativity from Crossroads Catholics. For that, he said he is grateful.

“It is easy to become self conscious. ‘What are people thinking about me and my wife and how does this thing work?’” he said.

But Barfield said so far he has felt the decision has been the right one for himself and his family.

Barfield said his wife also has embraced Catholicism, but she did so through her own personal journey.

On Saturday after his ordination service, Barfield celebrated his first Mass, giving the Eucharist to Crossroads parishioners, including his wife.

Like his ordination, that first Mass does not mark the end of his spiritual journey but rather a single milestone in an ongoing story that he hopes will continue to bear spiritual fruit.

“We don’t stop growing or learning, and we shouldn’t anyway,” he said. “Every day I learn more.”

To read a story about the Rev. Tran Dinh, another priest who was ordained during the ceremony shared by the Rev. Richard Barfield, check out Faith on Page A4.

Thank you and God Bless you. We need more Catholic priests and they need our prayers always for the Devil is always out to get them.