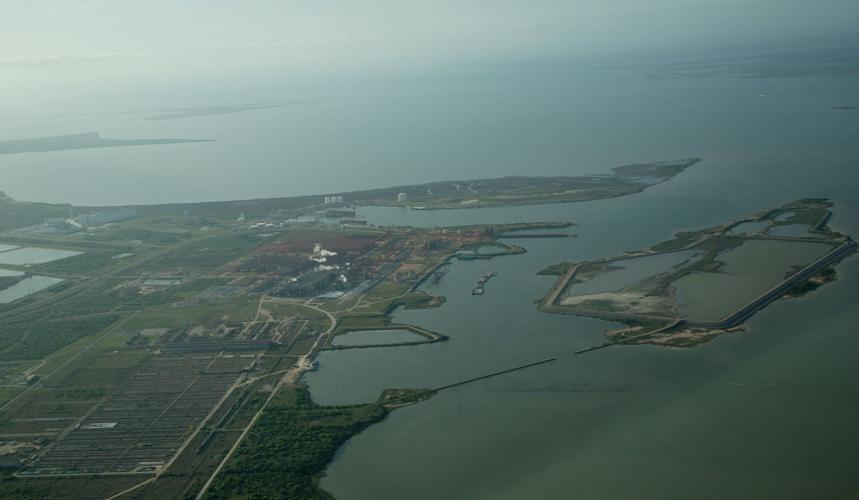 An aerial view of the Calhoun Port Authority, which is in the upper half of the photo, is shown. 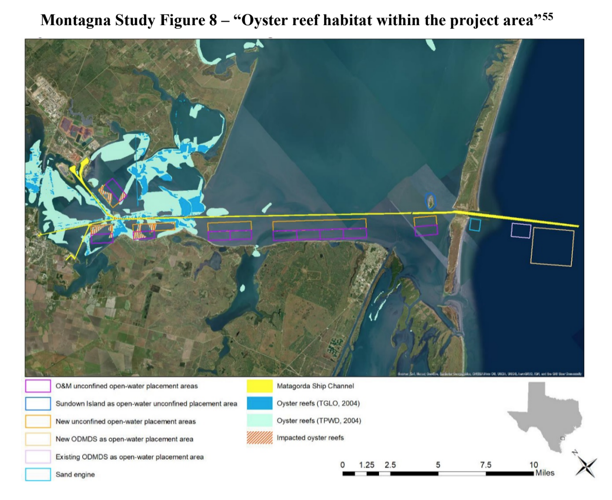 This map shows potential dredge spoil placements related to the expansion of the Matagorda Ship Channel, overlaid with oyster reef habitats in the area. Researchers with Texas A&M-Corpus Christi found that the ship channel’s expansion could destroy 800 acres of oyster reefs and 1,000 acres of seagrass habitats, far greater than a previous Army Corps of Engineers estimate.

A lawsuit filed in U.S. district court by a coalition of environmental groups urged a federal agency to reexamine its plan to reduce hazards to local wildlife that may arise during a $1 billion expansion of the Matagorda Ship Channel.

Lawyers from the nonprofit Earthjustice represent the Seadrift-based San Antonio Bay Estuarine Waterkeepers and four other organizations in a case filed May 25 against the U.S. Army Corps of Engineers, which produced recommendations to expand the channel in 2019. The planned expansion includes the addition of a 1,200-foot turning basin in Lavaca Bay to accommodate larger vessels, such as Aframax and Suezmax ships.

In its report, the Corps stated the necessary dredging activities would result in the removal of around 130 acres of oyster reefs. The Corps plans to fully replace the removed habitat.

An evaluation of the environmental impacts of the ship channel expansion published last September refuted the Corps’ original estimates. Paul Montagna and a team of researchers at Texas A&M-Corpus Christi estimated 800 acres of oyster reefs and 1,000 acres seagrass beds would be destroyed by dredging.

Erin Gaines, an attorney representing the environmental groups, said her clients believe the Corps should not attempt to move the project forward without submitting a new Supplemental Environmental Impact Statement that responds to the findings of Montagna’s team.

When reached for comment on the lawsuit, the Corps’ Galveston District deferred to the Department of Justice, which is handling the lawsuit on behalf of the federal government. A spokesperson for the DOJ declined to comment, “As this matter is pending litigation.” Gaines said the Corps has 60 days from the filing date to submit a response to the lawsuit.

Before filing the lawsuit, the environmental coalition met members of the Corps in person this March and virtually last October, Gaines said. The groups pursued legal action when they felt like their demands for additional evaluation were not going to be met.

The Calhoun Port Authority, a sponsor of the planned channel expansion, is accepting bids until Sept. 28 for an “environmental soil sampling” procedure related to the project. In a “Sampling and Analysis Plan” published in 2015, the Corps’ Galveston District stated one of the objectives of sediment sampling, a key step in the pre-dredging process, is to test for contaminants.

Montagna said he is worried the dredging of the Matagorda Ship Channel may reinvigorate mercury from the historic Alcoa Superfund site. In 1988, the Texas Department of Health closed for cleanup a 1-mile section of Lavaca Bay where fish and crabs had been exposed to mercury that had been discharged from Alcoa Corp.’s chlor-alkali plant in Point Comfort between 1966 and 1979.

The study Montagna co-authored last year cited a 2020 Lavaca Bay sampling that reported the lowest concentration of mercury in fish tissue since the Superfund cleanup began.

“Lots of time and money was spent on fixing the issues with the Superfund site,” Montagna said. “The purpose of the cleanup process was to bury the mercury and this (channel expansion) project does the opposite.”

“The services are very important to redfish, sea trout and black drums.”

Oysters can protect other species by serving as natural breakwaters during erosion. Both seagrasses and oysters have the capacity to remove harmful substances from seawater.

Montagna and his colleagues are concerned that the dredging project, which covers 21 million cubic yards, will smother and “instantly kill” oysters. The report also stated that seagrasses would suffer from the turbidity plumes created by dredging.

“Remember, these ecosystem services are benefits provided for free,” Montagna said. “The recreational values are priceless.”

If the court does not grant an injunction — an order stopping the project from progressing while the lawsuit is in litigation — Gaines said the plaintiffs would ask the Corps to put the project on hold if the legal process could be expedited.