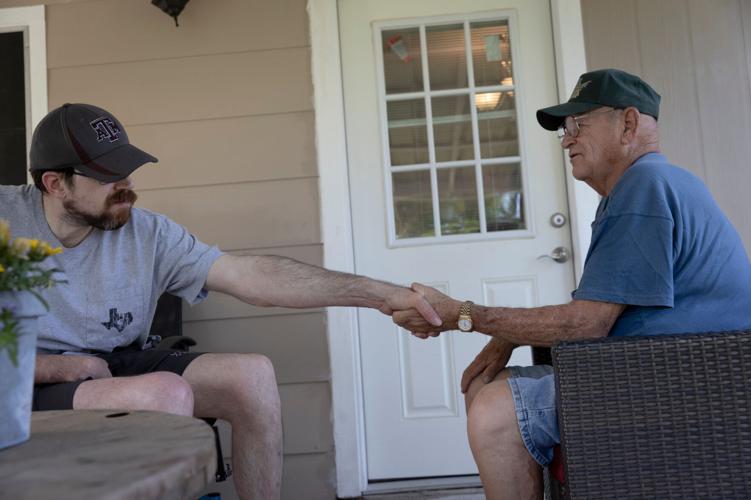 Richard Krause, left, reaches out to say goodbye to his father, L.J. Krause, on Tuesday evening in Victoria. 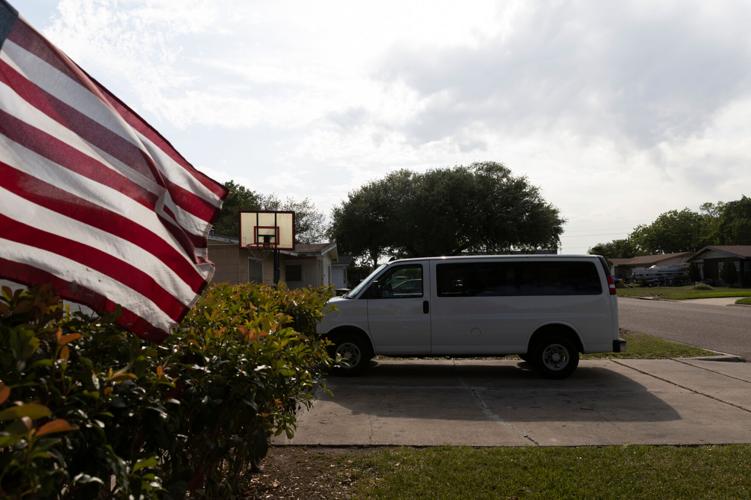 An American flag waves in front of the group house where Richard Krause lives on Tuesday evening in Victoria. 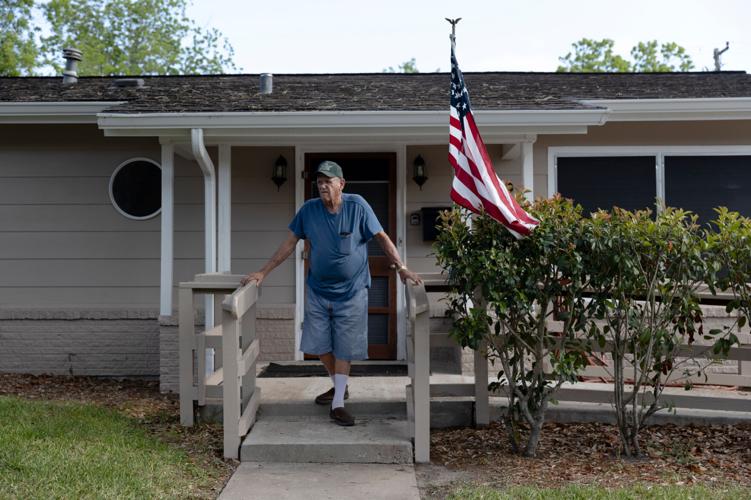 L.J. Krause stands on the front step of the group home where his son, Richard Krause, lives on Tuesday evening in Victoria. 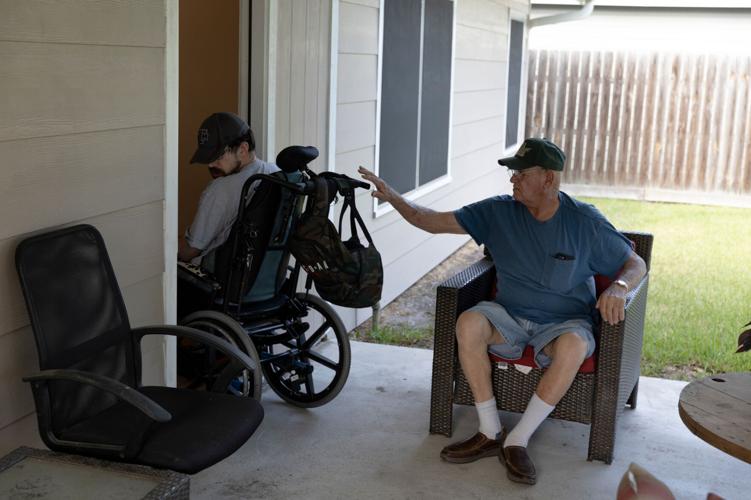 L.J. Krause, right, reaches out to assist Richard Krause, left, as he backs out of the doorway on Tuesday evening in Victoria. 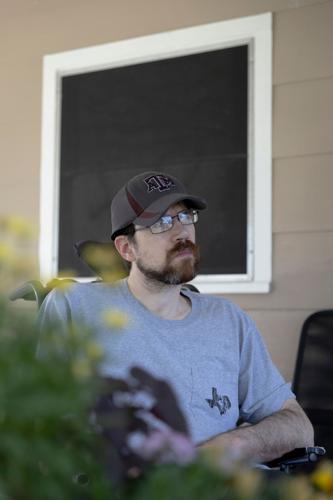 Richard Krause sits on the back porch of the group home where he lives on Tuesday evening in Victoria. 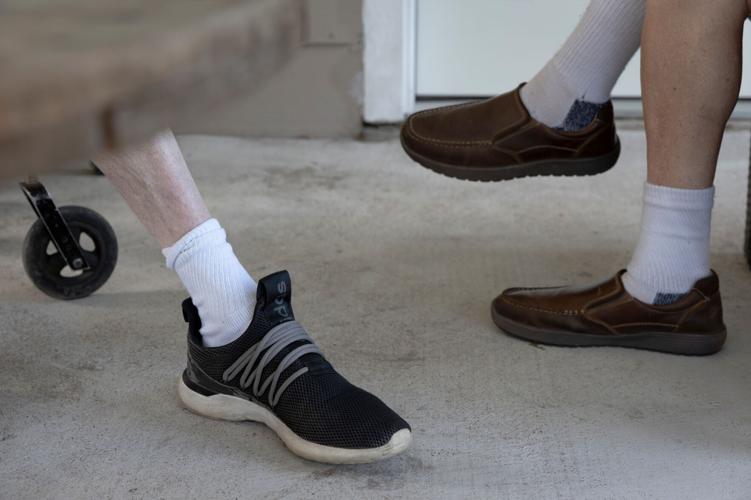 Richard Krause talks with his father, L.J. Krause, on the back porch of the group home where he lives on Tuesday evening in Victoria.

After 63 years of service in the Crossroads community, Devereux Victoria will close its Adult Residential and Community Living programs at the end of this month.

While the transition has been uncertain for many patients in the programs since the decision was made in late March, other care providers are moving into the Victoria area to fill the need and let the patients remain in the Crossroads, where they can continue to receive care from those with whom they’ve developed a relationship and stay close to family.

One such patient is Victoria resident Richard Krause, who for the past 20 years has been in care programs since an accident that caused brain damage and left him using a wheelchair, said his father, L.J. Krause.

At the time of the accident L.J. Krause described his then-college-age son as a bright student who “never had to bring a book home from school,” a gifted athlete who at 6-foot-7 played football and baseball in high school, and unfortunately, like most young adults his age had a feeling of being invincible. 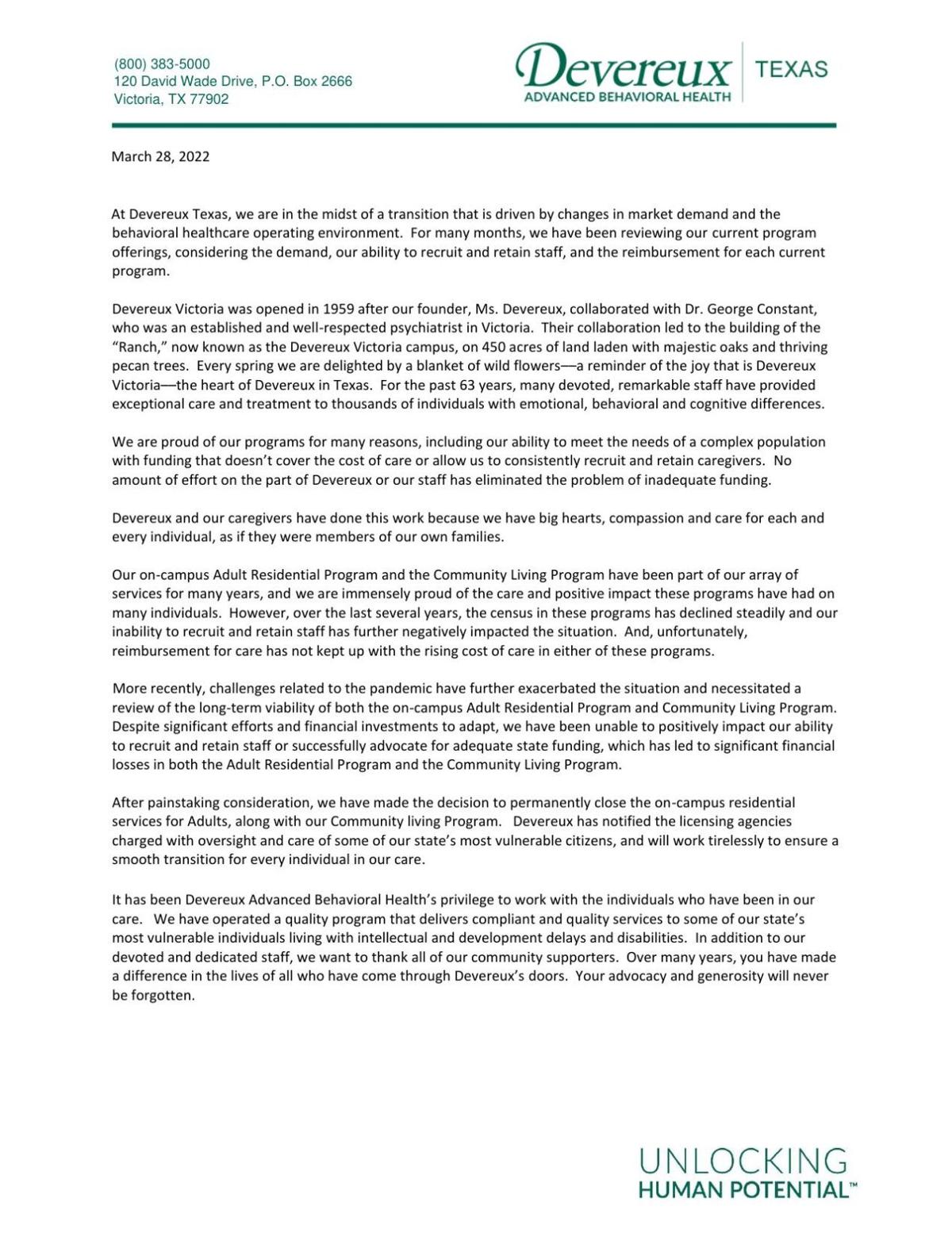 That feeling of invincibility would lead to an auto accident while he was speeding, paralyzing him and severely impacting his short-term memory, L.J. Krause said. At the time of the accident, Richard Krause was looking to go to a trade school to start a career.

His family at first tried to provide care, but between L.J. Krause managing his carpentry business and taking care of his son, it just became too much for the family, the father said.

From there, Richard Krause would bounce around a few care facilities as some struggled to stay viable and some he did not enjoy, L.J. Krause said.

At one facility in particular, in San Antonio, Richard Krause would constantly butt heads with the administrator, and management would do everything in its power to keep him there, L.J. Krause said, to keep the money flowing.

Finally, Richard Krause returned to Victoria and into the care of Devereux Victoria, a part of Devereux Advanced Behavioral Health. His father said Devereux providers have taken wonderful care of his son.

When L.J. Krause first heard the news that Devereux would close its programs, there was initial fear that his son would have to move from the family in the Victoria area. But he was pleased to learn other care providers were looking to take over the Devereux operations.

“I just want them to do as good job of taking care of him like Devereux did,” L.J. Krause said. “I can’t say enough about how well Devereux have treated him these last few years.”

Private care provider N2 Care Services Inc., of Richmond, is looking at filling the gap left by Devereux, which is a nonprofit.

Devereux Victoria has been part of the Crossroads community since 1959, when founder Helena Devereux and psychiatrist George Constant first established a campus in the area.

The population of these programs declined and, “coupled with our inability to recruit and retain staff had further impacted the situation,” Devereux said in a statement. “And, unfortunately, reimbursement of care has not kept up with the rising cost of care in either of these programs.”

It went on, “Challenges related to the pandemic have further exacerbated the situation and necessitated a review of the long-term viability of both the on-campus Adult Residential Program and Community Living Program. Despite significant efforts and financial investments to adapt, we have been unable to recruit and retain staff or successfully advocate for adequate state funding, which has led to significant financial losses in both the Adult Residential Program and the Community Living Program.”

The Victoria Advocate reached out to Devereux’s Victoria representative, Richard Perkins, for further information on the closure, and while he did say the closure will likely affect other Devereux operations, such as the Devereux Gardens nursery, details beyond the statement were not provided.

The Gulf Bend Center had over 40 intellectual and developmental disability patients in Devereux’s care through contracted service when the change was announced.

The center previously tried to run its own care facility for these patients before contracting with Devereux, but the cost was always too much to handle, said Steve Hipes, chair of the Gulf Bend Center’s board of trustees, at its April board meeting.

“Continuity of care is critical for all individuals with Intellectual and Developmental Disabilities. These individuals need continued access to medical and clinical care teams that are familiar with their case,” Mendy Blank, Gulf Bend Center IDD services director, said. “They want to remain residing in their community, where they not only feel safe and welcomed, but are also close to family, friends and caregivers whom provide a sense of comfort and stability. These supports can take years to reestablish. This can be done, but it is always best to preserve established supports whenever possible.”

N2 Care Services is in discussions with Devereux to manage the Adult Residential and Community Living programs, but Emmanuel Nnaji, N2 Care Services executive director, said Devereux has not made a final decision on what company would take over.

Nnaji said he is confident N2 Care Services can succeed where Devereux and others have struggled, having previously succeeded in similar Texas markets. "We have one is Houston and Killeen. We can make a good run of it. But nothing has been decided between us and Devereux. But we've been running our company … and been successful running it.

Another suitor for Devereux's operation is Bell Tech Ent.

As for Richard Krause, now 42, he said while there is concern about the period of change, he hopes the new management continues the quality of care he has received these last few years. He also offered the following message to those taking over his care.

“Never, ever give up, no matter what the circumstances may be. Always strive for the best and never let anyone or anything take you down the wrong path,” he said.

Editor's Note: Emmanuel Nnaji, N2 Care Services executive director, said earlier comments attributed to him via his phone were not, in fact, his comments. Comments now included in the article are accurate, he said.

As the May 31 closure of Devereux’s Victoria operations approaches, most of the more than 40 Gulf Bend Center outpatients who were in their ca…