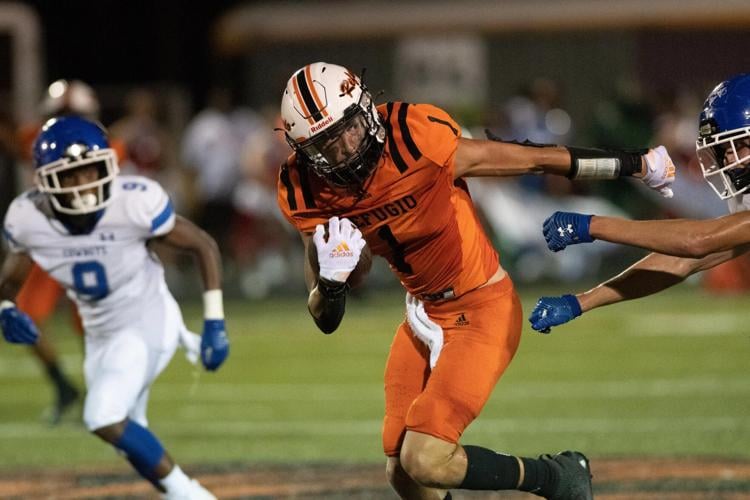 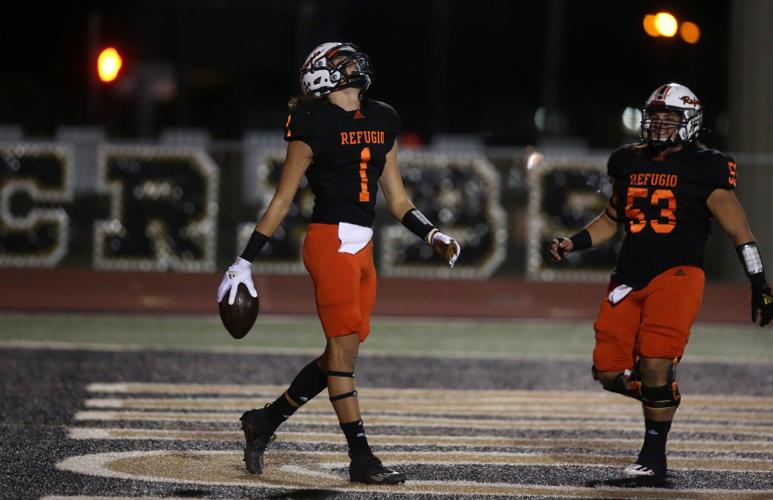 Refugio’s Jordan Kelley looks up at the sky after running the ball in for a touchdown during the Class 2A, Division I regional round playoff against Ganado at Sandcrab Stadium.

Refugio’s Jordan Kelley looks up at the sky after running the ball in for a touchdown during the Class 2A, Division I regional round playoff against Ganado at Sandcrab Stadium.

REFUGIO — Jordan Kelley was greeted by snow and single-digit temperatures during his visit to New York City.

But when Kelley returned home, he was ready to go back.

Kelley, a senior at Refugio, has committed to play football at Columbia University of the Ivy League next season.

“It was just being over there and following in love with the city,” Kelley said. “The coaches showed love to me. The visit went great and the next day I decided to commit.”

Kelley had offers from seven schools, including three from the Ivy League, and felt the chance to attend Columbia was in the best interest for his future.

“You always have to have a plan for after football,” he said. “One day football is going to end and I just felt like having that Ivy League degree and graduating from Columbia is not only going to give me a chance to play football, but after I graduate I’m going to put myself in a pretty good position.”

Kelley was a four-year starter at wide receiver and safety for the Bobcats and was a member of the 2019 Class 2A, Division I state championship team.

He’s also played four years on the varsity in basketball, track and field and baseball.

“He’s everything you’d want,” said Refugio coach Jason Herring. “He’s been on our varsity since he came out of eighth grade. He’s done everything we asked and he’s an awesome young man. He’s a great leader and a great football player and a great kid. His legacy is a great one and he’s always going to be remembered as a great high school football player and more important than that, a great high school kid.”

Kelley earned all-state honors in football and baseball, while maintaining a 4.0 grade-point average, which allowed him to draw offers from Brown, Dartmouth and Virginia, a Division I school.

“In my family, it’s always been a requirement to have good grades,” Kelley said. “My parents are really strict on the school part because you’re a student first and then an athlete. I’ve just focused since my freshman year on having good grades.”

Kelley becomes the first player in Herring’s 24 years as a head coach to play at an Ivy League school.

“I know it’s a great opportunity and it could be life changing,” Herring said. “It’s way more important than football. I’m glad football is the vehicle to give Jordan a chance to go there. I think it’s a big decision and I think it’s a big step that will open up some huge doors for him.”

Kelley is expected to play wide receiver for the Lions, who went 7-3 under Coach Al Bagnoli, the winningest-coach at the FCS level, who has won nine Ivy League championships and has been at Columbia for seven seasons.

The Lions play on campus at Robert K. Kraft Field at Lawrence A. Wien Stadium, which is located on the banks of the Hudson and Harlem rivers.

“I was going there thinking that the campus was going to be big,” Kelley said. “It’s big, but everything is so close together that everything is easy to get to. You can take the subway to anywhere you want to go.”

Kelley plans to major in business management at Columbia, and will make his commitment official Feb. 2, national signing day.

“I kind of have mixed emotions right now,” he said. “I’m kind of sad about leaving Refugio and going all the way to New York City, but I’m excited to see where this road is going to take me.”