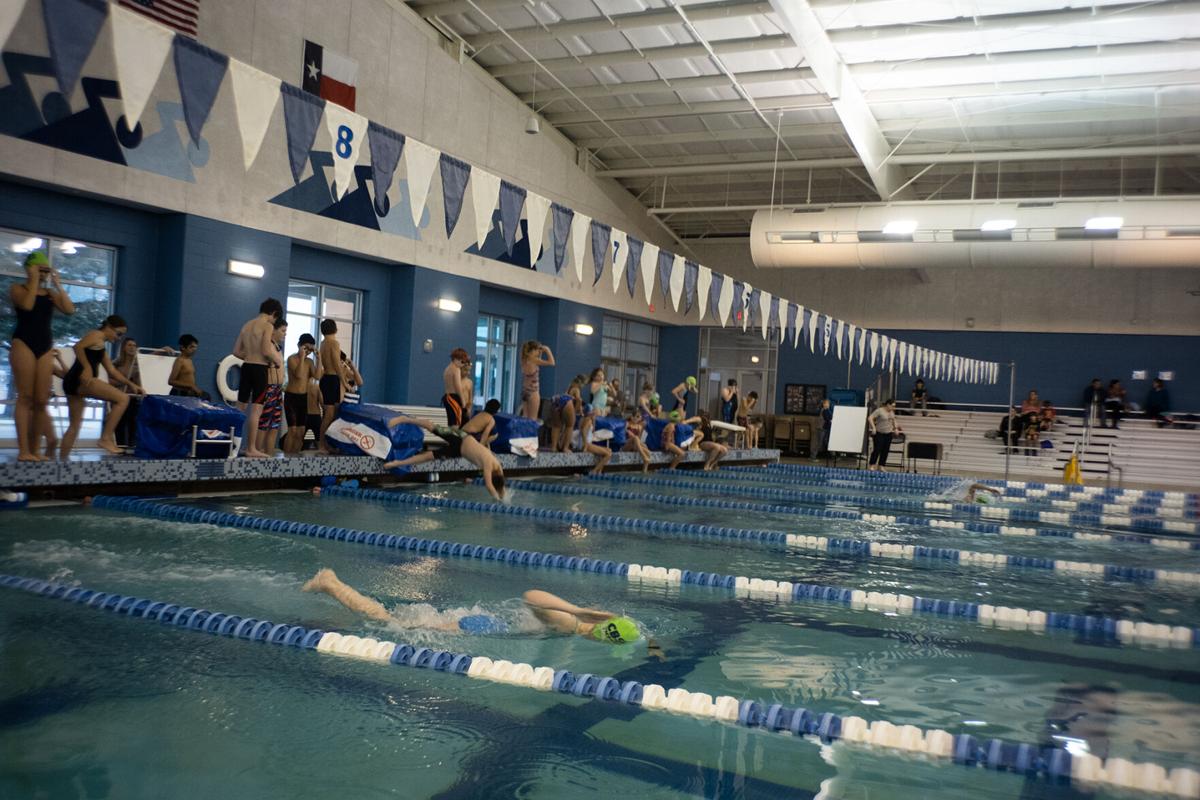 Riley Anders, 12, lower left, is among the first in the water Wednesday during a practice for the upcoming TAAF Winter Games swim meet at the Victoria Independent School District Aquatics Center. 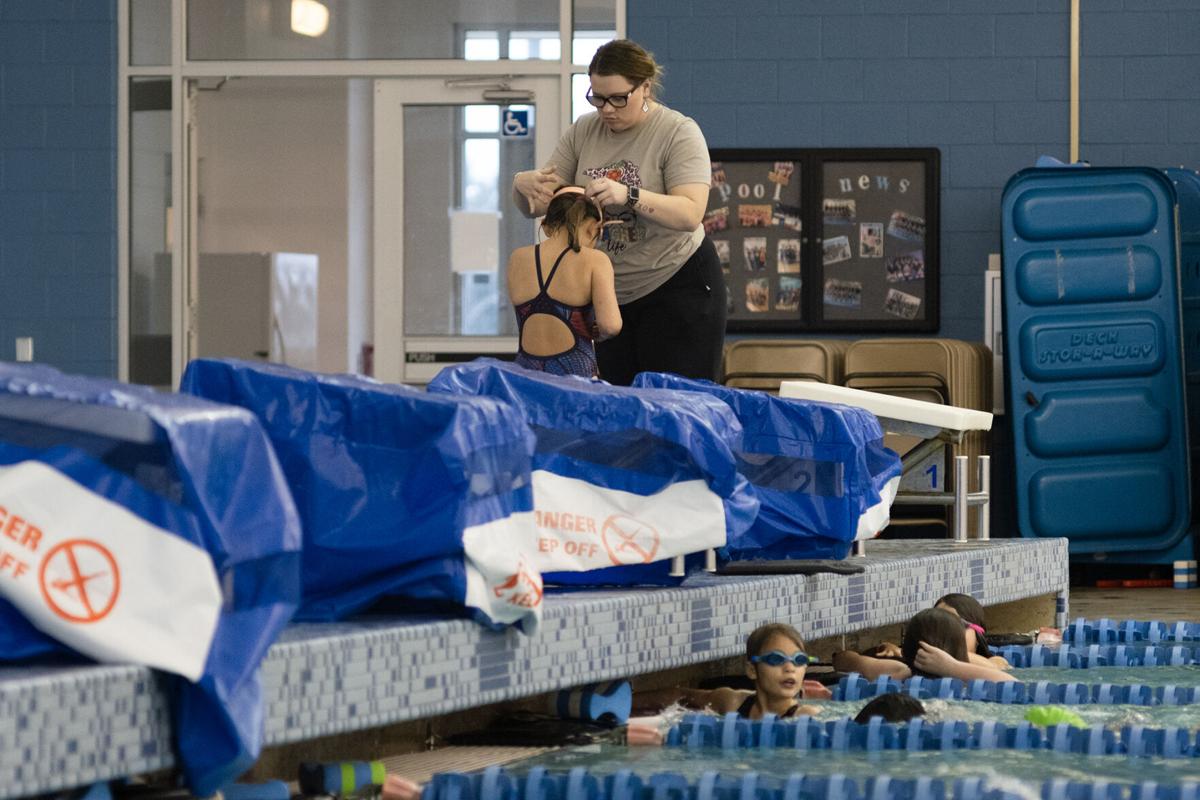 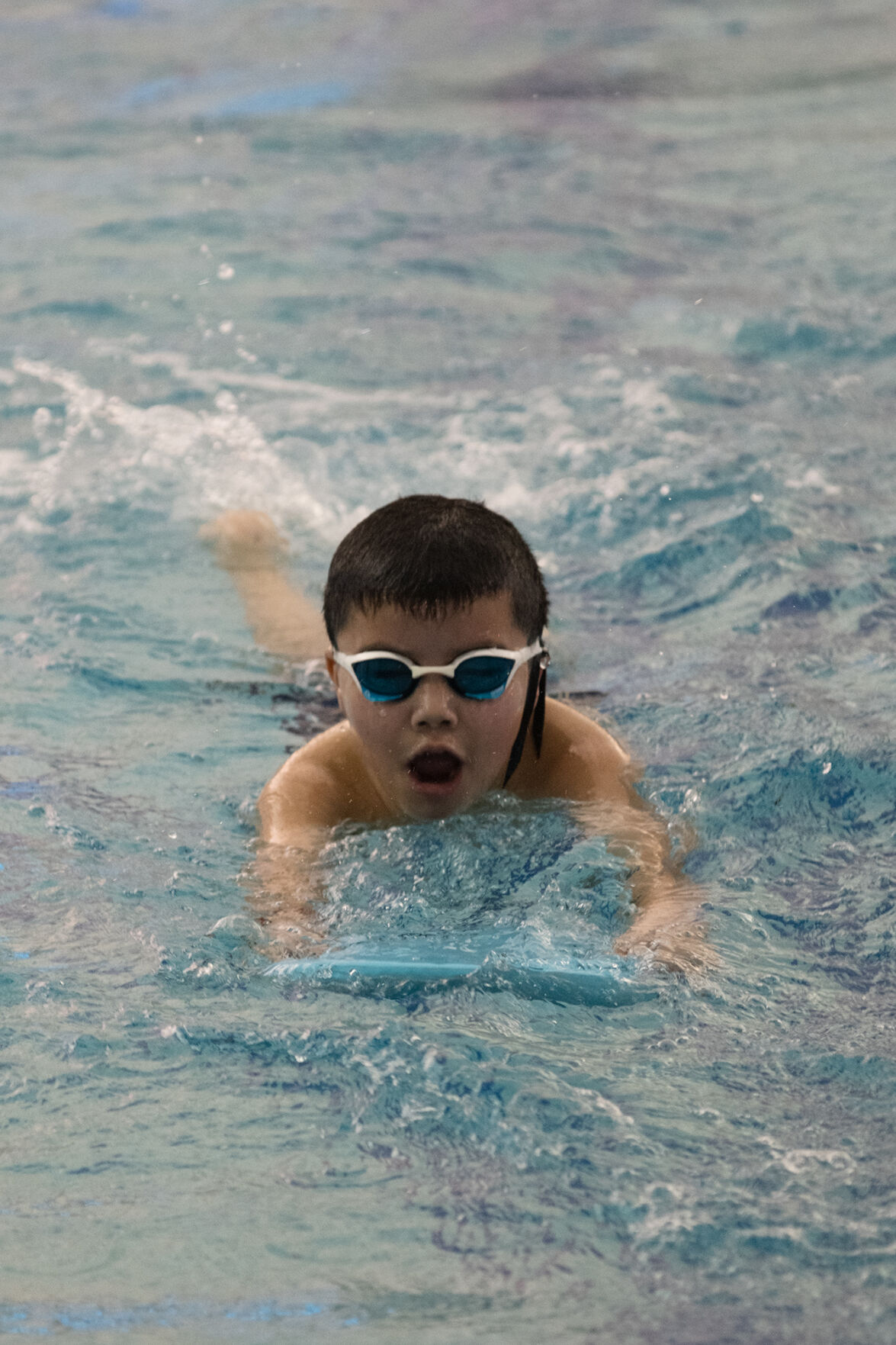 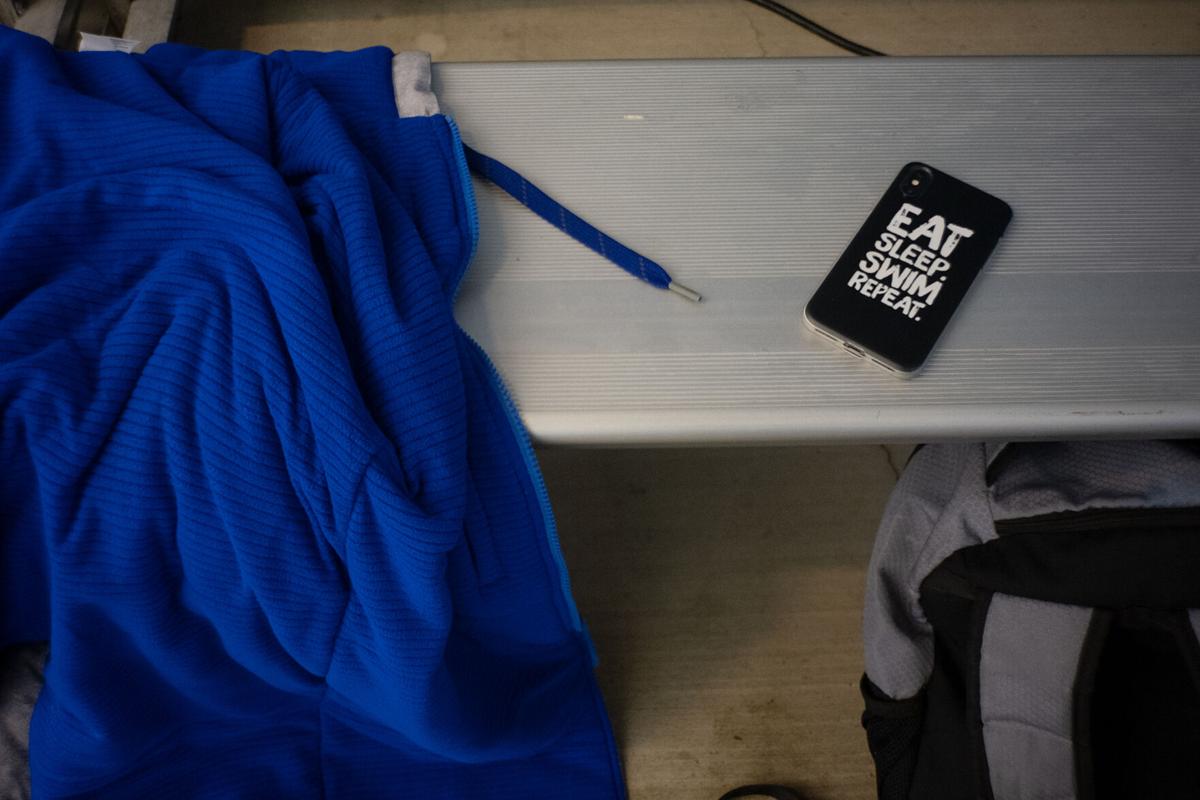 A swimmer’s cellphone sits on the bleachers Wednesday during practice for the upcoming TAAF Winter Games swim meet on Wednesday at the Victoria Independent School District Aquatics Center. 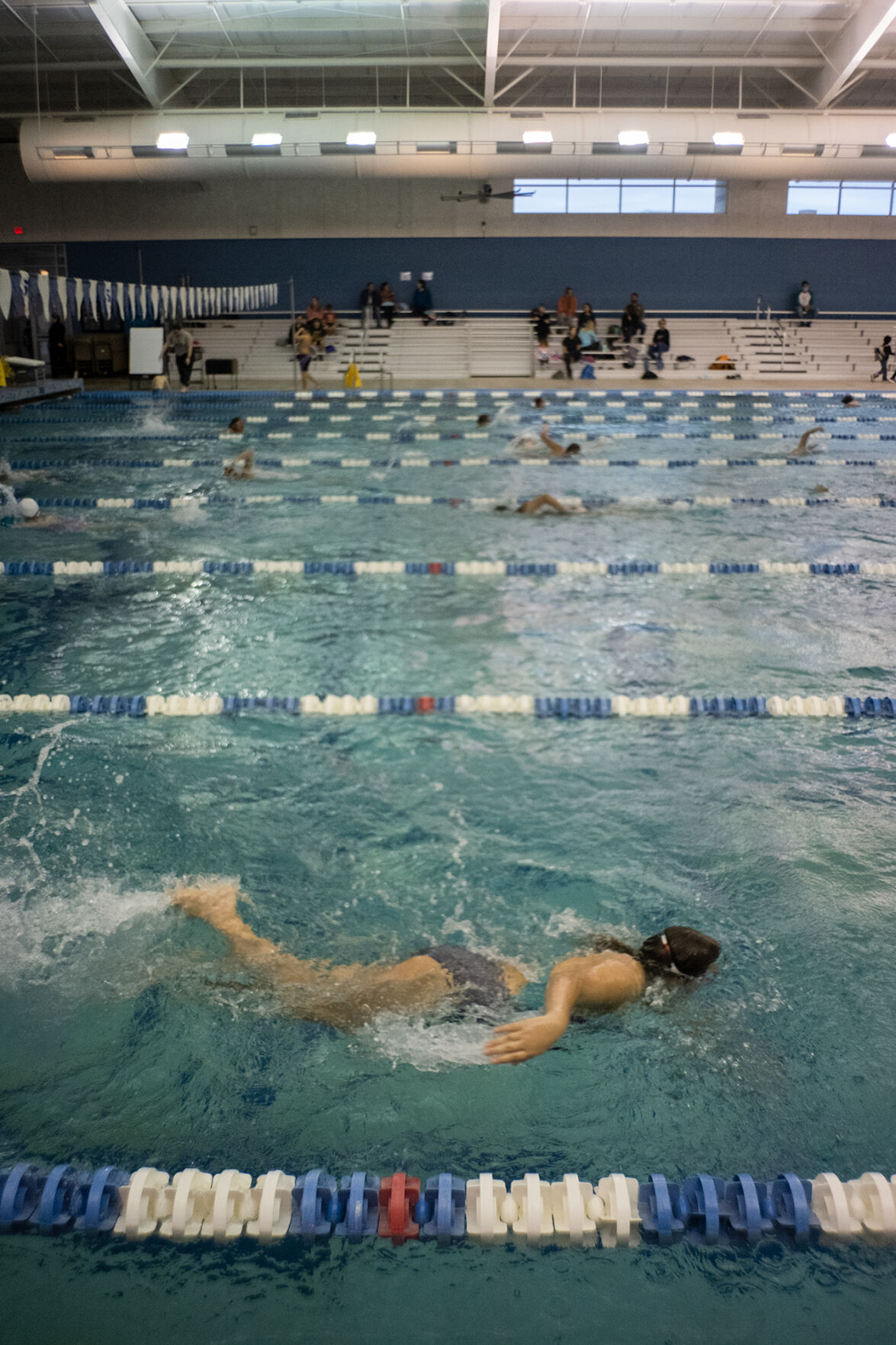 Riley Anders, 12, lower left, is among the first in the water Wednesday during a practice for the upcoming TAAF Winter Games swim meet at the Victoria Independent School District Aquatics Center.

A swimmer’s cellphone sits on the bleachers Wednesday during practice for the upcoming TAAF Winter Games swim meet on Wednesday at the Victoria Independent School District Aquatics Center.

The Shiner-Refugio football game on Dec. 2 was a night the City of Victoria is desperate to replicate.

From an economic standpoint, the game was a shot of adrenaline to the city.

Over 11,000 fans attended the game, meaning they likely bought food or shopped at the mall or rented hotels, etc. on top of getting to watch a historic sporting event.

That was an extreme example, but the city became conscious of what sports tourism can bring to the economy.

With Victoria having won a bid to host the Texas Amateur Athletic Federation Winter Games in 2022, 2023 and 2024, the city is hopeful for another economic surge, like the Shiner-Refugio game, as Victoria continues to promote itself as a site for sports tourism.

“To me, the three year thing is what makes this so exciting,” said Parks & Recreation Assistant Director Kimberly Zygmant, the main TAAF event organizer. “Because, the first year, it’s a really crucial year to get it started and get it going and really bring it to the community. And in the second and third years, is when you get so much more community involvement.”

“I hope that it really puts us on the map for sports tourism,” Zygmant added. “I’m hoping that it contributes to what our community members have to do. With all the sports that we have to offer, the more that we get to have these tournaments, the more that our local community can come out and want to participate in those sports, and see all of that stuff. So we’re hoping that it’s something fun to do and it just helps increase general overall city revenue, as well.”

The TAAF games are held in the summer and winter and feature amateur and recreational athletes competing in various sports throughout the city.

TAAF’s mission statement is to “Create and maintain in the State of Texas a permanent organization representative of amateur athletics and/or organizations, devote there to establish and maintain the highest ideals of amateur sports in the State of Texas, promote the development of physical education and to encourage the standardization of rules of all amateur athletics, games and competitions.”

The games will be played Saturday-Monday and include cornhole, disc golf, fast-pitch softball, pickleball, swimming and wheelchair basketball.

Overall, the city expects 1,000 competitors to attend the games and likely 1,000 more in the form of friends and family members.

Swimmers make up the majority of contestants with 750 attending the Saturday meet.

The games give a fun environment for local competitors to test themselves against people from as close as Corpus Christi and as far as Mississippi.

“You want to try your hardest because it’s not just a normal practice, but you also want to have fun and not just do it for practice,” said Riley Anders, 12, a member of the Victoria Swim League. “I haven’t had the chance to do Winter Games because when I was going to do it I broke my arm.”

For people like Ted Henderson, 56, of Corpus Christi, who competes in disc golf, tournaments like TAAF are another chance to go out, have fun and meet people you might form lasting friendships with.

“It’s like you’re meeting long lost family members, that you knew you had, but you’ve never met before,” Henderson said. “Some people you meet, and you become fast friends. And you stay in touch, and you travel to visit with them sometimes to do disc golf things, and sometimes not. I run a few tournaments a year myself, in the West Texas area, even though I’m from Corpus Christi because there’s a need out there. So, it’s a great community sport is what I would say.”

When it comes to sports like wheelchair basketball, for people like David Crook, 34, the event coordinator and only local contestant, the game is very much about drawing attention to the sport as well as just having a good time.

“I’m totally excited for it,” Crook said. “I really want people to come out and watch it and really like to see more. If we can get more people just in the Crossroads area that know about it, maybe we could get more kids that might have physical disabilities that might not know about wheelchair basketball. That’s my main goal with it. I would love to give kids the opportunity to come out and play, learn. Because there’s all different kinds of adaptive sports. We have an amazing softball field here in Victoria. For wheelchair softball. There’s track and field options. You know, there’s all kinds of sports.”

But the running theme throughout all the games is fun.

The people traveling are wanting to come out and have a relaxing as they tap into their competitive spirits.

“It brings back the competitive nature that I had when I was younger,” said Alex Marroquinn, 29, of Robstown, who plays cornhole. “I feel like it just makes me happy anytime I can compete. I enjoy it. There’s a lot of people like locally play in our area, and that were once better than me And I just try to get better and better.”

The city hoping to see the TAAF Winter Games grow in size in the next few years as it encourages more and more events to come to Victoria.

This weekend’s games are almost a test run to see just what economic impact the games can bring to the city.

“Sports tourism is a great market for us,” said City of Victoria Convention & Visitor’s Bureau Director Joel Novosad. “Victoria’s central geographic location, favorable weather lends itself to a strong sports tourism market. We have a strong lineup of events for this year. We have four hotels here offering special rates for visitors, and we’re expected to see those hotels see high occupancy this weekend. We have a number of restaurants providing discounts and deals for TAAF participants ... It’s a multifaceted involvement. It’s an event that we will learn and grow along with here in Victoria and we expect to see the economic impact do the same as we progress with TAAF here in Victoria.”

This story was updated Jan. 13, 2022 to correct when the city was awarded the bid for the winter games.

Correction: City of Victoria was awarded bid for TAAF games in February

The City of Victoria’s bid to host the TAAF Winter Games was accepted in February. A story on Page A1 Thursday was incorrectly stated when the…