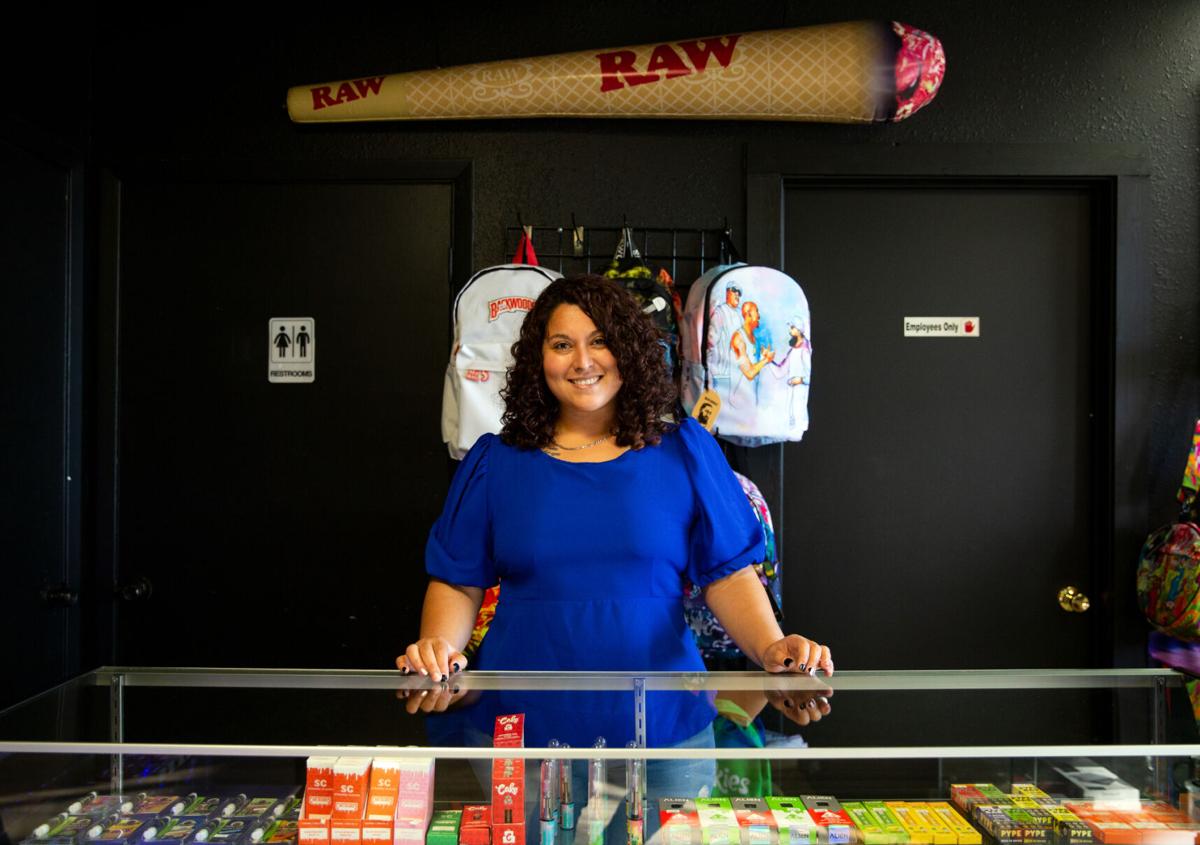 Alexandra Degollado, owner of Faded Smoke Shop, poses for a portrait in front of some delta 8 and delta 10 smoke cartridges. 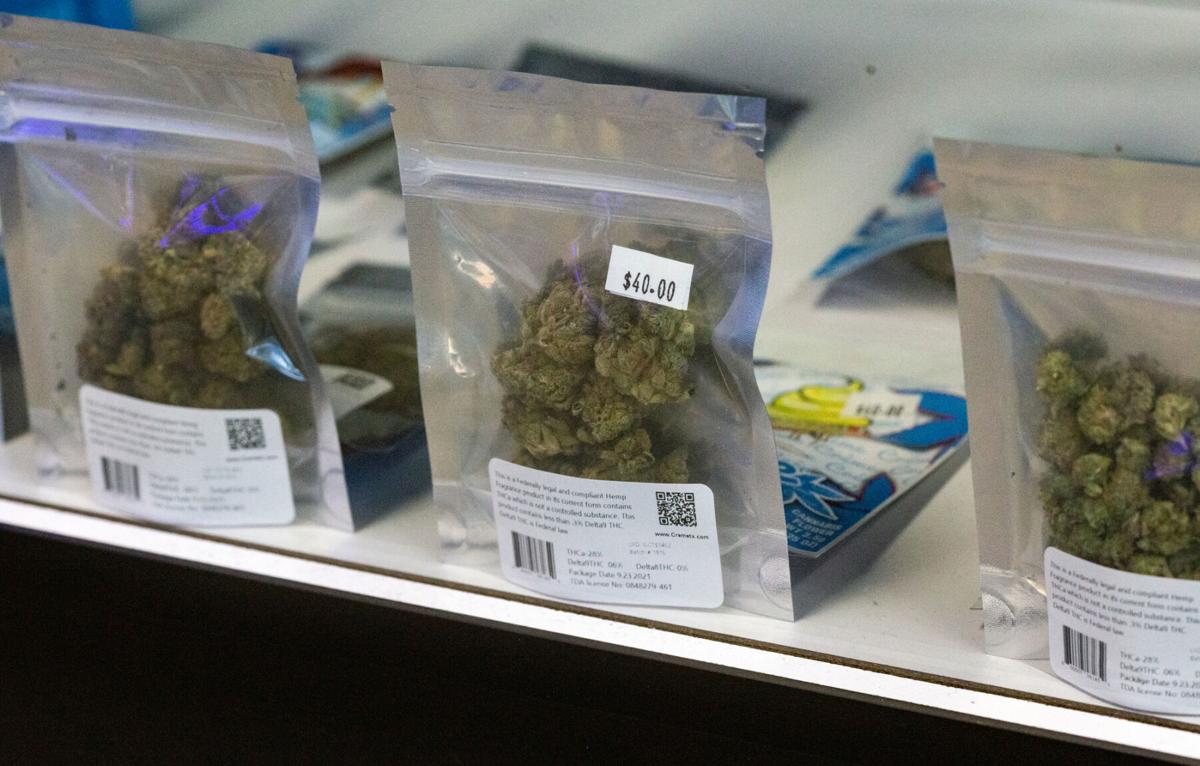 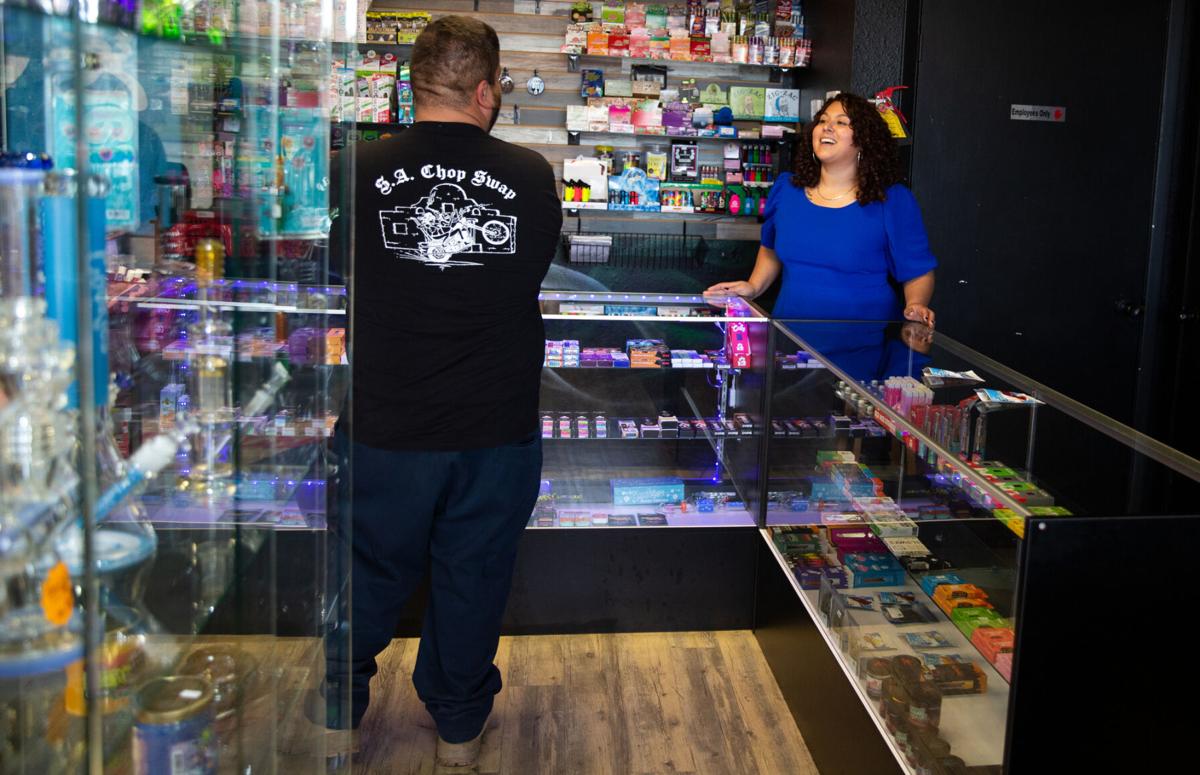 Alexandra Degollado, owner of Faded Smoke Shop, talks to customers inside of her Victoria shop. 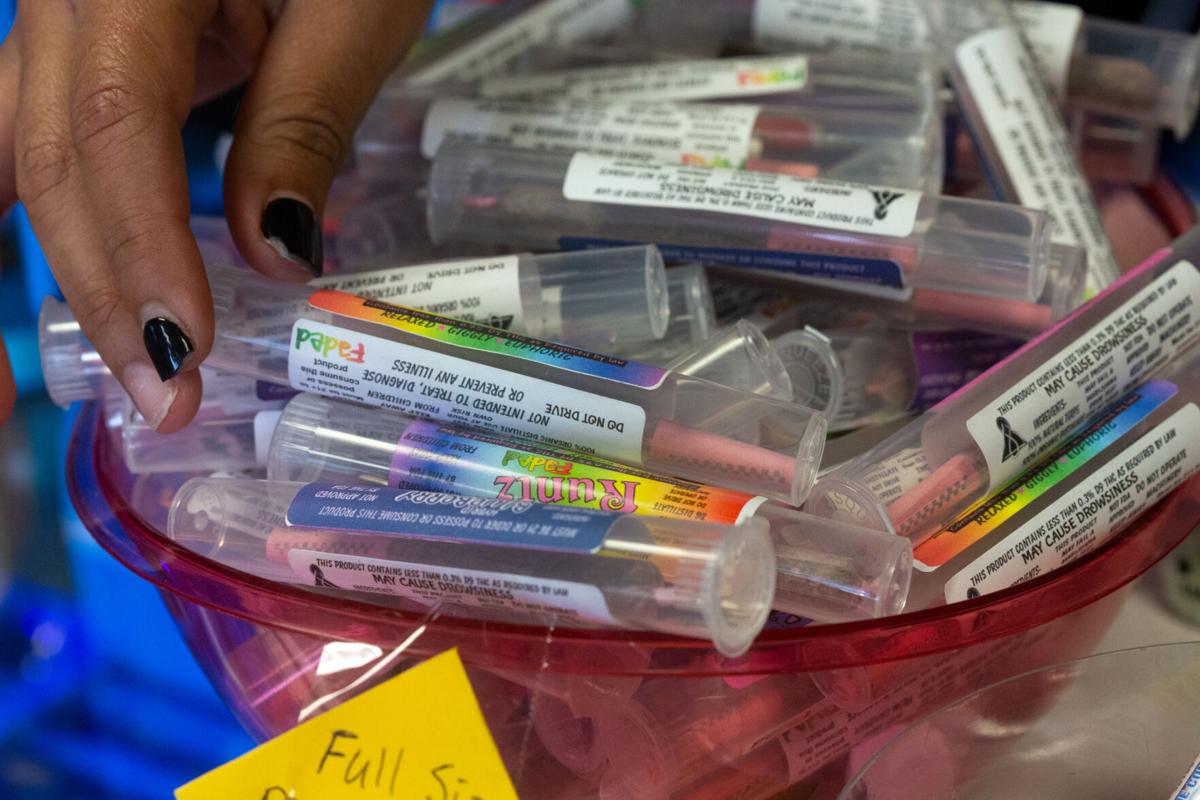 Alexandra Degollado, owner of Faded Smoke Shop, reaches into a bowl containing pre-rolled delta-8 joints inside of her Victoria shop. 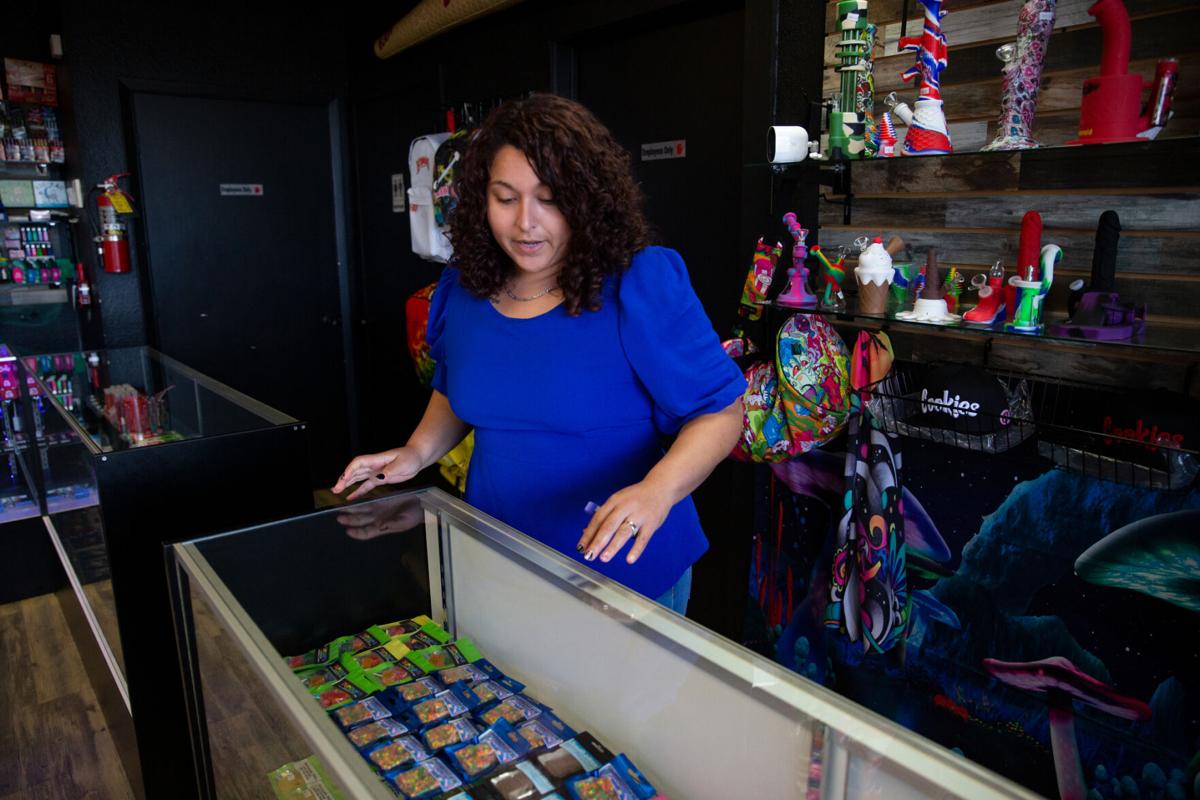 Alexandra Degollado looks over her products inside of her shop. 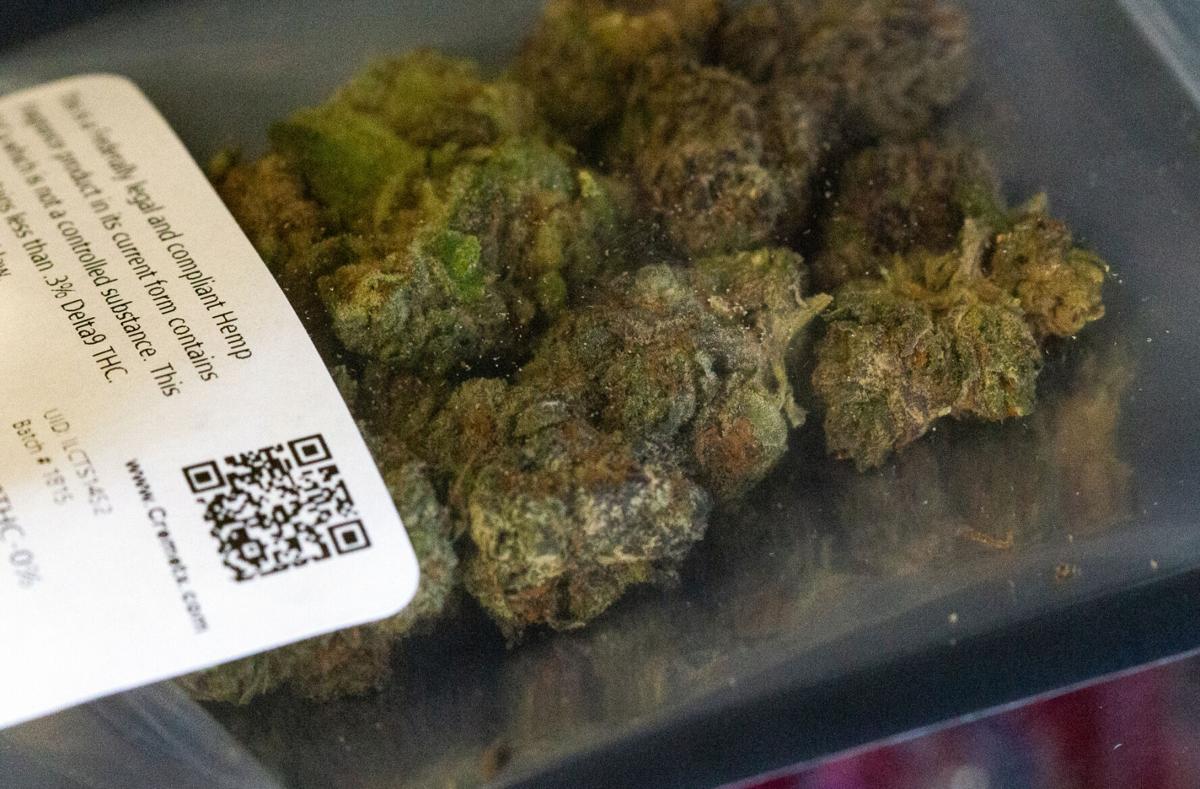 A bag containing THCA hemp flower lies on a shelf inside of Faded Smoke Shop in Victoria. 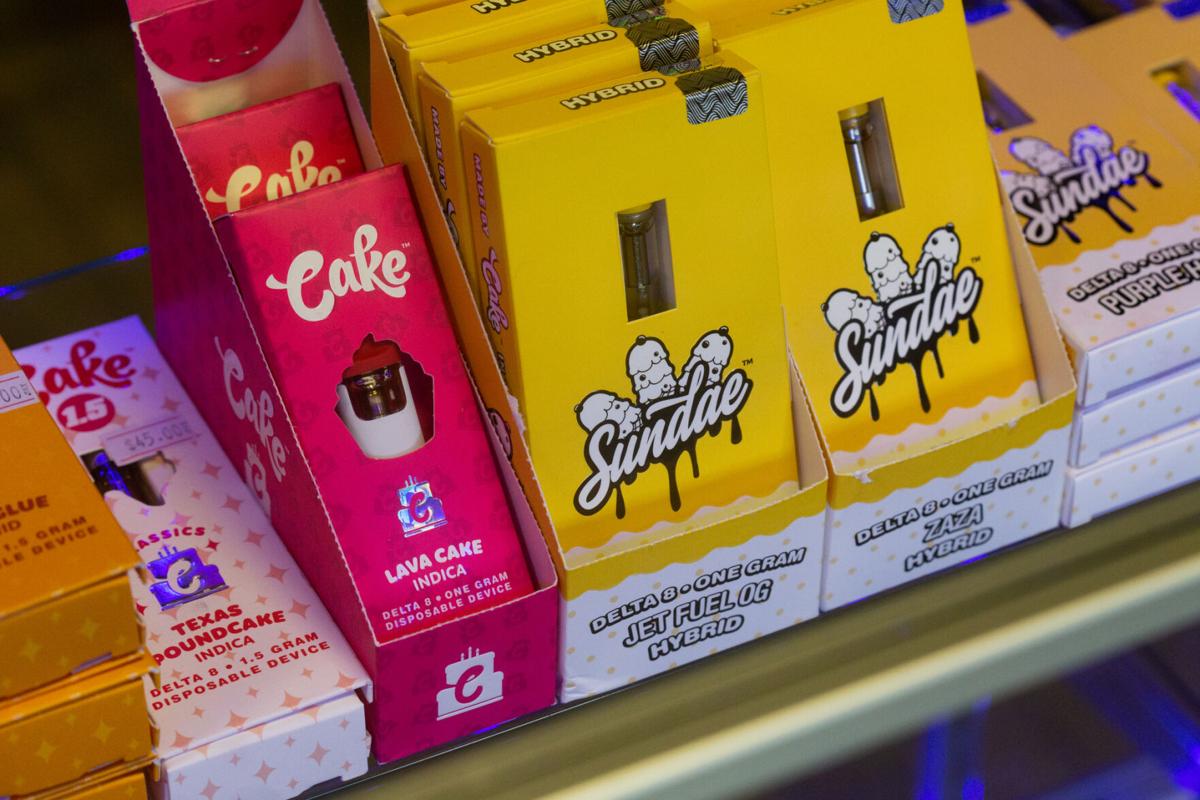 A row of delta 8 products line a shelf inside of Faded Smoke Shop.

Alexandra Degollado, owner of Faded Smoke Shop, poses for a portrait in front of some delta 8 and delta 10 smoke cartridges.

Alexandra Degollado, owner of Faded Smoke Shop, talks to customers inside of her Victoria shop.

Alexandra Degollado, owner of Faded Smoke Shop, reaches into a bowl containing pre-rolled delta-8 joints inside of her Victoria shop.

Alexandra Degollado looks over her products inside of her shop.

A bag containing THCA hemp flower lies on a shelf inside of Faded Smoke Shop in Victoria.

A row of delta 8 products line a shelf inside of Faded Smoke Shop.

In recent months, in the face of confusion over the legality of a certain cannabis derivative, smoke shop owners in Victoria have found themselves on either side of a “line in the sand” when it comes to selling those products.

Some smoke shops have opted to pull them from the shelves, removing signs advertising for the cannabis derivative, delta-8, and special sections within their stores.

Others, like Alexandra Degollado, have chosen to continue selling them.

The confusion began when the Texas Department of State Health Services updated its website in October. The update stated that delta-8 THC products — which many thought were legal — were considered a controlled substance in Texas.

At that point, the confusion for Degollado and other shop owners selling the products in the state began.

“It was really scary because we had done so much to make sure everything was by the books,” said Degollado, who owns Faded Smoke Shop in Victoria and another shop in Port Lavaca. “It didn’t seem real at the time.”

Degollado said she looked to Facebook updates from Hometown Heros, a CBD dispensary based in Austin, that is suing the Texas Department of State Health Services over the additional guidance over the legality of delta-8.

Cannabis plants are categorized as either marijuana or hemp depending on their level of tetrahydrocannabinol, or THC, which is the ingredient responsible for the “high” feeling for users. Hemp has less than 0.3% of THC while marijuana has more than 0.3% of THC.

In 2018, the federal Farm Bill legalized hemp production, leading to the 2019 passage of Texas House Bill 1325, which legalized hemp growing in the state.

Delta-8 is a substance found naturally in hemp. However, it is produced in such low quantities that the substance that can be found in vape cartridges, candy and tinctures is likely manufactured.

Degollado said it is popular because it produces a similar type of intoxication, or “high,” found in marijuana.

However, the state claims delta-8 was made legal in the state. The state health department, in a response to the lawsuit, said its online notice about delta-8’s status in Texas as a controlled drug was made to clear up “confusion” regarding whether it is legal or illegal. The state said the notice was not a “change” to the law.

“(The) plaintiff’s alleged surprise that tetrahydrocannabinol (THC) remains a Schedule I controlled substance does not merit the extraordinary relief of a temporary restraining order,” state health department lawyers wrote in the response to the lawsuit. “THC, including Delta-8 tetrahydrocannabinol (Delta-8), has been a Schedule I controlled substance in Texas for over 40 years.”

Some shops, like Victoria Smoke Shop, which operates two Victoria locations, have chosen not to sell delta-8 products. Others shops said they are awaiting the final say on delta-8’s legality in the Hometown Heros lawsuit, opting to pull products from store shelves in the meantime.

As of December, Degollado is still selling delta-8 products because of the “over good the products do for those in need,” she said. She said she has many customers who rely on those products’ medicinal effects.

“People use it for anxiety and insomnia. I have cancer patients that come here for it … We have people with all kinds of ailments,” she said. “Those folks have thought (delta-8) has been legal this whole time as well.”

In what she attributes to the “grey area” surrounding the substance’s legality, Degollado, is facing criminal charges after police arrested her and searched her now-shuddered shop in Port Lavaca.

In February, Port Lavaca police searched the 1504 W. Austin St. shop and seized more than 1,000 grams of suspected THC products, more than 14 ounces of suspected marijuana flower and more than $4,000 in “suspected drug-related money,” according to a department news release. Degollado and one of her employees, Daniel Herrera, were arrested and charged with manufacture or delivery of a controlled substance between 4 and 400 grams.

Degollado turned herself into the Calhoun County Jail the next day. She then retained a local attorney and an Austin-based cannabis attorney.

In December, Calhoun County District Attorney Dan Heard, who is prosecuting the case, said the test results had not come back from the Texas Department of Public Safety lab. Once that is done, he said, the case will be presented to a grand jury.

Heard declined to answer further questions about the case, including how long test results typically take and whether he intends to continue pursuing these types of cases.

It is unclear if prosecutors in the Crossroads intend to pursue charges against users of delta-8 or smoke shop owners. Local district attorneys did not respond to requests for comment over the course of a week.

Brent Dornburg, a Crossroads defense attorney, said prosecution could depend on the jurisdiction since there are still outstanding questions about delta-8 that have not been answered.

Dornburg said smoke shop owners who continue to sell delta-8 products “should not be surprised” if they end up facing criminal charges.

“It comes with the territory when there is a grey area like this,” he said. “Some owners and prosecutors will wait for a final say before going forward, but there will also be folks on both sides that will proceed anyway.”

Travis County court records show Hometown Hero’s civil case was appealed to the Texas Supreme Court. A hearing lawsuit is set for late-January, according to a post from the business’ social media. That date, however, is subject to change.

Dec. 20, 2018: The federal Farm Bill was signed into law, allowing for the sale of hemp

Sept. 1, 2021: HB 1535 went into effect, which expands the conditions eligible for medical cannabis in Texas

Sept. 14, 2021: The Centers for Disease Control releases a health warning about delta-8 THC

Oct. 15, 2021: The DHSH updates its website to label delta-8 as a Schedule I controlled substance

Oct. 20, 2021: Hometown Hero sues the state to put a temporary restraining order on the ban

Nov. 8, 2021: The court grants Hometown Hero’s application for a temporary injunction. Delta-8 is temporarily not classified as a controlled substance and businesses can legally sell hemp-derived delta-8 products with less than 0.3% THC.

Present: The November 8 injunction will last until the conclusion lawsuit