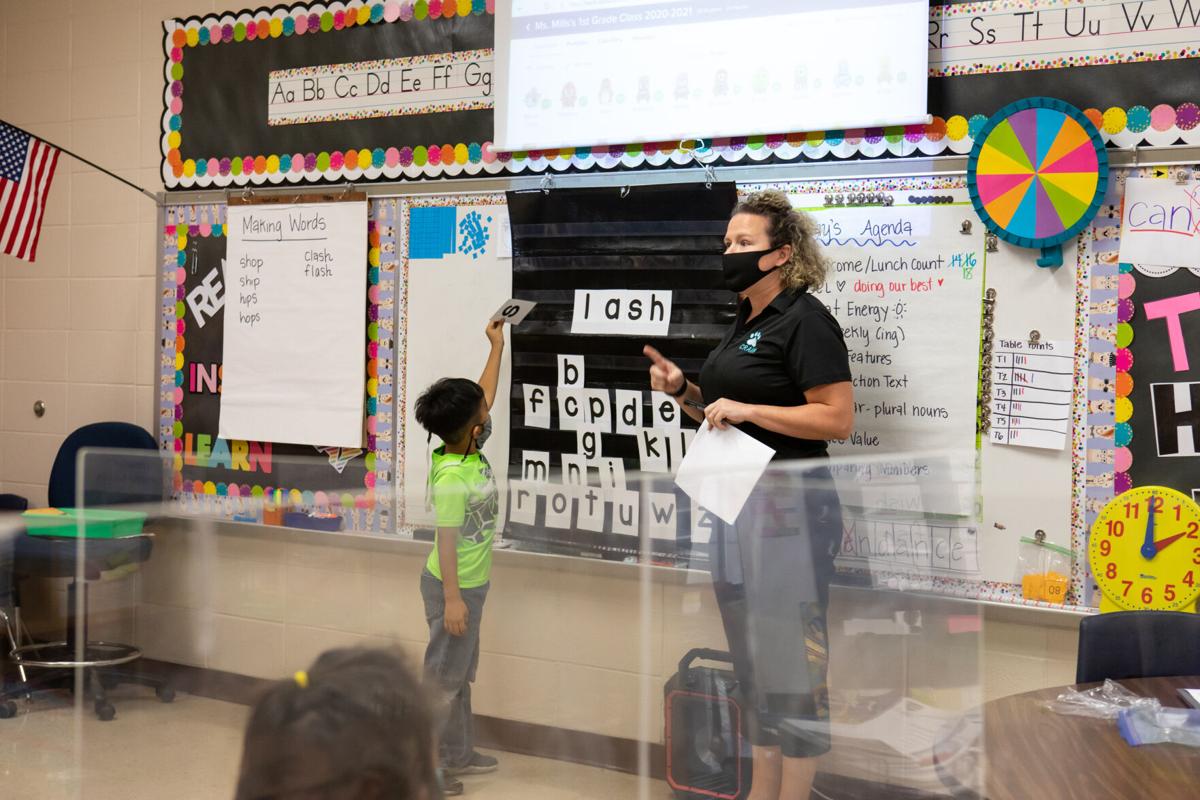 Jorge Villegas, left, begins to spell out the word “splash” during a lesson in Erin Mills’ first grade class at Crain Elementary School on Oct. 13, 2020. 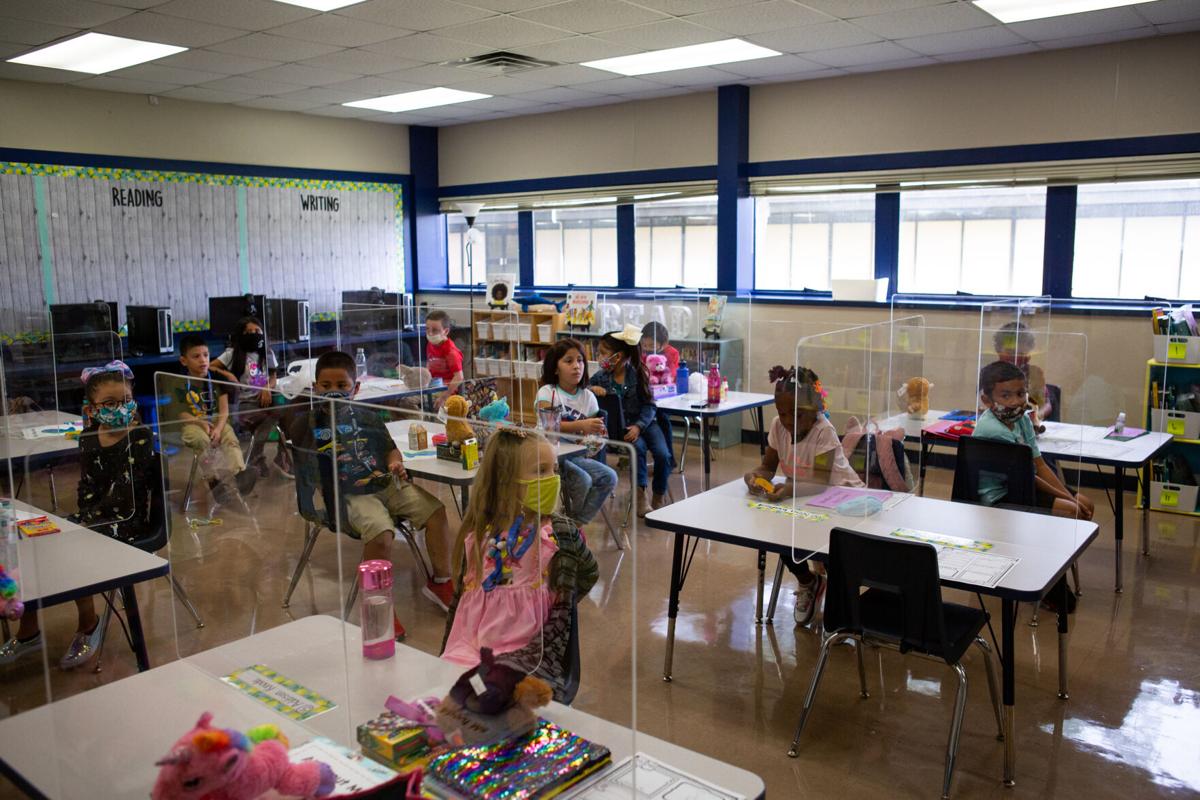 Plexiglass dividers separate students at their desks in a first-grade class at Shields Elementary School on Sept. 8, 2020. 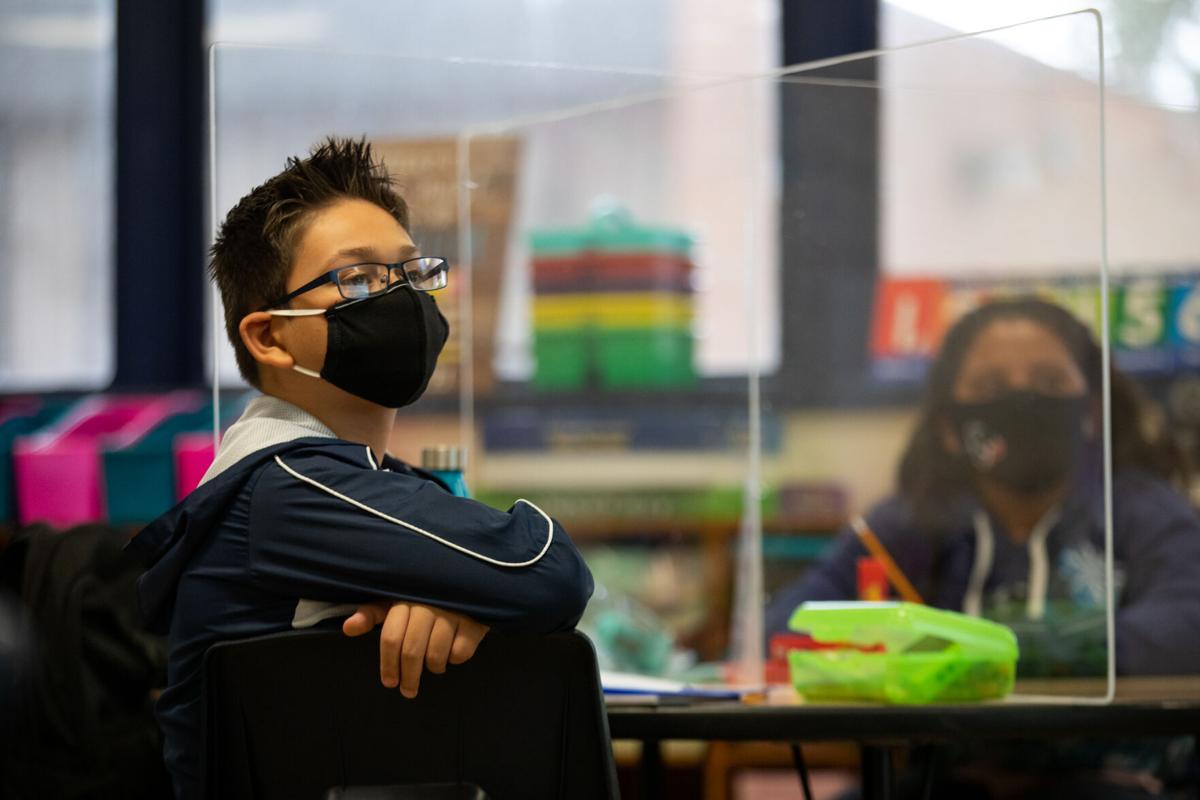 Alvin Richhart listens to his fourth-grade teacher during class at Shields Elementary School on Sept. 8, 2020.

Jorge Villegas, left, begins to spell out the word “splash” during a lesson in Erin Mills’ first grade class at Crain Elementary School on Oct. 13, 2020.

Plexiglass dividers separate students at their desks in a first-grade class at Shields Elementary School on Sept. 8, 2020.

Alvin Richhart listens to his fourth-grade teacher during class at Shields Elementary School on Sept. 8, 2020.

Victoria students regressed in both math and English standardized state testing after a year of disrupted learning.

The State of Texas Assessments of Academic Readiness, or STAAR, scores were released last week, and they showed most students struggled to pass the math test. It is the first glimpse at the learning gaps caused by the pandemic.

“We did see regression across content areas,” said Tammy Sestak, the Victoria school district’s assistant superintendent of curriculum, instruction, and accountability. “But that trend is true for the state, as well.”

Statewide, about four out of 10 Texas public school students failed the standardized state math exams. State data shows that students who learned virtually struggled more than those who learned in a standard classroom setting.

The rate of students who meet or master content also dropped this year compared to spring 2019 test scores. The test was not administered in 2020. It is administered to third through eighth graders.

“We can’t look at our STAAR scores this year through the same lens that we have in the past because it wasn’t a typical year,” Sestak said.

At Victoria’s school district, seventh graders struggled the most with the mathematics STAAR exam. About 69% of students did not meet testing requirements. About 31% of students approached grade level with 5% actually meeting grade level performance. No students mastered the content area.

In Spring 2019, 51% of students did not meet requirements while 49% approached grade level.

“In seventh grade math, you’re learning things you haven’t seen exactly how to do content in math,” Sestak said.

The state puts students in four performance categories based on the STAAR results. These categories include “did not meet,” “approaches,” “meets” and “masters.” “Approaches” is the lowest level of passing, but it does mean the student will require intervention and more tutoring, Sestak said. “Meets” means the student understands the content and will not need intervention. “Masters” is the highest grade a student can receive on the STAAR test.

In eighth grade, about 51% of students did not meet performance requirements, which is about 28% less than spring 2019.

The state will not issue accountability ratings with the most recent scores.

“We weren’t surprised by (regression),” Sestak said. “We knew that we were going to see that.”

Many factors contributed to the drop in test scores.

Remote learning and social distancing were leading causes for the scores, Sestak said.

“The students that were learning remotely did their absolute best, but it’s just not the same, especially for young kids, as being in the classroom,” she said.

Quarantining students also contributed, Sestak said. Students would move from in person to remote learning for 10 days, and that disrupted their learning.

Safety measures, as well, led to lower test scores, she said. Students and teachers could not sit side-by-side and work one-on-one like they had in previous years. Students worked behind plexiglass barriers and worked individually more than in groups.

Campuses couldn’t pull students out of their classroom for specific intervention because of fear of exposure of the virus. Intervention would allow teachers to pull out students from multiple classrooms struggling in the same content area like reading or math. During this time, students would get help with specific problems at a slower pace.

Outside of STAAR, the district saw kindergarten and first graders struggle with reading. It is a huge area of concern for district officials, Sestak said.

“They missed the last nine weeks of their kindergarten year, and then their whole first grade year was just kind of topsy turvy,” she said. “So for reading, it’s really the younger kids that are just learning to read.”

The goal now is to take the scores and determine how and where to address student needs.

“This year, the data really is to be used for planning moving forward,” she said. “We’re not using it to look backwards, but we’re using it to get a good gauge of where we are now and then develop a plan for how we are going to address, and we call it unfinished learning.”

Sestak said the district will implement a new phonics program for the younger students who struggled with reading. It will be focused on incoming second graders, who fell behind in first grade.

Incoming second graders will have time worked into their schedule for them to catch up on what was missed during their first grade year, Sestak said.

“We’re trying to identify those patterns, and then using those patterns to move forward and make a plan for how to address the areas of concern,” she said.

Community should look beyond STAAR scores

As a community, we should look beyond state test scores and instead look at what they mean.