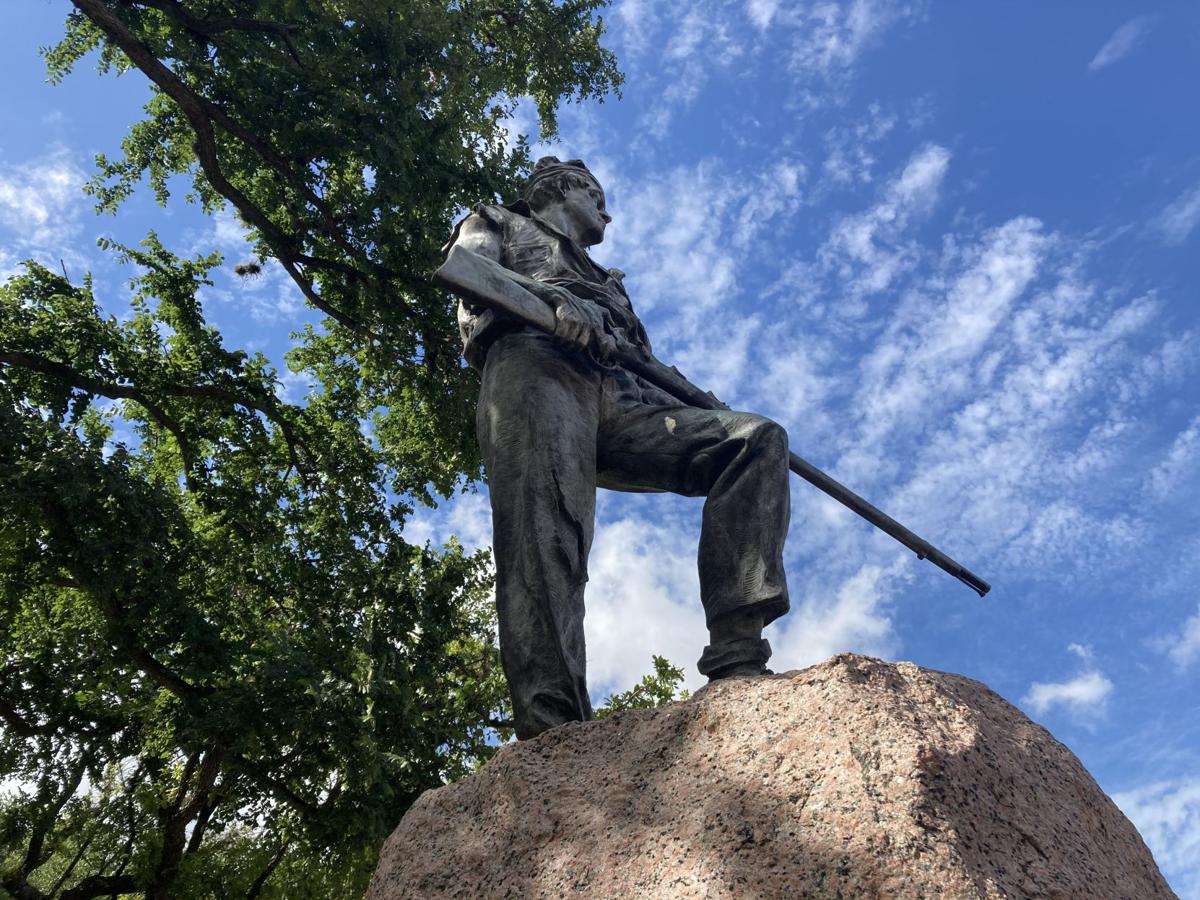 This Confederate monument stands on the southeast corner of DeLeon Plaza. 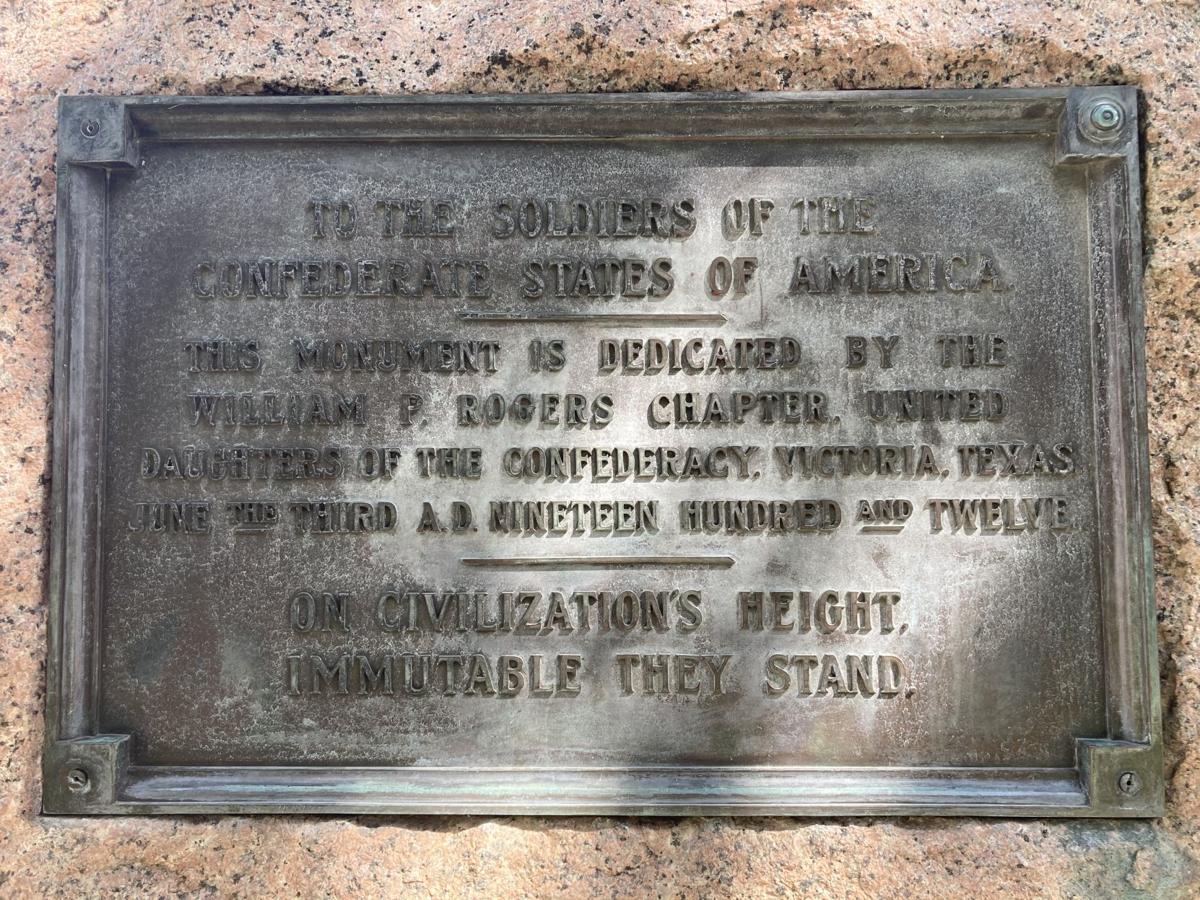 The plaque on Victoria’s Confederate monument is dedicated “To the Soldiers of the Confederate States of America.” It reads “On Civilization’s Height, Immutable They Stand.” 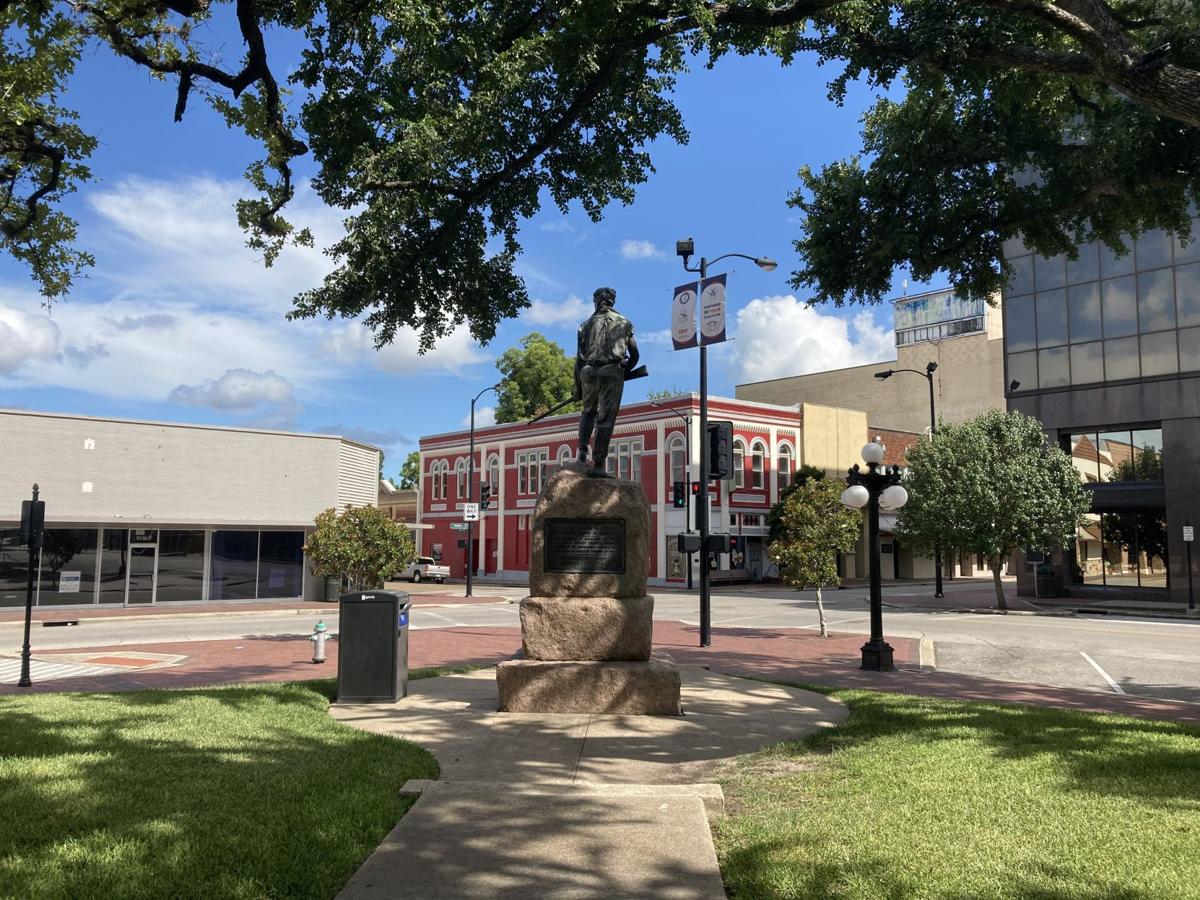 The monument was given to Victoria by the United Daughters of the Confederacy and dedicated in July 1912.

This Confederate monument stands on the southeast corner of DeLeon Plaza.

The plaque on Victoria’s Confederate monument is dedicated “To the Soldiers of the Confederate States of America.” It reads “On Civilization’s Height, Immutable They Stand.”

The monument was given to Victoria by the United Daughters of the Confederacy and dedicated in July 1912.

A group of Victoria residents will present a formal proposal at the July 21 City Council meeting that calls for the removal of the Confederate monument in DeLeon Plaza.

“At this point, we’re trying to have an open dialogue,” said Kim Pickens, a local homeless advocate who helped organize the June 7 Black Lives Matter protest and is one of the residents calling for the statue’s removal. “Victoria has changed a lot, and we feel like a statue that is specific to the Confederacy is not how we want to be viewed as a city.”

The monument, which depicts an unnamed Confederate soldier, was dedicated by the United Daughters of the Confederacy in 1912. On the back, a plaque dedicating the statue to Confederate soldiers reads, “On Civilization’s Height, Immutable They Stand.”

The confederate statue in downtown Victoria Texas honors those who fought to protect the institution of slavery and to preserve the culture of white supremacy.

To honor slavery and white supremacy is insulting, hurtful and demeaning to Victoria’s African American community.

Why not have a plaque on the back deploring the words at the dedication " The Texas-born Confederate general Felix H. Robertson reportedly told the crowd, “After all the why’s and wherefores are weighed, the ultimate cause of the war was the race question, and the boys in grey fought valiantly to make this what it is – A White Man’s Country.” The Weekly Advocate said the statement was “warmly received” by the crowd."....Why are those who want the statue to remain skirt around the issue in trying to have a soft landing? Address the elephant in the room and then proceed.

Look, some people do not care how others may view those comments and what they represent. They feel proud of their heritage and they will fight to keep these things up. At this point, I’m just glad the south lost. I guess they need reminders of losing

Texas is a Confederate States no ifs, ands, or buts about it. You can remove the statues, monuments, forbid flying the Confederate flags, renaming streets and schools, forbidding schools songs/mascots and burning books, you might even want to rename the State of Texas...BUT,Texas will always be a Confederate State.

You are wrong. Texas is not a Confederate state. There are no Confederate states anymore. They stopped being Confederates the moment General Lee surrendered. Civil War over. The South lost. Done. Finished. Kaput. Nada. Over. Gone.

It's Confederate propaganda pure and simple. It needs to be placed in a museum. If we must have a statue let it be of Senor DeLeon.

I support leaving the soldier at it's current location.

Ok let’s acknowledge the words that were said on Lincoln’s first inaugural address. People life’s, thought, etc. at different times in history. People will look back at this time in history as say, What The Heck???

Can't they rededicate it "to those who died" and leave it at that?

Anonymous poster Whad Yver,How About acknowledging the words that were used during the dedication. Let’s start at A before we go to B

.Patriot? Is that an oxymoron? How can a confederate soldier be a patriot if he fought against his own country? I like to point to actual examples like the statue in Victoria. I have read up on the Daughters of the Confederacy and others who might have hijacked the " The Last Stand" you lnow like the KKK hijacked religion.

The United Daughters of the Confederacy (UDC) is an American hereditary association of Southern women established in 1894 in Nashville, Tennessee. The stated purposes of the organization includes the commemoration of Confederate States Army soldiers and the funding of the erection of memorials to these men. Many historians have described the organization's portrayal of the Confederate States of America (CSA), along with its promotion of the Lost Cause movement, as advocacy for white supremacy,[1][2][3][4][5][6] and have asserted that promotion of the Confederate tradition has been led by the UDC.[7] Until recent decades, the UDC was also involved in building monuments to commemorate the Ku Klux Klan.[6][8]...Wiki