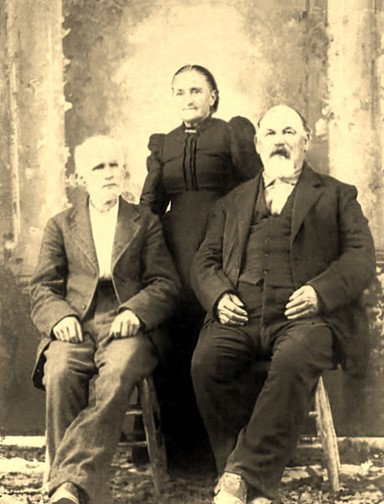 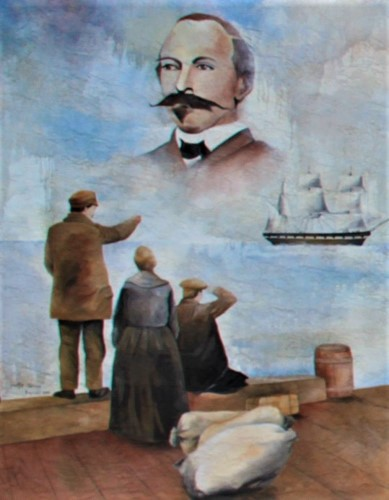 A section of a mural of the side of Haby’s Bakery in Castroville painted by Patrice Hoff in 2000 in honor of the four thousand Alsatians Henri Castro brought to Texas from France, Germany and Switzerland. Photo by Katy Bluntzer Gray with permission of bakery.

A a mural of the side of Haby’s Bakery in Castroville painted by Patrice Hoff in 2000 in honor of the four thousand Alsatians Henri Castro brought to Texas from France, Germany and Switzerland.

A section of a mural of the side of Haby’s Bakery in Castroville painted by Patrice Hoff in 2000 in honor of the four thousand Alsatians Henri Castro brought to Texas from France, Germany and Switzerland. Photo by Katy Bluntzer Gray with permission of bakery.

A a mural of the side of Haby’s Bakery in Castroville painted by Patrice Hoff in 2000 in honor of the four thousand Alsatians Henri Castro brought to Texas from France, Germany and Switzerland.

Victoria was not the Bluntzers’ original destination when they debarked after a long two-month sail on the Heinrich with 127 other passengers.

But it would become home for the family of Peter Bluntzer until he bought land and settled on Twelve Mile Coleto Creek in now DeWitt County. The immigration of Alsatians to a colony west of San Antonio began in 1842 after Sam Houston granted Frenchman Henri Castro a grant to settle newcomers in the Republic of Texas.

Therese Jacob Bluntzer had been riding on one of the wagons headed for San Antonio when a wheel spoke broke crossing a stream near Victoria.

Tossed into the rock-strewn creek, she damaged her side so badly, the Bluntzers had to drop out of the caravan heading northwest. In the publication Texas, the Country and Its Men, it reads, “[Peter] remained for some time at Victoria and bought a tract of land on the Coleta (sic) Creek from John Pettus.” That was in 1845.

The Bluntzers arrived in the spring of 1844, their goods in six carts. Only one passenger at a time could ride with the carter the 45 miles from Port Lavaca to the fledgling town of Victoria. The rest walked.

If the prairies were dry, it took a week. In rainy season, the carts would sink down in bog holes and had to be unloaded, pulled out and reloaded on drier ground. They luckily made that leg of their journey in about a week.

Auguste Fretéllière, who had debarked the previous month from the Jean Key, described Victoria as having 30 or 40 houses. “Nearly all of the basic residence construction was of split puncheons and round poles, cracks daubed with mud and moss”.

Despite this, even then, the town was quite cosmopolitan in its makeup. Founded by rancher and empresario, Martin de Leon with his wife, Patricia, it was predominantly Hispanic, but was quickly being filled with immigrants. At that time local Indians roamed its streets and were, until they felt the economic press of the immigrant population, on good terms with the settlers.

Indian dialects, Spanish, English and German were spoken in its streets. Alsatian, Peter’s language, was a Frenchified dialect of German. From the Deep South came a mix of English and Black African Gullah spoken by the slaves. Southerners had moved their slaves from depleted soils of their plantations to the sandy loam soils of Victoria where cotton could be more profitably be grown. Arriving on the outskirts of the small village, the Bluntzers would have seen the green fields of cotton.

While Therese was recuperating in Victoria, Peter with his older sons, explored the countryside. He fell in love with the area around Meyersville. John Pettus, like many other Independence War veterans, was paid for his service in land--which Texas had plenty of, instead of money that the Republic had little of. Peter bought acreage from Pettus on the Twelve Mile branch of Coleto Creek and began his homestead. Not long after the family would become involved in the turbulence that defined the times.

In 1846 his oldest two sons, Leo and Urban, joined General Taylor on the beach near Kinney’s Rancho, now Corpus Christi, training to fight in the Mexican American War. Leo died in the bloodiest battle of that war, Buena Vista.

Urban returned, having perfected his skills of interpreting for the newly enlisted Germans who had yet to learn English. He would soon become known and used for his skill from the coast to New Braunfels.

At about this time, Theresa Bluntzer, the second oldest daughter, was kidnapped from the creek bed where she was playing at about the age of nine. The family had no clue why she had disappeared and after many months, gave her up for dead.

Then between two and three years later, they found her wandering in a grove of hackberry trees near the Bluntzer cabin. She had been returned because an Indian Peter had pledged lifetime friendship with saw a blonde girl playing with the other Indian children (likely Karankawa or Tonkawa). On asking, he found she was the missing Bluntzer child. Her father had given that chief corn one winter when his clan was hungry. Theresa’s return was his gift of gratitude.

The oldest daughter, Genevieve, married Michael Rehm from Bavaria. He, Urban, Nicholas and the youngest son, Sixtus all signed up or were drafted to fight for the Confederacy. Texans had to sign up, freight cotton, flee to Mexico, fight Indians, or be killed. Of course, a few who managed to escape Southern recruitment signed up for the Union.

John Arnold, the husband of Peter’s youngest daughter, instrumental in developing Weser, between Victoria and Weesatche, also enlisted. It was ironic these men were pulled into the fight. Avoiding military enlistment to fight and die in an ever-present war was one of the main factors in causing immigrants to leave the Old Country.

Third son Nicholas Bluntzer married Justina Peters, a single female Peter had brought back from Alsace to marry one of his sons. Peter had returned to Alsace, France twice to bring back other Alsatians. Just before the Civil War, Nicholas married Justina and bought land on Nueces River.

Afterward he would raise cattle and trail them first east to Louisiana and then north on the Chisholm and Western Trails. Because of his work in the area the town of Bluntzer, Texas, would be named after the family. He would later be inducted into the South Texas Cowboy Hall of Fame.

The Bluntzers lived in the hard times of developing Texas, not the least of which was the decade of Reconstruction after the Civil War. Soldiers of the Fifth Military District thought little of punishing the locals by taking their possessions, be it food or jewelry, even when people were present in their homes.

Resentment bred reaction and added to the violence of the Taylor-Sutton Feud. Sixtus, would be in Cuero trading farm goods with his sons. The rivaling clans were shooting it out again, this time from two Cuero buildings. Fortunately, on this occasion, a level-headed Sheriff Snell stopped the killing by talking each side into departing “on their honor” peacefully at his given signal.

Peter had been successful in encouraging about 200 other Alsatians to come to Texas. Some debarked at New Orleans, others at Indianola and Port Lavaca. He had the support of his wife, Therese and his sister-in-law, Genevieve in this venture because, as historian Noah Smithwick wrote, “Men talked hopefully of the future; children reveled in the novelty of the present; but the women—ah there was where the situation bore heaviest”. The women missed their friends and the amenities of the Old Country the most. He quoted a woman as having said, “Texas is heaven for men and dogs, but a hell for women and oxen”.

And yet the immigrants endured. The Bluntzer clan spread out, marrying into other Old Country immigrants and settlers from the United States. Meyersville, today in DeWitt County, had been carved from Victoria and its two other neighboring counties, Goliad and Gonzales, after the Bluntzers had arrived.

This story was written as a feature from Katy Gray's book, Nine Alsatians in South Texas: 1843-1900.

Thank you! You've reported this item as a violation of our terms of use.

Error! There was a problem with reporting this article.

This content was contributed by a user of the site. If you believe this content may be in violation of the terms of use, you may report it.

Thank you for this article. Theresa Jacob Bluntzer was the sister of my 2Xgreat-grandfather, Henry Andrew Jacob Sr.